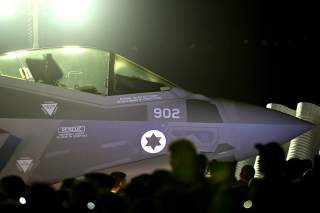 Following the announcement of a $110 billion arms deal with Saudi Arabia, President Trump is reported to have “underscored the United States’ ironclad commitment to Israel’s security, including to the maintenance of Israel’s Qualitative Military Edge” during his May 22 meeting with Israel’s Prime Minister Netanyahu. U.S. Secretary of State Rex Tillerson is also reported to have said there was “nothing entered into with the arms sales agreements with the Kingdom of Saudi Arabia or any of the other countries that do not fully allow us to fulfill our commitments to Israel and the longstanding security arrangements we have with Israel.”

The fanfare surrounding the announcement of this huge arms deal obscures the fact that Israel’s air superiority, which remains the key component of its Qualitative Military Edge, is already in the process of being eroded from the growing sales of large numbers of advanced fighter jets to Arab countries over the last five years.

With hundreds of advanced fighters armed with thousands of air-to-air missiles and tens of thousands of precise guided munitions at its disposal, a Sunni Arab aerial coalition could inflict high losses on Israeli aircraft, cause considerable damage to its vulnerable civilian and military infrastructure, and make the fight for air superiority more difficult and costly—this even with the F-35 fighter at Israel’s disposal.

The F-35 alone cannot completely offset the destructive power of the growing quantity of qualitative Arab aerial offensive capabilities. Such a confrontation would leave Israel with serious damage. However, the recent decision by the Israeli security cabinet, to increase the number of F-35s Israel will purchase from thirty-three to fifty, is important. A larger number of these planes will certainly contribute to Israel’s aerial strength and help it prevail.

However, it is imperative that Israel have a regional monopoly on the F-35 fighter well beyond the next decade. Without this monopoly, Israel will lose its already narrowing air superiority altogether.

The Balance of Aerial Capabilities

If pending fighter deals with the Gulf states are implemented in the coming years, they will possess a large quantity of formidable U.S.-made air capabilities. The combined number of advanced U.S.-made fighters in their possession is expected to stand somewhere between 250 and over four hundred. These include between thirty-six and seventy-two new F-15s for Qatar, twenty-eight to forty F-18s for Kuwait, 154 F-15 SAs to Saudi Arabia, seventeen F-16s to Bahrain and thirty F-16s to the UAE. The advanced configuration of these fighters includes the advanced Active Electronically Scanned Array (AESA) radar, sophisticated avionics, thousands of lethal air-to-air missiles, and tens of thousands of standoff air-to-ground precise and autonomous munitions.

All in all, current and pending advanced fighter deals, including enhanced radars and avionics, precise guided munitions (PGMs) and air-to-air capabilities, could add up to between 450 and 510 over the next few years.

Given this accumulation of advanced offensive aerial capabilities (“quantity of quality”) by Sunni states, Israel’s traditional qualitative advantages in the air are being eroded. Technologies that once gave Israel a distinct advantage, including advanced airborne radars and avionics, air-to-air missiles, long- and short-range PGMs, aerial detection, tracking and air defense systems, are all becoming increasingly present in growing quantities across the region.

This is a fundamental game changer regarding Israel’s ability to defend its airspace and successfully interdict enemy aircrafts. Israel’s vulnerable military and civilian strategic infrastructures could become increasingly exposed to precise targeting from long-range PGMs and standoff capabilities. This is a recent development that is not fully balanced or canceled out by Israel having the F-35 at its disposal.

Given these new capabilities, the Israeli Air Force (IAF) will need to actively prevent the launching of long-range missiles from well within Sunni Arab airspace, as well as the use of shorter-range Joint Direct Attack Munitions (JDAM) from the proximity of Israel’s borders. This will necessitate regional air-to-air superiority.

Given the number of advanced fighters that the IAF will face, equipped with a deadly combination of advanced AESA radars and thousands of Advanced Medium-Range Air-to-Air Missile (AMRAAM/AIM-120) and AIM-9X Sidewinder missiles, air-to-air superiority will be difficult and costly to achieve and maintain.

Additionally, Israel would not be facing inexperienced or unprofessional adversaries. The air-warfare proficiency of the Arab states continues to improve as they gain experience in air campaigns against ISIS in Syria, Iraq, Libya and the Sinai, as well as against the Houthis in Yemen. Arab air forces are gaining valuable operational experience, and are working towards consolidating their interoperability and their ability to act cohesively in coalitions.

Furthermore, the air-defense capabilities of the Arab countries are also undergoing considerable upgrades. Saudi Arabia, Qatar and the UAE are in the process of acquiring PAC-3 or THAAD air defense systems, with Qatar also purchasing the AN/FPS-132 advanced early warning radar. Egypt is also in the process of operationalizing the S-300 system it ordered from Russia. That will improve these countries’ abilities to detect Israeli fourth-generation fighters operating in their airspace, as well as to defend against them.

Though the F-35 gives an advantage in overcoming Arab antiaccess and area-denial capabilities, given the number of advanced fighters at the disposal of a possible Arab Sunni coalition, the geographical spread and the type of missions needed, Israel would not be able to solely field its F-35s, but rather would need to combine its older F-16s and F-15s in its defensive and offensive operations.

Thus, within the context of the changing balance of advanced capabilities in the region, the F-35s will certainly be an important contribution to Israel’s aerial strength. However, balanced against this qualitative advantage is the aggregate “quantity of qualitative” aerial capabilities that will be at the disposal of an Arab Sunni coalition. Thus, even with the F-35s, Israel will be hard pressed to achieve and maintain air superiority and prevent the infliction of large-scale damage to its home front and critical infrastructures.

Though it is fair to assume that Israel would not be defeated in the air, its ability to conduct effective offensive and defensive aerial operations would be seriously curtailed, and the human and material costs would likely be significant. Given the basic asymmetries that exist between Israel and the Arab countries, the latter do not need to be on par with Israel to be able to inflict substantial costs. The aftereffect of such a costly outcome would be regionally and politically detrimental for Israel.

The Reversibility of Intentions

Paradoxically, the ongoing buildup of advanced Arab aerial capabilities is taking place at a time when Israel’s relations with Arab states are relatively constructive. The implications of the Iranian nuclear deal and Tehran’s subversive regional behavior, the fight against the Sunni military extremism of ISIS and others, and concerns about a resurgence of the Muslim Brotherhood have all created what may be an unprecedented convergence of interests between Israel and the Sunni Arab states.

Subsequently, under present circumstances, it is difficult to imagine the exact contours of a resurgent hostile Arab Sunni coalition against Israel. However, as the unforeseen regional events since 2011 reaffirm, we need to be very cautious regarding our ability to assess the directions and swiftness of future developments.

Given the basic hostility towards Israel in Arab public opinion and the absence of people-to-people relations, the sources of stable nonbelligerence between Israel and the Arab states are weak, and depend upon a temporary convergence of strategic interests.

All the pragmatic Arab states, including Egypt and Jordan, with which Israel has peace treaties, continue to face significant internal and external challenges. With the Middle East continually demonstrating a propensity for dramatic changes, the long-term stability of the current accommodative relations between Israel and the Sunni states is far from a forgone conclusion. A hostile change of intentions towards Israel by these states, possessing large quantities of qualitative offensive aerial capabilities, could dramatically and rapidly increase the threat to Israel from the air.

The erosion of Israel’s air superiority weakens a traditional military advantage and a prominent pillar of its deterrent posture. While hostile intentions could develop rapidly, for example, through regime or leadership change, the time needed for Israel to implement a counterforce buildup would be lengthy. Though presently assessed as a low-probability scenario, it would come with very high consequences. Therefore, Israel needs a hedging and offset strategy that would better prepare it for such a contingency.

From a capabilities perspective, Israel needs to remain the sole recipient of the fifth-generation F-35 in the Middle East well beyond the next decade. This fifth-generation fighter jet is a qualitative capability that can give Israel relevant advantages if it ever needs to face the impressive array of aerial capabilities being built by the Arab Sunni countries, and it certainly adds a deterrent value.