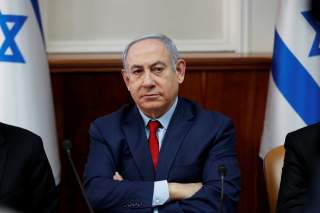 While Americans are agonizing over the wisdom of killing Iranian Quds Force leader Qassim Suleimani, and debating how to respond to the likelihood of Iranian retaliation, Israelis are unabashedly delighted that the man who has coordinated both Hezbollah and Syrian militia attacks on their territory is no longer alive. Both the Israeli leadership, notably Naftali Bennett, the newly appointed hard-line minister of defense, and Israeli politicians across the political spectrum—with the notable exception of some Arab leaders—have welcomed the death of a man whom they have considered Israel’s most dangerous arch-enemy.

For their part, the Iranian regime has blamed Israel as much as the United States. So too has Hassan Nasrallah who leads Hezbollah, Iran’s collaborator in Lebanon, Syria, and Yemen. It is noteworthy that a former head of the Islamic Revolutionary Guard Corps, Mohsen Rezaee, who previously had asserted that Israel had provided the United States with information regarding Soleimani’s whereabouts, stated at a memorial for the Iranian general that Iran could avenge his death by targeting Tel Aviv and Haifa. Moreover, Brig. Gen. Esmail Ghaani, Soleimani’s former deputy and now his successor, has a history of anti-Israel pronouncements. And the Tehran Times, which slavishly follows the government line, headlined a report with “Pompeo indirectly confirms Israel’s involvement in assassinating General Soleimani.”

Despite the harsh rhetoric emanating from both Washington and Tehran—Ghaani has promised “bodies of Americans” across the region while President Donald Trump has said any attack on Americans would lead to the destruction of fifty-two Iranian sites—it is not at all clear that either side is looking for a conflict. Tehran certainly would avoid direct operations against American forces; it has long, and successfully, operated by indirection. And Trump clearly is reluctant to drag the United States into another Middle East imbroglio.

War between Israel and Hezbollah, or even Iran itself, is quite another matter. In response to unequivocal threats from both Hezbollah and Tehran, Prime Minister Benjamin Netanyahu has for the first time officially revealed that Israel is a nuclear power. The country’s war cabinet has been meeting regularly, and its forces are on a high level of alert.

Moreover, Netanyahu’s calculus is different from that of his usual soulmate, the American president. Trump has every incentive to avoid a conflict, which could jeopardize his re-election prospects given the war weariness of the American public. On the other hand, Netanyahu, fighting for his political life and seeking to win immunity from prosecution for accepting bribes and committing other crimes, might actually relish prolonged tensions with Tehran, even if they led to some escalation in the long-standing, low-level hostilities between the two states. Having campaigned throughout the past decade on the basis of his ability to lead the nation in a conflict, Netanyahu may hope both to convince the Israeli Knesset to grant him immunity and to convince enough voters in the elections set for March that only he can lead them through what clearly is the most serious Middle Eastern crisis since the Gulf War.

It is noteworthy that during the lead-in to the 1991 Gulf War, Washington dispatched Deputy Secretary of State Lawrence Eagleburger to Jerusalem to plead with then-Prime Minister Yitzhak Shamir not to retaliate against Saddam if the Iraqis fired missiles at the Jewish state. Shamir acceded to Eagleburger’s plea, in part because Washington sent Patriot missiles to help defend Israel against Iraqi Scud missiles (they proved to be less than effective), but more importantly because Shamir did not want to interrupt the massive flow of immigrants to Israel from the Soviet Union, which would certainly have been the case if Israel was at war.

Netanyahu faces no such constraints; the influx of Jews from the former Soviet states peaked years ago. He may not seek war outright, but, given his obsession with remaining in power come what may, neither will he actively avoid it. And in the event that war between Israel and Iran does indeed materialize, Trump may find that he has no alternative but to intervene on Israel’s behalf, thereby plunging America into the very Middle Eastern conflict he so desperately has sought to avoid.