America Proved Its Resoluteness in Afghanistan 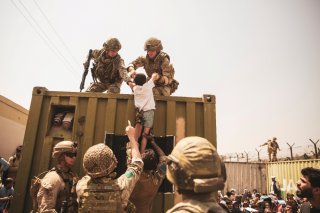 For those American troops who question whether all the sacrifice in Afghanistan of the last twenty years was worth it, we would offer a simple message: Yes. Not only because the American homeland stayed generally safe over that time period. Not only because of the noble generosity and patriotism of that service. But for crucial strategic reasons as well.

We disagreed strongly with President Joe Biden’s decision to end the U.S. and NATO military mission in Afghanistan this year. Many gains achieved by and for the Afghan people these last two decades are now in acute jeopardy, and the U.S. counterterrorism effort in South Asia has now lost its main platform. Moreover, “over the horizon counterterrorism” is close to an oxymoron. With the U.S. military burden in Afghanistan already below 5,000 troops when Biden took office—an eminently sustainable level—this was an unnecessary retrenchment.

But our troops have shown their mettle, and that of the country. President Biden’s decision has weakened our credibility, but two decades of courageous service in Afghanistan and beyond by our troops, diplomats, aid workers, and others have demonstrated an American resoluteness that speaks volumes.

Because of this record, there are good reasons to believe that Taliban leaders are well aware of the importance of not provoking the United States. They let us conduct a two-week evacuation effort even after they had successfully seized the country’s capital—and in fact even helped us with the process, albeit grudgingly and imperfectly. They chose not to object, or interfere with us in any way when President Biden struck ISIS-K targets on Afghan soil after the terrible bombing in late August in Kabul. They are apparently not threatening those Americans who are still in Afghanistan, and in fact, are letting them continue to leave even now that there are no longer any U.S. military boots on the ground in-country. They understand the importance of not goading or angering America.

Of course, no one should take the Taliban at their word. In our view, last year’s February 29 accord between the Trump administration and the Taliban required the latter to break all ties with al Qaeda, something that was not done. And the question remains, will Afghanistan become a cauldron for a witches’ brew of jihadist terror groups inevitably seeking to accumulate there? Meanwhile, the new government has promised peace, and amnesty, to other Afghans even as it has at times retaliated brutally against erstwhile enemies since seizing power. And of course, it has already made a mockery of its promise to build an inclusive government for the good of the Afghan people.

But they are survivors, and they have proven on the battlefield these last twenty years that they know how to make smart calculations about how to take and hold power. Those terrible mid-August images of the Taliban rejoicing in the presidential palace and other key landmarks in Kabul, after they seized the city, are seared into our minds as a symbol of military defeat. They also suggest that the Taliban find the trappings of government power and prestige to be appealing.  We know where those big buildings are, and we can target them with lethal efficiency if need be—and the Taliban know it.  They also know we are prepared to fight, and fight hard, to defend ourselves.

None of this is to suggest that Taliban rule, version 2021, will be what we, or most of the Afghan people, really wanted, especially Afghan women, girls, and minorities. Nor is it to dismiss the risks that President Biden’s credibility may be damaged in other theaters and on other issues, from Korea to the Baltics to Taiwan. His administration will now need to do global damage control.

In a broader perspective, however, this nation has shown its toughness for two decades—thanks primarily to those in uniform who have served. When Osama bin Laden told American journalist John Miller back in 1998 that America was in his eyes a paper tiger, he could cite our retreats from Beirut in 1983 and Mogadishu in 1993, our non-response to the first attempt on the World Trade Center in 1994, our cruise-missile-only response to the Africa embassy attacks of 1998. In those earlier times, we did not even seem sure to fight in our own direct defense.

Few could make that same calculation about the United States today, even if Biden has weakened our collective credibility somewhat with his departure decision. By fighting for twenty years, even in a difficult cause with an uncertain path to anything resembling true victory, the country has shown its resoluteness. Whatever the specific military verdict on Afghanistan, this broader strategic benefit of the mission there is likely to continue to help deter the Taliban—and thus to protect the United States—for years to come. That is an enormous contribution by all who served for which they should be proud and for which we should all be deeply grateful.