Is America Ready for China’s Belt and Road Challenge? 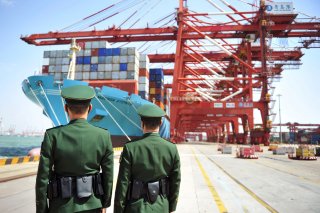 Since early 2020, there have been rumors that the Belt and Road Initiative (BRI), Chinese President Xi Jinping’s prized economic strategy, was in trouble as a result of the coronavirus and rising global opposition. This, however, is turning out to be mostly wishful thinking. It would be more accurate to say that the BRI’s scope is shifting from its traditional strategy of mainly infrastructure-driven development toward sleeker, more modern efforts.

The coronavirus has been a key driver of this transformation. While it’s true that the global pandemic has significantly impacted China’s outreach (and its reputation), it has also provided Beijing with the perfect opportunity to alter the parameters of the BRI and reorient toward more relevant efforts.

Throughout 2020, a number of BRI projects were either halted or scrapped, and many countries sought to defer their loan repayments to Beijing. Even so, China used the opportunity to pivot to public health and digital services.

Take China’s “Health Silk Road.” The idea of a global public health effort spearheaded by China isn’t a new one; it was first introduced in 2017 when Xi Jinping signed a pact with the World Health Organization (WHO) committing to make health a major focus of the BRI. But the idea was catapulted into prominence in 2020 when, under the aegis of the BRI, Chinese companies publicly donated personal protective equipment around the world in an attempt to counter the prevailing global narrative of its negative role in the spread of the coronavirus. Facets of the Health Silk Road include providing countries with medical supplies and consultations, as well as monetary aid to the WHO so it can assist developing countries in building stronger public health systems.

Then, there is technology: the so-called “Digital Silk Road.” Although the pandemic caused some setbacks in China’s efforts to become the world’s leading provider of 5G technology (notably souring the UK on cooperation with Chinese telecom giant Huawei), it has also afforded unexpected opportunities as well. Throughout 2020, Chinese tech firms introduced numerous 5G-driven medical services and helped to build 5G networks both at home and abroad to connect health care workers and patients with medical experts. And much more is in store in this regard; in May of 2020, the National People’s Congress approved a six-year spending plan with 5G as its foundation. Huawei, China’s controversial telecom giant, has also laid a six-thousand-kilometer fiber-optic cable across the Atlantic between Brazil and Cameroon, while the spread of digital payment platforms like WeChat Pay and Alipay has helped to further internationalize the yuan.

The so-called “Green Silk Road” has received comparatively less attention, but it represents an effort that almost certainly will grow in importance in the future. The pandemic has given Beijing the opportunity to nix not only unviable projects but unpopular and economically irrelevant ones (like dams and dirty coal plants) as well. Indeed, reports have noted that the proportion of dirty to green projects underwritten by the PRC has begun to decline. Late last year, for instance, China’s Ministry of Ecology released a framework for classifying BRI projects depending on their environmental impact. According to one analysis, “[t]he system will help curb pollution, climate change and biodiversity loss caused by the mega infrastructure projects associated with the BRI.” Not only that but in 2020, 57 percent of China’s investments in energy infrastructure focused on renewables.

Not everything has changed, however. The BRI remains, at its core, an infrastructure-driven development model. Xi’s plans for the future still rely on physical economic corridors throughout Asia and Europe, and since its projects tend to use Chinese firms, they create important jobs for the workforce. However, the BRI has always been ill-defined, which means that it can adapt to new domains to remain relevant, which is something that is now happening in the health, technology and green energy arenas.

The end result is notable. As the foregoing makes clear, the BRI remains salient, and now has new coherence and direction. The Biden administration is going to need a coordinated, multifaceted plan to counter the changing shape of the BRI if it means to truly engage in great-power competition with Beijing.

Gracia Watson is a researcher at the American Foreign Policy Council in Washington, DC.