America Sanctioned the Saudis for Khashoggi's Death. Washington Can Afford to Do More. 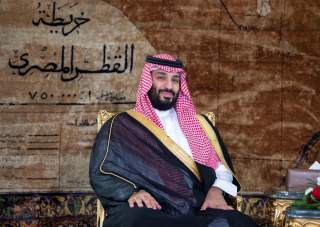 The Treasury Department announced on November 15 that sanctions were applied against seventeen individuals from Saudi Arabia due to their involvement in the murder of journalist Jamal Khashoggi. Khashoggi was killed last month at the Saudi consulate in Turkey. The Saudi government attempted to cover up his death, insisting it was simply a fistfight gone horribly awry. But the Central Intelligence Agency has concluded that Saudi crown prince Mohammed bin Salman was in on the whole thing.

These sanctions came after Veterans Day weekend confirmation that the Trump administration will no longer provide refueling for the Saudi campaign in Yemen, one of the most significant aspects of U.S. logistical support for Saudi Arabia’s brutal war there. Khashoggi’s death has put the international spotlight on Saudi and U.S. actions in the Yemeni civil war.

But President Donald Trump has made clear that these actions are a mere slap on the wrist for the Saudi kingdom, as he obsesses over Iran and clings to stale ideas about America’s relationship to the Saudis and Washington’s role in the Middle East.

In a rambling statement released last week, he emphasized America’s “essential” ties with Saudi Arabia as an ally in the fight against Iran and the war on terror: “They have been a great ally in our very important fight against Iran. The United States intends to remain a steadfast partner of Saudi Arabia…It is our paramount goal to fully eliminate the threat of terrorism throughout the world!”

President Trump acknowledged the sanctions placed on the seventeen individuals involved in Khashoggi’s murder, suggesting this was punishment enough. Sanctions used to be an act of war; now, they are a political stunt. Sanctions are only useful if they can successfully force a regime to change its behavior, and they have a poor track record of that. These sanctions are a public relations maneuver.

The decision to end refueling is more substantive, and welcome, but it doesn’t go far enough. It isn’t simply that the United States provided the fuel that allows the Saudis to kill innocent civilians, but American brought weapons as well. Infamously, the bomb that hit a school bus back in August, killing forty children, eleven adults, and wounding seventy-nine others was purchased from America, made by Lockheed Martin.

In fact, one reason President Trump and his surrogates have refused to go hard on the Saudis because of U.S. arms sales. Trump wrongly buys into a neo-mercantilist theory that arms deals are an economic boon for America. But war profiteering does not enhance prosperity and well-being. Scarce resources spent on weapons of war inevitably means they are diverted from other, more productive activity.

The truth is, Americans don’t know the full extent of U.S. involvement in Yemen. Yahoo News reported two weeks ago on the discovery of a classified program, Operation Yukon Discovery, which is supporting the Saudi war in Yemen in unknown ways. Efforts in the House to stop all U.S. assistance in Yemen was killed in committee by Speaker Paul Ryan, though the Senate was successful last week in clearing a procedural hurdle that brings the matter up for debate and a vote. Secretary of Defense Mattis and Secretary of State Pompeo appeared before the Senate prior to this action to defend the U.S.’s role in Yemen.

The seemingly undying support from America for Saudi Arabia is based on a long-held idea that they are essential for U.S. energy and security interests in the region. This current is particularly strong in the Trump administration at the moment because of their obsession with antagonizing Iran, since Saudi Arabia and Iran are regional rivals. The Yemeni war is part of a decades-long proxy conflict between the two, where the Saudis believe Iran is funding the Houthi rebels.

Maybe it’s true that Saudi Arabia was an essential ally to the United States in the past, but it isn’t true any longer. As the Cato Institute’s Emma Ashford has written: “U.S. and Saudi interests in the Middle East are diverging...Saudi foreign policy is increasingly a destabilizing force in the region. Minimizing our ties to Saudi Arabia certainly won’t worsen our regional interests. It could even improve things.”

It has long been argued that ensuring the free flow of oil from the Saudi kingdom and other Persian Gulf countries is a matter worth American military intervention. But, today, America imports very little oil from the Middle East. We get more oil from Canada than Saudi Arabia. If, for some reason, the oil stopped tomorrow there could be some negative short-term consequences, but markets, entrepreneurs, and consumers would adjust.

Khashoggi’s death generated a justified outrage, but sanctions and the end of the refueling policy are a cosmetic reproach of Saudi Arabia—as the Trump administration has made clear. They’re meant to placate critics while continuing the status-quo, or at least a status-quo lite. If Americans wish for a saner policy with regards to the Saudis, they should push for a less hostile approach to Iran, and recognize the United States doesn’t have to take sides in Saudi Arabia’s fight.