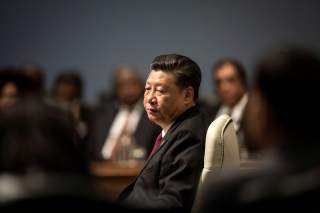 China’s escape from the Cultural Revolution and adoption of markets were expected to yield a double benefit for the West. Chinese economic growth would both fuel global development and moderate Beijing’s political objectives. Over time the People’s Republic of China would become deeply and firmly integrated in the international order, and economic liberty would encourage political reform.

But that isn’t the result we see today from the PRC’s transformation. Xi’s government appears headed for personal dictatorship and totalitarian control. Presidential term limits are gone, Western values are vilified, censorship is intensified, surveillance is expanded, political education is revived and controls over private companies are multiplied. Xinjiang suffers under nightmarish repression. A system of “social credit” brings to mind 1984 as Beijing will be empowered to target any of 1.3 billion people for behavior deemed threatening or simply inappropriate. For instance, someone who even hints that they desire democracy or liberty won’t be able to purchase a train ticket.

No longer is the PRC satisfied with oppressing its own people. The central government is extending its control over Hong Kong, a supposedly autonomous Special Administrative Region. Xi’s government also is intensifying pressure on Taiwan, with the objective of swallowing the effectively independent—though largely unrecognized—state.

Perhaps even more problematic for the United States, Beijing is using its economic clout to conscript American firms as part of the PRC’s political campaigns. China long traded access to its market for access to Western technology. But President Xi Jinping has added a new dimension, threatening to penalize foreign firms which do not help isolate Taiwan by treating the island nation as if it was part of China.

Beijing long has insisted on a “One China” policy when it comes to diplomatic recognition. Chiang Kai-shek’s Nationalist government, defeated by the Chinese Communist Party on the mainland, moved to the island of Taiwan, from which Kai-shek’s Republic of China claimed to be the rightful government for all of China. Few believed this fiction, but Washington encouraged countries to try to quarantine the new communist regime.

The PRC picked up additional recognitions at a modest rate, which accelerated with Africa’s decolonization. After Washington allowed the PRC to take over the “China” seat at the UN in October 1971, many Western governments shifted their recognition to Beijing. The United States finally did so in 1979. Furthermore, in recent years an ever-wealthier PRC competed with Taiwan in checkbook diplomacy and won over many of the small nations which once favored the ROC. The Dominican Republic was the latest defector, switching its recognition to Beijing in May. Only nineteen countries still recognize Taiwan, and that number is likely to continue to dwindle.

However, commerce was largely unaffected. Although the PRC surpassed its competitor economically, the island remains a significant economic player. Trade and investment flow both ways. Even, notably, to and from China, despite Taiwanese fears of being effectively absorbed by the PRC.

But now Beijing is demanding that Western firms essentially recognize only China when it comes to business. Although Xi’s government as has not yet sought to interfere with trade and investment per se, it is demanding that service companies treat Taiwan as part of China. This would further intensify pressure on the only ethnic Chinese territory which actually is free and democratic.

JW Marriott suffered the PRC’s ire when the firm sent out a customer survey which treated Taiwan (as well as Hong Kong, Macau, and Tibet) as separate companies. The company’s Chinese language websites were temporarily closed while firm management groveled and apologized. Said CEO Arne Sorenson: “Marriott International respects and supports the sovereignty and territorial integrity of China.” Of course.

This set off a corporate rush to scrub websites to avoid Chinese criticism. That only whet Beijing’s appetite. Xi’s government then demanded that forty-four global airlines treat Taiwan as part of “China,” threatening unspecified sanctions if they did not. Most folded. Last week U.S. hold-outs American, Delta, and United also complied, sort of. They dropped any national designation for Taipei. However, Beijing insisted that the half-step still fell short. What happens next is anyone’s guess.

As this controversy developed, the Trump administration denounced China’s demand as “Orwellian nonsense,” but Beijing refused to discuss the issue with Washington. Although it is tempting for U.S. officials to stay out of an issue that looks purely private, America is necessarily affected by the PRC’s use of economic wealth generated through business with America to force political gains. The airline websites are likely just the start of Beijing’s economic extortion. The Trump administration should consider how to respond to similar future demands.

It is not enough for Washington to offer rhetorical support for U.S. firms. That won’t make up for fines or lost revenue. Washington should consider carefully calibrated retaliation. The best targets would be Chinese state enterprises or private firms with significant state support. America should explain that the issue is not Taiwan’s status, but attempts to turn American firms into Chinese geopolitical weapons.

Still, no one would benefit from intensifying today’s burgeoning trade war. Although the president’s rhetoric about trade deficits is misguided—Americans benefit from buying inexpensive products abroad—China does gain from significant structural abuses. Those should be the focus of the administration’s efforts. The administration should add to its negotiation list the PRC’s efforts to dragoon Western companies into political campaigns. To better achieve this objective, Washington should approach Asian and European governments in an attempt to forge a united negotiating front.

Those who are currently asking “who lost China” are repeating the same mistake of 1949. Neither Nationalist nor Communist China was America’s to lose. However, Xi’s government is moving in a significantly negative direction at ever greater speed.

On its own, foreign corporate references to Taiwan are a minor issue. Allowing Beijing to use its economic power for political gain is something much more, however. No longer can the West simply assume the inevitable benefits of Chinese growth. Nations committed to a liberal, capitalist, and democratic order should marshal their resources in response.