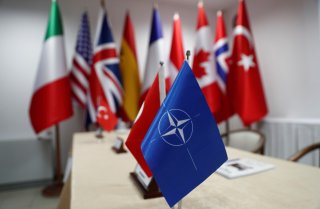 WHAT SHOULD America’s foreign policy be the day after Donald Trump? Once again, the hunt is on for a new organizing concept for statecraft. And once again, a hawkish brand of liberal internationalism reasserts itself, proposing an “Open World.” Its defects should now be familiar, even if its purveyors insist their version of it is fresh. Yet a foreign policy organized around this idea, of U.S.-led democracies battling dictatorships, will create conditions for a world at war.

In the U.S. marketplace of ideas, a renewed “Cold War liberalism” is on offer. It takes dead aim at authoritarianism everywhere. Its organizing principle is that “regime type,” at home and abroad, should determine how America defines its interests. America’s overriding security problem, it suggests, is the absence or thwarting of democracy. The antidote it offers is the advancement of democracy.

There is every indication that this evangelist outlook will inform the doctrine, if not always the practice, of any post-Trump foreign policy under a Democratic presidency. For President Joe Biden, America must “lead” again. “The triumph of democracy and liberalism over fascism and autocracy created the free world,” Biden stated, adding that “this contest does not just define our past. It will define our future, as well.” Biden’s policy platform promises a “Global Summit for Democracy” to bring together the world’s free states and to bring forth “civil society organizations” to stand on the frontline to defend democracy. He has vowed to support Kremlin opponents within Russia. His secretary of state, Antony Blinken, in 2019 proposed a “league of democracies.” The Center for American Progress, a hawkish liberal think tank closely tied to the Democratic Party, calls for “defending democracy and pushing back on authoritarian competitors as a vital national interest.” While it calls for “humility” and disavows “discredited notions of regime change,” it states the world will be safer and more prosperous with “more democracies,” and summons the United States to bolster democratic allies against authoritarian adversaries with arms sales, training, and technology, as well as systematically pressuring countries to uphold human rights and international law. A humble program of ideological competition and democratic expansion, then.

Likewise, in both scholarly and popular literature are calls for a renewed contest between democracy and authoritarianism. Some of the liveliest Atlanticist minds—Tim Snyder, Alexander Vindman, Matthew Kroenig, and Robert Kagan—call on America to lead a league of democracies against the tyranny of an aggregated enemy: authoritarianism, or even “illiberalism.” Any American retrenchment, they warn, would lead to perilous advances of authoritarianism across the globe. They may claim not to be asserting American dominance from an earlier era. But even in a more polycentric world, they insist on American preeminence and attribute failures not to American exceptionalism, but to departures from it, calling for a renewed focus on the internal character of foreign regimes.

THE MOST developed version of this argument is a sweeping new vision for U.S. statecraft by Rebecca Lissner and Mira Rapp-Hooper, who argue that Washington should pursue a transformative policy to create an “Open World.” This design would reimagine, rather than restore, the lamented “liberal international order.” This doctrine would reorganize America’s efforts around opposition to authoritarian great powers, making the globe more “accessible.” As the United States can only remain secure and prosperous within a free and open international system, it should collaborate with its allies and partners to “modernize international institutions,” as the international order is “vital in confronting such existential threats as climate change and global pandemics.”

They acknowledge that while the United States remains powerful on most measures, its relative power has declined compared to near-peer rivals like China. Faced with these drawbacks, the authors caution against hubris, chasing military primacy, and spreading universal liberalism. Likewise, neither nostalgia for the “old liberal order nor an isolationist retrenchment” will do. There must instead be an “affirmative vision for an international order that allies and partners can embrace.” This vision, they argue, can secure America without a future of militarized crises and imperial overstretch. But constraints observed quickly fall away. Failure to assume the global “mantle of leadership” because of “introverted nationalism” or misplaced “nostalgia” will result in chaos.

This “open world” grand strategy has many parts, but three ambitions stand out. One, the United States, while recognizing China’s economic growth and the shift to greater multipolarity, should still commit to prevent and resist “any attempts to establish spheres of dominance—whether territorial or technological—that are impermeable to outside commercial, military, or diplomatic access.” Washington must ensure the global flow of trade and commerce, open-sea routes, as well as deter China from forming or dominating what it considers its own backyard. Two, the United States should oppose rising authoritarian great powers. Forming alliances with democracies, America should “lead the charge toward an open and pluralistic information environment that encourages democracy” as that would not only enhance economic power but also protect the United States from cyberattacks and malign influence. And three, America should commit to “expanding existing alliances in Asia and Europe,” to form a joint front against cyber aggression and interference.

Unfortunately, while the aim is noble, the policy approach is flawed. To be sure, there are some ideas here to agree with, from rebooting institutions to dealing with climate change, the diffusion of technology, monopoly capitalism, and the fraying social contract. And balancing intelligently against China’s bid for hegemony in Asia is surely necessary. But it also bears the flaws of what it is: a chastened, more polite version of the neoconservative-liberal interventionist consensus.

To begin with, it conflates an “open” world with the process of “opening” it. While in theory, an achieved world of U.S.-friendly democracies would be a more peaceful world, history suggests the process of security competition and revolution leading to that point would be unstable and war-prone. Democracies may not fight each other often. But this ignores the double finding of scholarship, that democracies are at least as capable of belligerence when pitted against dictatorships, especially when those democracies are in transition. This is all the truer for a democratic superpower, especially when it believes it cannot tolerate non-democracies, and especially when it gives itself permission to use force frequently because it supposes itself to be a champion of peace. This has always been a difficulty with Wilsonian ambition. All too easily, the aspiration for a world safe for democracies slips into trying to make the world democratic.

The authors’ program is intended to be restrained and carefully calibrated. But the “battlegrounds” where America “must compete” include Africa. And even with a reduced footprint in the Middle East, America should remain “deeply engaged” there, and the authors regard Trump’s attempted withdrawal from Syria as “precipitous” and praise the Iran nuclear agreement. So beyond Asia and Europe, the first and second priorities, the country in this schema will be very busy abroad. This may be a tempered primacy compared to the extravagance of other eras, but it is still primacy, which generally struggles to hold back.

Finding security interests implicated just about everywhere, this worldview would lead to further imperial overstretch and loss of blood and treasure in pursuit of needless ideological missions in strategic backwaters. What would be intended as rallying calls to mobilize would come across as hubristic self-righteousness and dangerous escalation. Whatever the intention, adversaries would rationally fear that their own regimes were threatened, and act accordingly. Treating these disparate enemies, with different ambitions, as an aggregate force—“authoritarianism”—will be self-fulfilling. What would be intended as displays of resolve would incentivize these disparate adversaries to look past historic frictions and band together. China and Russia are increasingly doing so.

Openness under U.S. “leadership,” the mantra of these visions, sounds attractive. But on closer inspection, it means penetration only on the hegemon’s selective terms. One go-to instrument of American power favored by the authors is economic sanctions—in other words, economic blockade or even strangulation, at times cutting off whole countries from trade and commerce. This is shutting down and closure, not opening up. And presumably, openness still precludes other powers from forming alliances or a military presence in America’s backyard.

Claims to world “leadership” are inescapably coercive and aggrandizing. It is about power hierarchies, and who is in charge. Rapp-Hooper and Lissner frame this more in counter-hegemonic than hegemonic terms—the United States can’t dominate rivals as it once did, they rightly note, but should prevent authoritarian powers dominating beyond their borders. In practice, this is effectively an argument for global containment of any illiberal rising power from Europe to the Middle East to Asia, making hegemony versus counter-hegemony a distinction without a difference. “Leading the charge” to prevent Russia carving out a sphere in its near abroad, or China dominating the First Island Chain, effectively means a dominant U.S. presence. So, despite the protective clauses in the argument, it is objectively a call for renewed American primacy after all. Evidently, those eminent primacists who endorsed the book—Jim Mattis, Avril Haines, Michèle Flournoy, and John Ikenberry—find little to disturb their cosmos.