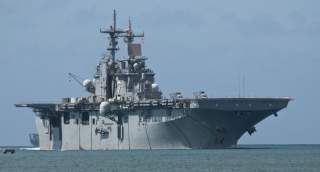 It has been nearly eight years since the U.S. Navy, Marine Corps and Coast Guard announced their first tri-service vision, A Cooperative Strategy for 21st Century Seapower (CS21) on October 17, 2007. On Friday March 13, the current service chiefs, Admiral Greenert, General Dunford and Admiral Zukunft, revealed an updated version A Cooperative Strategy for 21st Century Seapower: Forward, Engaged, Ready (CS21-2015) at the Center for Strategic and International Studies (CSIS) in Washington, DC. As I write, analysts and maritime enthusiasts are already slinging arrows and darts at the document. The criticisms are predictable: CS21-2015 does not conform to one of the classic war college definitions of strategy; it does not pay sufficient attention to the latest headlines, some region or warfighting specialty is inadequately emphasized by the strategy, and on and on and on.

A few analysts, however, have offered qualified praise. My colleague Professor Jim Holmes, for example, has awarded a passing grade to the 2015 document, a fine thing too because he has been notably critical of Navy strategy for some time. Longtime strategist Frank Hoffman judges it “a ‘better’ maritime strategy,” at least in part because it has “a solid diagnosis, a conceptual ‘way’ to resolve the inherent problem identified by the diagnosis and a set of coherent implementing actions that logically support the basic guiding policy.”

Lots of folks will continue to critique the specific strengths and weaknesses of CS21-2015, so I will leave the nitpicking to others. I will focus instead on how well the 2015 version of A Cooperative Strategy for 21st Century Seapower performs two critical functions:

(1) How well does CS21-2015 help the Service chiefs meet their Title X responsibilities to “man, train and equip” their organizations? And

(2) Does CS21-2015 meet the nation’s security needs as articulated in the Obama administration’s 2015 National Security Strategy?

To preview the answers to my own questions, the 2015 tri-service strategy is paradoxical; it may better serves U.S. national needs than help the Sea Services meet their own self-identified, external and internal challenges.

According to many analysts, all three Sea Services are in trouble. The Navy is operating, and has operated for a long-time, at a barely sustainable operational tempo. Ships and more important sailors and officers are at sea longer than any previous period of maritime peace, to the point where it is increasingly difficult and expensive to maintain equipment and sustain morale.

Worse, for the first time in a generation, a serious naval competitor has appeared; whatever its shortcomings, China’s PLAN possess a range of capabilities that call into question the USN’s longstanding dominance in East Asia, the acknowledged center of gravity for the global economy. And yet the numbers and types of platforms available to the Sea Services—ranging from ships to manned aircraft to unmanned systems of all sorts—are falling, while fiscal constraints make it hard to sustain the existing force, much less recapitalize, modernize and innovate in the face of a growing threat.

The Marine Corps has spent most of the last decade far from their maritime, amphibious, and expeditionary origin—thousands of Marines have been fighting terrorists and countering insurgency in the deserts and cities of Iraq and Afghanistan. The costs in human and material terms were, and are, enormous. The implications of conducting extended land operations for the Marine’s self-identity as the nation’s 911 emergency force are incalculable. And again, perhaps even more so than the Navy, equipment and weapons are aging and worn, but recapitalization, modernization, and innovation are problematic.

In the post-Cold War security environment, the USCG has stretched itself thin trying to push America’s defensive perimeter (against terrorists, pirates, criminals and contraband) to the farthest ports and seas from the Horn of Africa to Singapore. In the meantime, a new operating area, the Arctic, has captured the attention of national security analysts as the melting icecap has allowed shippers, cruise lines, energy corporations, and mining firms—not to mention other Arctic states like Russia and Arctic state-wannabes like China—to begin exploiting the regional transportation routes and resources.

To remedy these troubles, the three services needed to articulate a convincing rationale to the American people and, especially the U.S. Congress, to sustain their people and critical weapons and support systems. But from my perspective, three of the central ideas in CS21, although entirely consistent with long-standing traditions of the Sea Services, contain logical contradictions given the emerging global security environment and, even more significant, the political environment at home. The following paragraphs will examine three “big ideas” underlying A Cooperative Strategy for the 21st Century: Forward, Engaged, Ready.

Since at least the writing of Captain Alfred Thayer Mahan, navies across the globe have equated seapower with economic prosperity both for individual nations and for the world as a whole. CS21-2015, like its 2007 predecessor, places great emphasis on the roles of the Navy, Marines, and Coast Guard in protecting sea lines of communication, strategic chokepoints, and maritime critical infrastructure. Contradictions assume two forms.

First, the United States spends far more on national security (including most especially naval forces) than its allies and adversaries. How will continuing this trend affect U.S. economic health relative to other countries and/or America’s standing in the global economy? This is essentially a modern variant of the traditional burden sharing problem. When the United States enjoyed economic dominance in the early post-World War II years it might have made sense to bear the lion’s share of the burden for securing the seas. Now that the United States is simply one economy among several other peer or near-peer economies it may not make sense, especially during times of budgetary stress.

Second, as many strategists and scholars have pointed out, America’s global power—in economic, political and military terms—begins first and foremost with a healthy, robust and growing American economy. Nothing, for example, can protect the nation’s economic future as well as investing in infrastructure and education at home; protecting the sea lanes in the Indian Ocean or a chokepoint like the Strait of Hormuz ultimately benefits the United States but in relative terms, other nations—including our most likely competitor China—may benefit more. Why should the United States agree to subsidize international commerce when its own fiscal health and long-term economic competitiveness are in question?

Of course, the tradeoffs between investing in seapower and investing in the nation’s domestic needs are not always direct and clear. But, in the long run the answer to this question, especially relative to the roles of the Sea Services in supporting U.S. grand strategy, requires greater thought and, in the end, clear political consensus.

The animating idea of CS21-20015 as well as most naval strategy documents dating back to at least to the 1970s is Forward Presence. Forward presence as an idea has many definitions and a fair amount of nuance but the baseline concept is that “being there matters.” The PowerPoint slide summarizing CS21-2015 emphasizes and summarizes the push forward: “Forward presence of 120 ships by 2020, up from 97 in 2014; increase ship and aircraft presence in the Indo-Asia-Pacific to as much as 60 percent by 2020; additional attack sub in Guam, upping the port’s number to 4; deploying most advanced, capable platforms to Indo-Asia-Pacific region: LCS, BMD capable ships, F-35C Lightning II, MQ-4C Triton, MV-22 Osprey Squadrons; increasing presence in Middle East from 30 ships today to 40 in 2020; and four BMD-capable destroyers based in Spain by end of 2015.”

The contradiction lies in the juxtaposition of Forward Presence with what CS21-2015 and a host of similar documents and programs identifies as the greatest military challenge facing maritime forces in the 21st century: anti-access/area denial (A2/AD) strategies and capabilities.

At their core, A2/AD strategies are designed to push maritime adversaries away from the coast, littorals and potentially further depending on national objectives and capabilities. As CS21-2015 readily acknowledges, China has developed the most comprehensive A2/AD approach even though, as China specialists remind us,

A2/AD terminology is not a Chinese concept but rather a Western construct. Other countries, notably Russia and Iran, also possess or are acquiring A2/AD capabilities and have clearly indicated their intent to use them, including against the United States if necessary. Furthermore, several of the specific weapons systems that make A2/AD possible—such as cruise missiles, anti-ship ballistic missiles, unmanned vehicles, and advanced ISR and targeting systems—are proliferating to a much wider set of maritime countries than the so-called rogue states or technologically advanced great powers.

What this amounts to, if we step back from the details, is doubling down on an old idea despite vast changes in technological capabilities in recent years. Why, if other nations have acquired the means and the concepts to hold American forces at risk not only in their littorals but increasingly, as in the case with China, several thousand miles from their coasts, do the Sea Services propose moving still more forces within range of A2/AD systems?