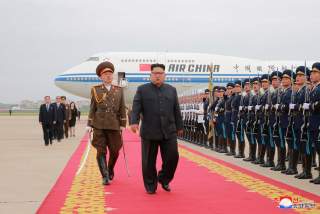 Now the hard work begins. The “ready, fire, aim” process that took us from unexpected White House announcement to meeting in Singapore was like no other. Perhaps previous summits were watched so avidly by the general public—Neville Chamberlain’s meeting with Hitler in 1938 perhaps. But even that fateful meeting was free of today’s relentless instant information and disinformation environment.

In a seemingly made-for-the-media process we saw preemptive public agreement by the United States, hurried scheduling, an aggrieved United States declaring cancellation, then rescue and rescheduling through a theatrically-delivered outsized North Korean letter. Loose rhetoric by a prominent self-appointed expert commentator alleged that Kim begged for summit rescheduling on his hands and knees. Merely getting Kim to the meeting became the central high drama, the apparent goal of the process. It was reality show theater.

But we did get the meeting, and it produced some results. President Trump and North Korean leader Kim Jong-un went from a personalized rhetorical blitzkrieg of dueling character descriptions including “dotard” and “little rocket man,” competing threats of “fire and fury” and “sea of fire,” and comparison of nuclear button sizes, to an emerging “sitzkrieg” of sorts. We’re in a better place than when we started.

Continuous polling recorded, and perhaps influenced, public opinion of three leaders: Trump, Moon and Kim. President Moon’s approval rating, always strong, is now in the high seventies. Kim Jong-un, the leader of the nation that sank the Korean corvette with forty-six sailors, shelled Yong Pyong Do, and employed a weapon of mass destruction in Malaysia, checked in at 80 percent—in South Korea(!)—after his Winter Olympics charm offensive and the summit with President Moon. Polling in North Korea, such as it is, can be assumed to indicate unanimous approval of Kim. Kim Jong-un’s star turn with the Winter Olympics and the Singapore Summit reversed public opinion and challenged the political foundations of the U.S.-ROK alliance structure. His charm campaign exploited his success with his missile and mass-destruction weapons programs.

Kim enjoyed high protocol treatment in Singapore, including public appearances touring the Lion City complete with selfies. Coming on the heels of summits in Beijing and a North-South meeting in Panmunjom, Kim gained the long-sought legitimacy and recognition as leader of a nuclear weapons state that eluded his father and grandfather. The capstone, the meeting with the U.S. president, reinforced his power at home and assured his legacy. And the price was right.

Kim gave nothing away, offering no more than North Korea has since the early 1990s. He demonstrated that he well understands the coercive value of a nuclear arsenal. Hopefully this includes the realization that his nuclear capability is much more valuable in its potential, but suicidal if used.

In return, the United States made unilateral declarations about Kim’s honorable character, and suspended all U.S.-South Korean military exercises—both major and routine—while negotiations continue in good faith. We introduced a teaser about withdrawing U.S. forces, and announced an end of the nuclear threat to the United States. We relaxed sanctions enforcement. Nothing was said about a nuclear threat to Japan. The survival-level threat that North Korea poses to South Korea from artillery and rocket forces in deeply buried and hardened shelters in the mountainous Kaesong Heights overlooking Seoul escaped notice, as did North Korea’s chemical weapons arsenal. That chemical capability was recently deployed and employed in Malaysia, demonstrating both skill and will. North Korea’s egregious human-rights record and ongoing serial abuses also escaped mention.

The overall drama of rising tensions followed by relief as the pain eased raised hopes and new, lofty expectations. Visions of “peace in our time” accompanied by peaceful coexistence if not reunification emerged. Kim is now declared an honorable man. One recalls an earlier president who looked into the eyes of an autocratic leader and saw his soul. The extraordinary approval granted the three leaders carries with it greatly expanded expectations for more results as we begin the hard work of describing, in detailed black-letter language and process, what must happen.

High expectations confront challenges. No arms-control regime has lasted forever. The Washington Naval Treaty of 1922 is an example. The Nuclear Non-Proliferation Treaty is, at the very least, under severe pressure. It may be the next arms-control regime to fade away. North Korea is not the only entrepreneurial proliferator, but they are persistent, proficient and global. It’s profitable. It helps keep the Kim Family Regime and their core supporters in the lifestyle they expect. Even totalitarian leaders have to pay attention to their constituents.

Nonaggression pacts have a consistent history. They lead to war, and we may be about to create something similar. See, for example, Molotov-Ribbentrop Pact of 1939. North Korea is well aware of this history. If we’re going to continue to deal with North Korea bilaterally instead of collectively with the help of many nations, we will in essence be creating another “pact.” It will be hard to convince North Korea that a nonaggression pledge from the United States is likely to be a more enduring security guarantee than their nuclear capability.

“Good faith” while we’re in negotiations implies a suspension of North Korea’s nuclear and missile development, production, proliferation and testing. That has good historical precedent. North Korea has restrained these tests while in negotiations before, but the initiative then resides in North Korea. Similarly, “Denuclearization of the Korean Peninsula” means removal of all nuclear-capable forces from the peninsula. South Korea has no such forces, so the effect on the U.S.-Republic of Korea alliance is clear.

“Good faith” while we’re in negotiations must also include an end to North Korean provocations. North Korea’s history of egregious, deadly provocations against South Korea the United States, and others over the last sixty years exposes the high hypocrisy in North Korea’s charge, with China’s endorsement, that our bilateral, defensive exercises in the face of the world’s fourth-largest armed force in attack positions just across the demilitarized zone are “provocative.” It’s like saying fire departments provoke fire. Lewis Carroll’s “Alice in Wonderland” perhaps anticipated North Korea’s cynical vocabulary:

When I use a word,” Humpty Dumpty said in rather a scornful tone, “it means just what I choose it to mean—neither more nor less.”

“The question is,” said Alice, “whether you can make words mean so many different things.”

“The question is,” said Humpty Dumpty, “which is to be master—that’s all.”

“Good faith” must also include immediate release of Americans captured while traveling in North Korea for any reasons. Even more “good faith” could be shown with a release of all political prisoners.

We do have one strong component to our national kit if we choose to deploy it. It’s one that had a major effect in the long existential campaign of the Cold War. It’s human rights. We used to be the champion and the leader.

Natan Sharansky, a man who knows a bit about this as an activist in this field and a former prisoner of the Soviet Union, placed an eloquent op-ed piece in the Washington Post on June 18, after the summit. He knows North Korea, and actively works this issue. He also knows—from deep personal experience—the effect we had on captive populations during the Soviet era. We didn’t win the Cold War through force of arms alone. We won it by being the “City on a Hill”—John Winthrop’s memorable guidance to the original settlers of Massachusetts Bay that was deployed so effectively by President Reagan. We won by reaching the soul of those “yearning to breathe free.”

We need to find our soul and do this again. While North Korea is hardly the only target, it is certainly a good place to start.

Image: North Korean leader Kim Jong Un is seen returning to North Korea after the summit with U.S. President Donald Trump, in this picture released on June 13, 2018 by North Korea's Korean Central News Agency. KCNA via REUTERS ATTENTION EDITORS - THIS PICTURE WAS PROVIDED BY A THIRD PARTY. REUTERS IS UNABLE TO INDEPENDENTLY VERIFY THE AUTHENTICITY, CONTENT, LOCATION OR DATE OF THIS IMAGE. NO THIRD PARTY SALES. NOT FOR USE BY REUTERS THIRD PARTY DISTRIBUTORS. SOUTH KOREA OUT. NO COMMERCIAL OR EDITORIAL SALES IN SOUTH KOREA.