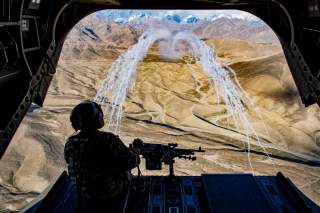 After nearly two decades of war in Afghanistan—the longest conflict in American history—the United States has finally begun to seriously consider potential exit strategies. Nevertheless, the White House’s recent announcement on the partial withdrawal of U.S. troops from the ongoing war in Afghanistan raises serious questions. At a recent Center for the National Interest panel discussion, three experts on the Afghan conflict weighed both the merits and repercussions of withdrawing from America’s longest war. The stability of the region and future of American interests in Central Asia depend in part on a well-planned extrication of U.S. forces from Afghanistan, but reaching that point remains a challenge.

The issue of withdrawal received extensive public attention in December when President Donald Trump announced that he planned to pull seven thousand troops, or about half of all U.S. forces, from Afghanistan. A large withdrawal of troops from Afghanistan would cause instability in the country and bloody civil war, according to Seth Jones, director of the Transnational Threats Initiative at the Center for Strategic and International Studies. Instead, Jones advocates retaining a U.S. Special Operations and intelligence presence in order to preclude the Taliban from regaining control of the country, while simultaneously pursuing a peace deal through negotiations. However, the possibility of a peace settlement is hindered by challenges that include what Jones described as a “two-level game” wherein both the Taliban and the Afghan government need to sit down at the same table along with the neighboring countries that support them. Further demonstrating the difficulties of a settlement in Afghanistan, Jones noted that “of the nearly two hundred insurgencies [since World War II], about three quarters end on the battlefield, about a quarter or so end with what you might call a draw, and a smaller percentage of those are a peace settlement.” President Ashraf Ghani would also likely face pushback to a peace deal with the Pashtun-dominated Taliban from different groups including the Uzbeks, Tajiks, Hazara, and the anti-Taliban Pashtun community. As seen even with successful peace deals in other conflicts, ongoing violence from breakaway factions would likely continue the bloodshed.

When the United States withdraws from Afghanistan it will inevitably reshuffle the balance of power in the region. Jones explained that the impact of a U.S. military withdrawal on the morale of the Afghan government would be “difficult to overestimate.” U.S. withdrawal would likely accelerate “a growing departure of civilians including educated personnel from the country” and almost certainly result in the departure of European forces, which rely heavily on the United States for their security and logistical needs. Finally, withdrawal would “heavily shift the balance of power in favor of the Taliban and its outside supporters,” primarily Pakistan, but also Iran and Russia. Building on their rural successes, the Taliban are gearing up to take control of some vulnerable cities. As this is occurring, even with the United States in Afghanistan, a withdrawal would render the collapse of the Kabul government inevitable. The rate at which this would happen, however, would depend on U.S. funding for the regime, the deterioration of Afghan security, and the actions of other actors such as the Islamic State. Finally, Jones argued, withdrawing U.S. forces would drive an increase in terrorist activity as Al Qaeda worked to support its Taliban allies.

Has America Achieved its Goals?

The counterargument is that it is in the best interest of the United States to withdraw from Afghanistan, which is something that is advocated by William Ruger, vice president for research and policy at the Charles Koch Institute. A veteran of the Afghan War, Ruger noted that the United States has achieved the goals it set out to achieve following 9/11: crippling Al Qaeda and severely punishing the Taliban for providing safe haven to terrorists. Although the mission metamorphosed over the years into a nation-building operation with an “idealistic agenda of expanding democracy and human rights,” American forces rather quickly accomplished the objectives that were of immediate national interest. Now that these initial battles have been won, Ruger contended that it is time to pursue a more realist approach since, “what realism dictates is that the U.S. withdraws in a careful fashion, but surely, from our longest war.”

Ruger also stated that Afghanistan holds minimal geostrategic value for the United States, rendering the social engineering and democracy-building missions underway there inessential, or even counterproductive, to U.S. national-security interests. He said that these operations only “distract us from more important priorities while undermining our prosperity and our civil liberties”—all while costing Americans $45 billion a year and thousands of lives lost since 2001. The sole vital interest the United States has in Afghanistan is to prevent it from again becoming a base for terrorist operations against the U.S. homeland, an end that requires neither boots on the ground nor a government friendly to Washington. The gap left by American troops could be filled in with support from special operations, reconnaissance, surveillance and other entities as needed without necessitating a permanent military presence.

Seth Jones countered that if Washington opts for this approach, then the issue of terrorism must be addressed given that the Taliban has shown time and again that it willingly works with and supports extremist groups. He maintained that if the Taliban returns to power, then the future spread of Islamic extremism is likely.

Are Conditions Worsening in Afghanistan?

Despite the continued U.S. military presence in Afghanistan, experts agree that the nation is facing some of its greatest setbacks in years. With the Taliban continuously gaining ground while the United States still has fourteen thousand troops stationed, William Ruger questions how much more should be done. Instead of withdrawing, does the United States instead need to expand its presence? Gil Barndollar, director of Middle East Studies at the Center for the National Interest and an Afghanistan veteran, agrees that the situation on the ground is worsening. With estimates that around 43 percent of Afghanistan is either under Taliban control or contested, the Taliban is enjoying its most extensive success since 2001. It is worth noting, however, that the vast majority of Taliban-controlled territory is rural. Thus, while the Taliban may contest as much as 65 percent of the country’s territory, they only have power over about 13 percent of the population. The grim situation is exacerbated by the abysmal state of the Afghan security forces, which continue to face mass casualties, low recruitment numbers, and high attrition rates, forcing the Afghan National army to replace a third of its forces every year. If the Afghan government were to foot the bill for its security forces without outside assistance, then it would use up their entire government budget. Barndollar emphasized that “there’s only one metric in Afghanistan that’s going up and that’s the number of bombs being dropped” with 2018 seeing the highest number of U.S. bombs since the Pentagon started keeping track in 2006.

If the Taliban were to seize power following a U.S. withdrawal, then the key issue is the spread of Islamic extremism and the Taliban’s willingness to support it. The three panelists agreed that the Taliban is a “parochial organization” whose primary goal is to control Afghanistan, without aspirations of international influence. In this regard, it is reasonable to assume the Taliban would cooperate with the United States since it has witnessed U.S. military might and does not wish to invite future American punitive expeditions by supporting terrorist groups. Of course, the Taliban is unable to control every actor within Afghanistan, but Ruger pointed out that this is not reason enough to keep fourteen thousand American troops on the ground.

If total withdrawal is taken off the table, then what should the U.S. strategy in Afghanistan be? If the goal is indeed to simply “prevent a collapse of the government” where victory is unlikely, keeping U.S. forces on the ground could prove to be rational. As Ruger points out, however, this is hardly an ideal strategy for a military, both in terms of cost-effectiveness or maintaining morale. Gil Barndollar advocates for what he calls a “Terminator Doctrine,” which would allow for American troops to return to Afghanistan in punitive expeditions should the Taliban once again rise to prominence and return to sheltering terrorist organizations. There is no obvious solution to Afghanistan’s ongoing power struggle and America’s role in ensuring the country’s stability. As the conflict approaches its eighteenth year and public opinion in support of U.S. involvement dwindles, the need for fresh thinking more in line with American and Afghan political realities is crucial.