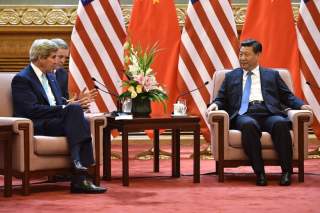 Much to the delight of China, recent weeks have witnessed a dramatic reorientation in the Asian strategic landscape. Demonstrating sophisticated statecraft, Chinese president Xi Jinping astutely utilized the recently concluded Asia Pacific Economic Cooperation (APEC) summit to emphasize Beijing’s centrality to regional prosperity and stability. Xi rekindled communication channels with estranged neighbors such as Japan and Vietnam, exploring various mechanisms to de-escalate territorial tensions in the Western Pacific. The summit featured icy bilateral meetings between the Chinese leader (with a poker face) and his Japanese and Vietnamese counterparts, namely Prime Minister Shinzo Abe and President Truong Tan Sang. The meetings came on the heels of weeks of preparation by special envoys to facilitate a formal meeting between their respective heads of states. There was also an informal talk between Xi and his Filipino counterpart, Benigno Aquino, who welcomed his first direct contact with the Chinese president.

There was a huge element of symbolism to the whole affair, and how the meetings were choreographed by Beijing and framed by the Chinese media. Xi, widely considered China’s first paramount leader in decades, acted like a benevolent Chinese emperor, receiving humbled emissaries seeking more stable ties with the Middle Kingdom. But the meeting with Abe was particularly awkward. Traditionally, Chinese leaders await their guests and warmly welcome them with smiles and handshakes. The Japanese leader, however, had to anxiously wait for his Chinese host at Beijing's Great Hall of the People, settling for no smiles and a cold handshake. It marked a huge departure from Abe’s very friendly, landmark meeting with Xi’s predecessor, Hu Jintao, back in 2006, when both sides fervently hailed a “turning point” in their bilateral relations. This time, Xi and Abe settled for expressing their mutual interest in preventing a military conflict, preserving high-stakes economic ties and reiterating their previous agreements, over the past four decades, on friendship and cooperation. Overall, however, the meeting was shrouded in strategic ambiguity: It isn’t clear whether there was any major compromise on bilateral differences, particularly on the Senkaku/Diaoyu islands dispute.

The APEC summit served as Xi’s coming-out party, presenting himself as a global leader. He boldly projected China as the most consequential economic player in the Asia-Pacific theater, proposing an ambitious Free Trade Area of the Asia-Pacific (FTAAP), which, if implemented, would render the U.S.-proposed Trans-Pacific Partnership (TPP) free-trade agreement as superfluous. Immediately after the APEC summit, Chinese premier Li Keqiang followed suit, launching a charm-offensive during the Association of Southeast Asian Nations (ASEAN) summit in Myanmar. Proposing a “diamond decade” between China and its Southeast Asian neighbors, China dangled $20 billion in loans to the ASEAN, offered to host an ASEAN-China defense-ministers meeting, and proposed the establishment of an ASEAN-China defense hotline. Among other things, China’s recent diplomatic offensive seems to have blunted any efforts by rival claimant states to develop a unified position vis-à-vis Beijing’s maritime assertiveness across the Western Pacific. No wonder, there was hardly any serious effort by the ASEAN and rival claimant states—with the exception of the Philippines—to push for a binding Code of Conduct (CoC) in the South China Sea. China has reverted to its tried-and-tested economic statecraft, leveraging large-scale trade and investments schemes to divide and dominate its neighbors.

To put things into perspective, one should acknowledge how just a few months ago, China seemed isolated. Earlier this year, China risked a major regional backlash when it dispatched multiple oil rigs into Vietnamese-claimed waters in the South China Sea, sparking panic among rival claimants and encouraging Pacific powers such as Japan, India and Australia to step up their strategic cooperation. Even ASEAN, notorious for its internal divisions and often-subservient stance vis-à-vis Beijing, was forced to express its displeasure with China’s provocative actions.

From Spain to Singapore, much of the international community emphasized the necessity for resolving the South China Sea disputes in accordance to international law; this was tantamount to an implicit statement of support for the Philippines’ arbitration case against China. In Vietnam, huge protests—largely spontaneous, leading to the destruction of Chinese-owned assets and massive exodus of Chinese citizens—placed tremendous pressure on the authorities to stand up to China, which, in turn, raised the risk of direct confrontation. China’s salami-slicing strategy confronted rising marginal costs, since rival claimant states such as Vietnam were now willing to stand up to China. Vietnam even entertained the idea of joining the Philippines in filing an arbitration case against China.

More worryingly, China’s historical rival, Japan, was able to capitalize on growing territorial tensions to carve out a new security role in the region, with the Abe administration proactively pursuing closer defense and strategic ties with Southeast Asian claimant states such as the Philippines and Vietnam, as well as middle powers such as India and Australia. China faced another crisis when anti-Beijing protests spread across China’s peripheries, from Taiwan to Hong Kong. Recent polls suggest that most countries in the region are worried by China’s territorial spats with its neighbors in the Western Pacific, with the citizens of Japan, Vietnam and the Philippines overwhelmingly viewing China as a main national-security threat. Polls in Hong Kong and Taiwan also suggest growing alienation of local citizens from Mainland China.

To head off a full-scale “soft-power crisis,” the Xi administration tried to reach out to its key neighbors. With respect to Vietnam, it withdrew its oil rig from disputed waters ahead of the announced schedule, intensified dialogue between their top decision makers (the Politburo members), augmented crisis-management mechanisms (i.e., hotlines) and welcomed a meeting between Sang and Xi.

Shortly after Indian prime minister Narendra Modi’s visit (early September) to Tokyo, which culminated in major investment and security agreements, Xi embarked on a high-profile trip to India. Although the bilateral summit was partly overshadowed by renewed tensions on the two countries’ disputed Himalayan borders, Xi was evidently seeking to prevent a full-blown strategic alliance between New Delhi and Tokyo. China pledged up to $20 billion in investment deals, with the two leaders signing twelve bilateral agreements on a range of economic, sociocultural and political issues. Most remarkably, China signaled its openness to a meeting between Xi and Abe, with the Japanese National Security Advisor Shotaro Yachi and Chinese State Councilor Yang Jiechi coordinating the mechanics and parameters of the much-anticipated event. Remarkably, Xi was willing to meet Abe, even though Tokyo refused to openly admit the contested nature of the Senkaku/Diaoyu islands—a long-standing Chinese precondition for any high-level talk.

Clearly, Xi aimed to defuse regional tensions, present China as a peace-seeking power and undermine efforts by Washington and its regional allies to constrain Beijing’s increasingly assertive posturing in the Western Pacific. Aside from avoiding regional isolation, China is also intent on chipping away at American leadership in the region. For almost seven decades, the United States has underwritten regional trade, freedom of navigation in the high seas and the national security of treaty allies and strategic partners in the Asia-Pacific region. The Xi Jinping administration, however, seems intent on establishing a Sino-centric order in its neighborhood.

China has already begun to flex its military muscle. In recent years, there has been an increase in incidents involving People’s Liberation Army (PLA) jet fighters and Chinese paramilitary vessels boldly harassing American and Japanese forces—as part of a broader attempt to deny foreign militaries access to China’s 200-nautical-mile Exclusive Economic Zone (EEZ). One possible reason for China’s increased assertiveness in the South China Sea may have to do with the PLA’s recent deployment of advanced nuclear submarines to the area, a crucial step towards dominating adjacent waters. To remind the United States of China’s astonishing leaps in military technology, the PLA made sure that the testing of its two prototype stealth fighters (J-31 and J-20) coincided with the visits of top American leaders to China, first during then U.S. Defense Secretary Robert Gates’ visit to China in 2011, and recently during Obama’s visit to the APEC summit.

But China’s most potent challenge to American primacy in Asia lies in the economic realm. Beijing has proactively pushed for a whole host of alternative financial arrangements and development institutions in the region and beyond. The TPP has been hobbled by deadlocks in negotiations, with both the Obama administration and its negotiating partners, especially Japan, facing tremendous domestic opposition to the proposed trading agreement.

Meanwhile, China has been pushing for the Regional Comprehensive Economic Partnership (RCEP), which excludes the United States and aims to integrate China’s bilateral trading agreements with major regional economies in Asia into an overarching trading network. Last month, China inaugurated the Asian Infrastructure Investment Bank (AIIB), with $50 billion in initial capital. The AIIB is widely seen as potential rival to the U.S.- and Japanese-led Asian Development Bank.

Under the New Silk Road project, which aims to connect China to Europe (via Central Asia and the Middle East) along the ancient Silk Road, China is offering up to $40 billion of infrastructure funds to a whole host of countries spread across the Eurasian landmass. Interestingly, China is also looking at a Maritime Silk Road, which will integrate neighboring Southeast Asian countries into a transcontinental, Sino-centric New Silk Road. For centuries, Manila served as the major port in Southeast Asia, acting as a key element of the pan-Pacific Galleon trade, but its ongoing territorial spats with China have raised speculations that Beijing could bypass the Philippines—if it refuses to change tact—in favor of Singapore and Indonesia, the ASEAN’s two most influential members, which will be crucial to prospects of a unified regional position on the South China Sea disputes.