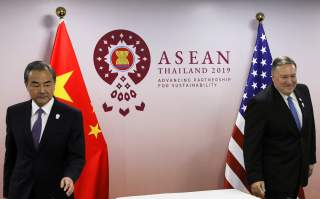 Reflecting on the future of Sino-American competition in Asia, the late Singaporean Prime Minister Lee Kuan Yew argued that there is a widely “held consensus that the U.S. presence in the region should be sustained,” because “military presence does not need to be used to be useful,” and that American “presence [alone] makes a difference and makes for peace and stability in the region.” An enlightened realist, Lee saw this formula most relevant in the case of the South China Sea disputes, since “China will not let an international court arbitrate territorial disputes in the South China Sea”—a claim that proved prophetic, when China categorically rejected the Arbitral Tribunal award at The Hague years later.

For the Singaporean leader, the best antidote to Chinese revanchist instincts and defiance of international law is “the [continued] presence of U.S. firepower in the Asia-Pacific” so that the “[United Nations] Law of the Sea [will] prevail.” In short, he saw international law effect so long as it’s anchored by America’s naval prowess. And it’s precisely within this context, namely Southeast Asian nations’ desire for an American counterbalance to Chinese hegemonic ambitions, that one should understand the relevance of the inaugural ASEAN-U.S. Maritime Exercise (AUMX) in early-September. The five-days-long exercise covered a vast expanse of waters, stretching from the Sattahip naval base in Chonburi province in Gulf of Tonkin to Cape Cà Mau on the Cà Mau Peninsula in Vietnam.

There were also non-drill activities in archipelagic Southeast Asian nations of Brunei and Singapore, which permanently hosts American Littoral Combat Ships. The geographical pivot of the exercises was the South China Sea, with both the United States and the ASEAN signaling their shared interest in keeping Chinese maritime ambitions at bay. Interestingly, the first U.S.-ASEAN joint maritime drills came just a year after a similar exercise between the ASEAN and China. Thus, the AUMX was less about the United States rallying smaller countries against China, but more a reflection of the ASEAN’s sophisticated policy of omni-balancing—namely, preserving maximum strategic autonomy through sustained, non-committal engagement with (competing) major powers. This way, the ASEAN aims to constrain a rising power’s aggression though flexible cooperation with the status quo power.

Officially, the AUMX was as low-key as possible, deliberately designed to have maximum symbolic value without any provocative drills. Both sides formed a combined task force, which saw the participation of 1,260 personnel, four aircrafts, and eight warships from eleven nations.

Both sides were adamant that the drills were not directed against any specific country, namely China, but instead facilitated military-to-military diplomacy as well as enhanced interoperability vis-à-vis non-traditional security threats.

The exercises were overseen by Thailand’s (the current ASEAN chairman) Royal Thai Navy and the Pentagon. Vice Admiral Charoenpol Kumrasee, chief-of-staff of the Royal Thai Fleet, and Rear Admiral Kenneth Whitesell, deputy commander of the U.S. Indo-Pacific Fleet, jointly led the AUMX. The Thai naval chief made it clear that the exercises aim “to train the regional navies in delivering humanitarian assistance and mitigating disasters,” while his American counterpart maintained that they help “the understanding of how we are going to operate together” in response to shared security concerns.

Nonetheless, the exercises were aimed at China, not directly in terms of military drills and assets, but instead strategically, namely by signaling shared concerns over rising maritime tensions in the region and the ASEAN’s continued confidence in American leadership. The AUMX marks the culmination of the US’ decades-long engagement with the region, including through the Southeast Asia Cooperation Training and the Cooperation Afloat Readiness and Training drills, as well as regular bilateral and minilateral exercises with regional allies such as Thailand, the Philippines and Singapore as well as new strategic partners such as Indonesia and Vietnam.

In its latest Indo-Pacific Strategy report, the Pentagon made it clear that it’s “prioritizing new relationships” in Southeast Asia, focusing on “key players,” which are “central in our efforts to ensure peace and underwrite prosperity in the Indo-Pacific” region. Though core ASEAN states such as Malaysia, Indonesia, Vietnam and Singapore are not formal America allies, they are “aligned with the region’s shared vision for a free and open Indo-Pacific and are focused on maintaining peace, stability, and prosperous economic development in the region.”

The exercises were also a response to China’s proactive naval diplomacy in recent years. Since 2018, China has conducted three major joint naval drills with either the ASEAN as whole or key Southeast Asian countries, beginning with China’s People’s Liberation Army Navy (PLAN) simulated naval drills with regional states in Singapore’s Changi naval base in August 2018. Months later, China hosted the inaugural China-ASEAN Maritime Exercise in Zhanjiang, Guangdong, which saw American treaty allies such as the Philippines experiencing their first ever joint naval drills with China. Eager to demonstrate its growing military prowess, the PLAN deployed advanced naval assets, including the Guangzhou multi-missile destroyer and the Huangshan type 054A-class frigate.

Just months ahead of the AUMX, China and Southeast Asian countries conducted the Joint Maritime Drill 2019 in Qingdao, where the commander of the PLAN, Vice Admiral Shen Jinlong, proudly proclaimed the drills as a part of China’s vision of “building a maritime community with a shared future” with smaller neighboring states. China’s proactive naval diplomacy, however, has gone hand in hand with increasingly aggressive militarization of the disputes in the South China Sea, which has perturbed neighboring countries as well as the United States.

On top of this, the ASEAN has also been fretting over China’s overbearing diplomacy and exclusionary vision for the region. This was poignantly on display when Southeast Asian countries were dismayed by Beijing’s audacity, during the negotiations of a Code of Conduct in the South China Sea, to demand veto power over regional states’ prerogative to “hold joint military exercises with countries from outside the region, unless the parties concerned are notified beforehand and express no objection.” This violates clearly violates a core tenant of Southeast Asian diplomacy, namely a commitment to preserving post-colonial nations’ strategic autonomy through promotion and preservation of an inclusive order in East Asia. Thus, the AUMX was a critical step towards fulfilling the ASEAN’s vision of an open and peaceful regional security architecture, which is not dominated by China and involves all major stakeholders, including the United States. It’s a testament to the sophistication of the ASEAN’s diplomacy and American’s enduring influence in the region.

Richard Javad Heydarian is an Asia-based academic, currently a Research Fellow at National Chengchi University (Taiwan), and author of, among other works, The Rise of Duterte: A Populist Revolt against Elite Democracy and The Indo-Pacific: Trump, China, and the New Struggle for Global Mastery.