Assange Should Get What He Deserves 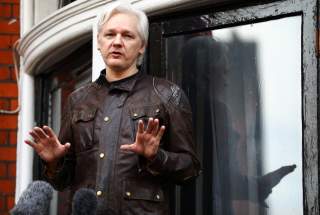 Julian Assange claims that he is a journalist. My foot. He may or may not have been a paid Russian agent, but for all intents and purposes he was. His aim was to do as much damage to the United States as he possibly could. With the help of a traitor named Chelsea Manning he undermined American diplomacy and probably endangered American lives. He followed up that triumph of treachery by attempting to influence the outcome of the 2016 election, most likely working in cahoots with the Kremlin. While he did not determine its outcome, he certainly contributed to it and, in doing so, certainly did not displease his Russian collaborators.

Genuine journalists do not have evil intentions. Those who leaked the Pentagon papers did so because they were concerned that the United States government was lying to its people even as thousands of young Americans were dying in the rice paddies of Vietnam. Woodward and Bernstein went after “All the President’s Men” because they discovered that the White House was obstructing justice. Assange’s objective was neither to get to the truth behind the pursuit of a war whose costs in lives and treasure were continuing to mount, or to prevent any further attempts to undermine the American system of checks and balances. His objectives were purely malign. Were his motives truly noble, he might perhaps have investigated the goings-on in Trump Tower during the summer of 2016.

Assange is desperately fighting extradition to the United States because he knows that he is no different from an accomplice to Al Qaeda. Their aims are identical; both seek to weaken, if not destroy, America and the democratic system it embodies.

Assange’s defenders are already screaming that his extradition and inevitable conviction in an American court will silence investigative journalism in the United States and elsewhere. That is as nonsensical as Assange’s claim to be a journalist. Both arguments should be treated with the contempt they deserve.

There are limits to free speech that apply to journalists just as they do to ordinary citizens. The First Amendment to the Constitution does not protect someone from shouting “fire” in a crowded theater. Similarly, it does not protect a journalist who maliciously harms the nation’s security, as Assange did. Those who believe otherwise are by definition America’s enemies, and deserve whatever punishment the courts mete out to them. Moreover, just because the Espionage Act is ninety-five years old does not mean that it no longer is relevant; it can and should be the basis for prosecuting those who deliberately seek to undermine America’s security.

If, as many hope, Assange is extradited to the United States and convicted under the Espionage Act or another statute, it should indeed cast a pall over those whose malign intentions endanger Americans. It will in no way restrict the activities of legitimate investigative journalists who uncover true improprieties on the part of government at any level and in any place. As for Assange, he should spend the rest of his life behind bars. Too bad that, thanks to the generosity of the American taxpayer, he will still be able to enjoy three good meals a day, engage in sports and other activities, and even earn a degree. Were he in another country’s prison, the Lubyanka for example, life after Wikileaks would not be so good.