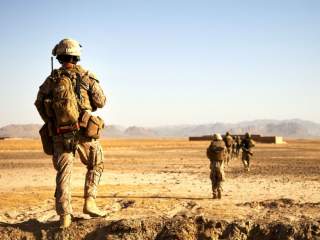 The eroding political and security dominion of the government of Afghanistan has once again raised the potential of increased U.S. military and civilian assistance. President Obama made the complete withdrawal of U.S. military forces by the end of 2016 a central premise of his policy toward Afghanistan, but on the advice of his military and civilian staffs, he has modified that target. The new one is 9,800 troops through most of 2016, and 5,500 by the effective conclusion of his term. Moreover, he curbed the mission of these remaining troops to training and assisting the Afghan National Defense and Security Forces (ANDSF) and to counterterrorism.

However, the Pentagon’s fourth-quarter assessment of security in Afghanistan noted that “[through] the second half of 2015, the overall security situation in Afghanistan deteriorated with an increase in effective insurgent attacks and higher [ANDSF] and Taliban casualties.” Indeed, the September collapse of the ANDSF and the civilian government in Kunduz, previously safely in government hands, and its stunning (if only temporary) capture by the Taliban, shocked Kabul to the core. Retaking it became the government’s highest priority, and the city proper was recaptured in a concerted military effort days later, although the surrounding provincial countryside remains contested.

Similarly, Badakhshan province, also securely in government hands a few years ago, is now also contested. So, too, are Faryab and Uruzgan. Helmand Province, the traditional home of the Taliban, has been almost entirely lost; only three of its fourteen districts remain under government control, at best, and its provincial capital is surrounded. Likewise Kandahar, the Taliban’s “capital,” remains (optimistically) disputed.

Meanwhile, over 1,800 Afghan soldiers and police were killed in the first third of 2015 and another 3,400 were wounded, almost 66 percent more than the previous year. Most troublingly, out of near desperation, the government is turning for security to the same marauding warlords and private militias it pledged previously to crush.

The insurgency is now also divided between the Taliban and Daesh, that is, Islamic State. The Taliban are now, unexpectedly, the relative moderates, but they have had their own internal splits since the death of Mullah Muhammad Omar. Although Daesh has enjoyed only limited inroads so far, it has considerable momentum, much of it at the Taliban’s expense. More importantly, perhaps, Daesh redefines an insurgency pole pulling the Taliban in more fundamentalist and rejectionist directions, and probably narrowing the limits for any negotiated settlement to which the Taliban can agree and commit.

So the government, and indirectly the coalition, is now confronted by a decaying security context; a degenerating and corrupt military and police force; a resurgent and growing, rather than waning, insurgency; two rebellious adversaries, one more virulent than the other; an inimical regional neighborhood, especially in Pakistan; and a foreign coalition that resembles the (disappearing) Cheshire cat.

In that context, it cannot be surprising that outgoing Resolute Support commander, U.S. General John Campbell, wants either to enhance not reduce his force structure if the deterioration is to be stanched, never mind reversed. “Afghanistan has not achieved an enduring level of security and stability that justifies a reduction of our support in 2016," he recently told the Senate Armed Services Committee. President Obama’s advisors are wary of asking him again to abandon his troop targets and at least retain, if not increase, the current military and civilian assistance levels, which would mean handing his successor a U.S. military engagement in another unresolved conflict (beyond Iraq and, now, Syria), one which he promised to liquidate.

The “reduction alternative,” they understand, would court the likelihood of Afghanistan’s continued deterioration. Ultimately, it could once again become a Taliban state, complete with human rights abuses, and the loss of everything that has been gained at such expense in Afghan and coalition lives and funds, particularly health and education. That alternative also threatens Obama’s legacy. But personal legacy is no reason to go to war—or extend one. Neither, unfortunately, is the yearning to preserve the past investment of lives and treasure by doubling down on them.

But is that the right result? If so, under what conditions?

The U.S. response in 2001 was visceral. It reflected and constituted an emotional retort to the terrorism that took thousands of lives in New York, Washington and Shanksville: “The people who knocked these buildings down will hear all of us soon,” said President George W. Bush at the destroyed World Trade Center. “Make no mistake, the United States will hunt down and punish those responsible for these cowardly attack,” he vowed. And “we will make no distinction between the terrorists who committed these acts [Al Qaeda] and those who harbor them [the Taliban],” he said in his TV address the night of the attacks. Hand over Al Qaeda’s leadership, or you go too: understandable without a doubt, but a response of passion, not one of geopolitics or strategy.

Instead of a surgical strike against the Al Qaeda leadership, the result was an all-out assault to remove the Taliban hosts and replace their government with one essentially chosen by the coalition countries, albeit through a tradition-based (but modified) Loya Jirga. After that, General Colin Powell’s “Pottery Barn slogan” prevailed: you break it, you own it. So the United States and its coalition partners came to “own” up to one hundred thousand troops and billions of assistance dollars, leading to the government and military disappointments and failures we see today.

Unlike the visceral response in 2001, there should now be a clear, well-considered purpose and strategy, with a well-defined relation between the ends and the means to achieve them. Goals and plans should reflect a limited allocation of resources. That limitation should be commensurate to our own national interests; to what we can actually, not hyper-optimistically or theoretically, expect the Afghans to achieve; and to other global U.S. commitments and purposes. Those expectations should also reflect a realistic time-table and realistic measures. What is the plan? Over what time frame? With what mileposts? With what costs? Who will bear them?

Were Afghanistan a vital national interest of the United States or any of the coalition partners, let alone an existential one like, say, World War II or the Cold War, these particulars might not matter as much. We would, appropriately, expect an “all-in” strategy. And Afghanistan represents the opposite of Japan, South Korea and Germany, all of which are vital U.S. national interests and in none of which the remaining U.S. forces are at constant risk. Moreover, while the coalition can help create security, the main security role has passed to the ANDSF. Although the ANDSF has exceeded expectations in some arenas, overall its performance and prospects remain woefully inadequate and are not improving sufficiently, if at all. Notwithstanding the many Afghan heroics and casualties, the constant desertions from and corruption within the ANDSF are hardly reassuring, least of all to Afghans. Security is a necessary but woefully insufficient condition to achieving the political, economic and governance success that would confirm a peaceful, and even modestly satisfactory future for the country.

Some argue that “we cannot let the Afghans down,” that “we” have achieved some important successes and raised expectations. All would likely be dashed by a Taliban victory. Afghanistan would be plunged again into some version of a seventh-century polity. We broke it; we own it. But we did not break it, at least not alone. The decades between the turn of the century and the Soviet incursion in 1979 saw internal conflicts, along with coups against and assassinations of four kings and two presidents. That constant turbulence followed by the Soviet invasion; seventeen years of civil war (in which the United States supported the anti-Soviet mujahedeen); the Taliban sweep to reestablish safety and order; the coalition invasion to capture or kill Al Qaeda’s leadership and remove the Taliban; and the spectacular failure of President Hamid Karzai’s government—all these created the broken Afghanistan we now confront.

More pointedly, whoever “broke Afghanistan,” for the last fifteen years the United States and its allies have paid a huge human and financial price with no fix in sight. Where is the limit? Based on what? Unfortunately, the price for exceeding that limit will be paid by Afghans, especially the young and especially women. The alternative, however, is a prodigiously large and indefinite mortgage on the human and financial resources of the coalition countries without a reasonable prospect of satisfactory success, and without even a credible, reliable Afghan partner of integrity. What will endure is the continued rape of the available Afghan and international lives and assets by a venal, kleptocratic elite, purchasing extremely comfortable futures in the Gulf or elsewhere through coalition lives and largesse.

In short, the United States and coalition need a very clear, realistic strategy, including a distinct articulation of specific purposes, goals and mission; a plan for actually achieving them; and an explicit articulation of risks. A strategy must also include an unequivocal list of conditions for the Government of Afghanistan (together with metrics for assessing performance); an upper limit on the projected military, civilian and financial assets; a realistic termination date; anticipated mileposts along with costs and who will bear them; and an endgame other than the improbability of total victory. Absent all of that, the current plans, resources and temporary extensions should be, at best, the upper limit of coalition commitments. Similarly, civilian assistance should come in tranches that should be released only if these various conditions and metrics are achieved.