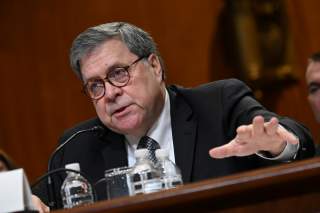 For two days Attorney General William Barr has testified in front of both the House and Senate Appropriations Subcommittees on Commerce, Justice, Science, and Related Agencies. The official purpose of the testimony was to discuss the Justice Department’s requested budget for fiscal year 2020. This innocuous cover did not stop representatives from repeatedly asking Barr for details about the recently-completed Mueller report and the surrounding investigation. While attempting to preclude long-form answers prior to the report’s imminent release, Barr did give his opinion that law enforcement agencies did spy on the 2016 Trump presidential campaign.

“We are not here today to be in a confrontational situation with you. We want to help you do your job. And you need to help us do ours,” Subcommittee chair Jose Serrano (D-NY) assured Barr. Serrano’s light touch was replaced by the more biting comments of Congresswoman Nita Lowey (D-NY), chair of the Appropriations Committee. She addressed what she called Barr’s “unacceptable handling” of the Mueller report. Having “cherry-pick[ed] the most favorable conclusion possible for the president,” Barr’s distillation of an over 300-page report to just four pages was “more suspicious than impressive,” Lowey said.

Barr’s opening statement touched on violent crime, the opioid crisis, and securing the border. He said the DOJ’s budget was requesting appropriations for one hundred new immigration judges to help file asylum applications that are causing the current crisis on the U.S.-Mexico border. This expansion would bring the total number of immigration judges to 634, which is more than double the number in Fiscal Year 2016. The attorney general’s opening statement did not mention the Mueller report.

When asked by Congressman Serrano, Barr explained which aspects of the Mueller report the Justice Department planned to redact before it’s release. This included parts that included Grand Jury information, information that the intelligence community believes would reveal sources and methods, any information that could interfere with ongoing prosecutions, and “information that implicates the privacy or reputational interest of peripheral players where there is a decision not to charge them.” Barr stated that the full report, absent those four categories, would be released to the public “within a week.” Barr also specified that each redaction would include a clarification to explain which of the four categories the information fell under.

Ranking Member Robert Aderholt (R-AL), who later on during the committee hearing chastised his fellow members for supposing a “grassy knoll conspiracy theory” to hide the report, was the first to address the issue of spying. Stating that “one of the most sacred rights…of Americans is not to be spied on by the government,” Aderholt mentioned Congressman Devin Nunes’ recommendation to the FBI of eight individuals for alleged misconduct.

Attorney General Barr responded that “The office of the inspector general has a pending investigation of the FISA process in the Russian investigation, and I suspect that will be complete in probably May or June I am told. So hopefully we’ll have some answers…on the issue of the FISA warrants. More generally I am reviewing the conduct of the investigation and trying to get my arms around all the aspects of the counterintelligence investigation that was conducted during the summer of 2016.”

The allegation of spying comes from the FISA warrant issued against energy consultant and Trump campaign advisor Carter Page in October 2016. The FBI obtained a warrant for surveillance from a federal judge, using the now discredited Steele dossier and an article by Michael Isikoff on Yahoo! The FBI did not reveal to the judge that the dossier was unverified or that it had been collected as campaign opposition research, or that Isikoff’s article was not an independent source but had been based on the same dossier. The dossier, along with the double-dipping charade, was enough to get a FISA warrant that had been rejected that July for lack of probable cause. Once the intelligence community was able to spy on Carter Page, they were able to soak up the communications of the Trump campaign in what’s referred to as “incidental collection.”

Surveillance became an issue during Barr’s testimony before the Senate subcommittee as well. “I think spying on a political campaign is a big deal,” said Barr, who reminded the senators about the improprieties the intelligence community took in the 1960s and 1970s when spying on the domestic civil rights and antiwar movements. In the same period, the CIA infiltrated and spied on Republican nominee Barry Goldwater’s 1964 presidential campaign. Asking for the attorney general to elaborate his concern, Senator Jeanne Shaheen (D-NH) asked, “So, you’re not suggesting, though, that spying occurred?” After a thoughtful pause, Barr answered in the affirmative. “I think spying did occur…the question is whether it was adequately predicated, and I’m not suggesting it wasn’t adequately predicated but I need to explore that. I think it’s my obligation. Congress is usually very concerned about intelligence agencies and law enforcement agencies staying in their proper lane and I want to make sure that happened. We have a lot of rules about that.”

Barr was quick to clarify that no staff had been put together and what he was referring to was not an investigation of the FBI itself. If there was malfeasance in the FISA process, Barr believes it was “not endemic” to the agency, but “a failure among a group of leaders there among the upper echelon.”

With the reemergence of “Spygate” grabbing the headlines, the Democratic Party’s ability to use the Mueller investigation as a bludgeon against the White House shrinks by the day. “Democrats are trying to undercut Barr as a reliable narrator of Mueller's findings. Whether that works once the more or less full report is out depends on how many new Trump Tower meeting-style incidents it features,” said James Antle, editor of the American Conservative, to TNI.

“Democrats were hoping Mueller would find something worse than the congressional committees discovered. Since it appears he did not, they are going to play up every incident where team Trump's responses to Russian interference were unseemly, ethically questionable or incompetent. If there are any legitimate discrepancies between Barr and Mueller, all hell will break loose,” predicted Antle.

Fred Wertheimer, longtime ethics activist and president of Democracy 21, thought Attorney General Barr’s “appearance and his performance so far has been unsatisfactory, and somewhat hard to understand.” In an interview with TNI, Wertheimer explained that Barr was not doing everything in his power to get as much information as possible released to Congress regarding the Mueller report. “[H]e [Barr] gave no answer to the question of why he would not ask the federal courts to allow Congress to get the grand jury testimony when in the case of Presidents Nixon and Clinton that’s exactly what happened. He just said, ‘I’m not gonna do it.’ That is not a satisfactory answer from someone in his position and it certainly leaves the impression that he’s not going to do it because he’s trying to protect the administration, which is not his job in this case.”

Furthermore, said Wertheimer, was “this category he has come up with about redacting information about peripheral third parties. Well in theory there could be good reason for that. But he has created a cloud that leaves one highly uncomfortable with the idea that he’s just going to make decisions on the merits.” The attorney general clarified during his Senate testimony that eligible third parties do not include “office holders,” and only people in private life.

“[T]he House Judiciary Committee is going to file a subpoena and go to court to get the full report which will be given to them no doubt in some form of secret limitations. The House Intelligence Committee has said it’s going to insist on getting all the information that relates to the intelligence investigation that took place here, which was separate from the criminal investigation. This is by no means over, but the first stage of the next round is going to come when Congress and the public see what Barr has decided to allow the public to see,” concluded Wertheimer.

Daniel McCarthy, editor of Modern Age, disagrees with that assessment, believing all that remains of the Mueller investigation is theatrics. “The special counsel recommended no further prosecutions, but that verdict hasn't been the end of the case. Legally, however, it is: what we've seen since Mueller completed his investigation has been political hype, which is also what we saw from Democrats and much of the media while the investigation was ongoing. The release of the text of the report won't change anything, except the same hype will now be decorated with quotes,” McCarthy told TNI.