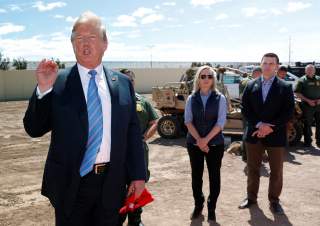 After several tumultuous months of fighting Congress, President Donald Trump traveled to California on Friday to ceremoniously inaugurate the construction of his long-promised wall along the U.S.-Mexico border. Before touring already-constructed barriers in Calexico, the president sat down for a fifty-minute roundtable which included local members of both Border Patrol and Immigration and Customs Enforcement (ICE); Lieutenant General Todd Semonite, the commander of the U.S. Army Corps of Engineers; Custom and Border Protection Commissioner Kevin McAleenan; and then-Homeland Security Secretary Kirstjen Nielsen.

On the topic of the wall, the president was proud to say that 400 miles would be constructed in the next two years in the most desperate areas along the 2,000-mile U.S.-Mexican border. Lieutenant General Semonite was more specific. He said that with the money appropriated by Congress and “directed” by Trump, the military would have 450 miles of wall finished by December 2020.

The president backed away from his threats to close the U.S.-Mexico border, both when speaking to reporters before the California trip and during the roundtable. “I’m totally willing to close the border,” Trump emphasized, before saying that Mexico had been doing great over the past few days stopping migrants on their way north. If the Mexican government continued to discourage migrants from reaching its border with the United States, Trump seemed comfortable keeping the border open. This also comes after Trump’s advisors' counseling that such an action would have national repercussions on the U.S. economy, with nominal-ally Senator Ted Cruz saying it “would be devastating to Texas.” But later, the president mused that he might close the border after all if his proposed tariffs against the importation of Mexican cars proved unsuccessful.

The point that Donald Trump repeated ad infinitum was that “our system is full.” Infrastructure at the border has reached its breaking point, with an urgent lack of housing for individuals, and especially families, apprehended at the border. According to the president, this lack of available space justifies refusal of entry to new arrivals. “We have a system that’s full. It’s just full. And I was telling some of the people before, if it’s full there’s nothing you can do about it. We’ve had some horrible court decisions that have been made over the years. It’s very unfair, and that’s the way it is. But the system is full. And when it’s full there’s nothing you can do. You have to say, ‘I’m sorry, we can’t take you.’ We’ve been trying to take people, and I have to disagree with it. But we’ve been trying to take people, and you can’t do it. You can’t do it. We’re going to look at that and we’re going to look at it very strongly.”

“Our country is full. Our area is full. The sector is full. So turn around, that’s the way it is,” said Trump in a bumper sticker-like fashion.

President Trump was also highly critical of the way the country handles asylum applications. “The asylum laws are broken. They’re totally broken,” he complained. Under international law, governments are required to accept asylum applications from foreigners and grant them temporary safety if the situation warrants. The crisis on the southern border has arisen due to the numbers of people, especially families, traveling from Central America and overwhelming the system. Most of the asylum applications, if they’re able to get a hearing, are thrown out. A clear majority of the people reaching the border are not legally considered refugees fleeing violence, but are economic migrants seeking jobs.

“You know I look at some of these asylum people; they’re gang members,” Trump warned. “They’re not afraid of anything. They have lawyers greeting them. They read what the lawyer tells them to read. They’re gang members. And they say, ‘I fear for my life.’ They’re the ones that are causing fear for life. It’s a scam, okay, it’s a scam. It’s a hoax. I know about hoaxes, I just went through a hoax.”

During the presentations, ICE agents portrayed themselves as representative of an agency that’s overwhelmed, understaffed, and underfunded. “We’ll take care of it,” Trump promised.

After the roundtable, where he was presented with an award by the Border Patrol, the president toured the Calexico border wall that had been replaced after 2017. He closed the day with a private fundraising dinner in Los Angeles.