How the Media Got it Wrong on Trump and Russia 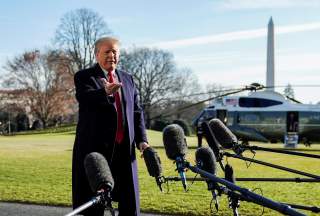 Over the weekend, the biggest bubble in years popped—not in the stock market, but in the media. The dominant narrative of the traditional media organs and major television networks, that President Donald Trump and his campaign colluded with the Russian government to subvert the 2016 election, was laid to rest after two years of hype, speculation, and ominous insinuations.

Special Counsel Robert Mueller, provided with open-ended legal authority to investigate allegations of Russian collusion, concluded his more than 300-page report on Friday. On Sunday, Attorney General William Barr released a four-page summary with the popular expectation that the full report will be released in the coming weeks. Quoting directly from the Mueller report, “the investigation did not establish that members of the Trump campaign conspired or coordinated with the Russian government in its election interference activities.” Coordination was defined by the report as “agreement—tacit or express—between the Trump campaign and the Russian government on election interference.” Mueller was unable to find evidence that the Trump campaign had even an unspoken understanding with the Russian government, and Attorney General Barr and Assistant Attorney General Rod Rosenstein have said there is not sufficient evidence to establish an obstruction of justice charge.

With the most anticipated investigation of the decade now concluded, some Republicans are angling to start their own counter-investigation. “What they should really be investigating is who started all this. This was a classic frame-up. It didn't come out of thin air,” said Rudy Giuliani, former New York City Mayor and personal lawyer to the president for the better part of the Mueller probe. Steve Bannon, former Chief Strategist for the White House, came to the same conclusion with CNN’s Anderson Cooper: “What was done at the beginning of this investigation of the Trump campaign? I think it’s really got to be looked into. And I’ve said now, Anderson, for over a year and a half, I believe something like the Church Commission is gonna have to be established to look into the FBI’s behavior in this, and the CIA.” In the 1970s, the Church Committee (a precursor to the U.S. Senate Select Committee on Intelligence) investigated significant and numerous civil liberties abuses by the CIA, FBI, and other parts of the national security state. Senator Lindsey Graham, Chair of the Senate Judiciary Committee, has signaled his interest in such an investigation.

The word being thrown around, from the New York Times’ Peter Baker to ABC’s Terry Moran, to Bloomberg’s Eli Lake, is “reckoning.” To quote from Lake at length, he explains, “[i]t’s a reckoning for Democrats who saw almost every development in this almost-two-year investigation as another dot connecting a conspiracy Mueller has not found. It’s a reckoning for many in the media that dutifully passed along this theory without scrutiny or context. And it’s a reckoning for many national security officials who abandoned their traditional nonpartisan role as custodians of state secrets to engage in a campaign against a president they loathed.” But do the “journalists” and politicians who got the story so wrong, and the national security officials who fed them the wrong story, have to worry about the consequences?

Some are trying to dodge the reckoning by isolating instances of media honesty. In the Washington Post, Erik Wemple unearthed such an exception: “On Oct. 31, 2016 — one week before the presidential election — the New York Times published an influential story under this headline: ‘Investigating Donald Trump, F.B.I. Sees No Clear Link to Russia.’” Wemple describes how “[t]he story by Lichtblau and Myers endured repeated and determined exhumations.” Liz Spayd, the last public editor at the NYT, said that the paper should have been more aggressive early on, similar to David Corn’s early reporting of the Christopher Steele dossier in Mother Jones and Franklin Foer’s Slate article about a Trump-linked server in a Russian bank. Since their publication, both of those examples have been proven false, written through bad sourcing and worse reporting. Regarding the Lichtblau and Myers article, Wemple concludes that “[p]erhaps all this digging and all this editorial oversight produced an okay piece of journalism, at least on the collusion front.” The question then becomes, if the Times was aware that the collusion story lacked provable bona fides as early as October 2016, why did it continue to enable the conspiracy for the next two and a half years?

The more prevalent response among the media class is to double down. This was the conclusion by Greg Sargent, also in the Washington Post, who adjudicated that “on balance, the decision to devote intense scrutiny and journalistic resources to the multiple Russia-related stories, and to Trump’s corrupt responses to them, has actually been vindicated [emphasis original] by the sheer gravity of all that has already been unearthed.” The negative repercussions from dozens of retracted headlines, two years of public hysteria, and the attempted delegitimization of the 2016 presidential election results is outweighed by the benefit of possible violations of campaign finance law and the prosecution of Paul Manafort for bank fraud. While it’s “certainly very significant” that there was no collusion with Russia, “[o]n balance, the media got this far more right than wrong.” What does it matter if the central claim of a story is discredited, as long as the peripheral claims are probably not hoaxes too?

Others would prefer to misrepresent Mueller’s conclusions and the Barr letter. The signature offender of this type would be New York Magazine’s Jonathan Chait, one of the more conspiracy-minded propagators during the investigation. Chait is upset that “News stories have trumpeted the verdict that Trump’s campaign did not collude with Russia—which is at best unproven, and at worst simply false—and have been forced into a defensive crouch for having the temerity to devote two and a half years to uncovering the broad web of secret financial and political contacts between Trump and Russia.” This explicit denial of the Mueller report’s conclusions is then hidden in runarounds and logical sophistry. Trying to parse the language of the Barr letter, Chait ignores that its conclusions are direct quotes from the Mueller report itself. Chait writes: “After treating nonpartisan intelligence and law enforcement officials as an untrustworthy cabal, Trump’s defenders now assign complete credibility and good faith to William Barr…One could make the case to trust all these officials, or to trust none of them. But the idea that Barr has more inherent credibility than the intelligence community or the FBI stretches all bounds of plausibility.” It is not Attorney General Barr making the claims but Special Counsel Mueller’s conclusions which are being quoted by Barr. It is a difference between asserting something without evidence and starting with no evidence. You cannot prove a negative.

In the final category are those who never cared about the Mueller investigations findings beyond what they could do to impeach Trump. “Trump has no one but himself to blame,” said neoconservative-turned-neoliberal Washington Post columnist Max Boot, whose insight equaled that of comedian Stephen Colbert. “And there would not have been such a widespread presumption that the president was guilty if he did not act so guilty.” For Boot, Donald Trump’s ultimate crime is being president. In a moment of projection, Boot criticized Trump’s defenders who “spent two years spinning absurd conspiracy theories centered on a nonexistent ‘deep state.’” For the single-mindedly anti-Trump Max Boot, the lack of collusion doesn’t change the fact that the Russian Internet Research Agency’s social media campaign, amounting to .00008% of 2016 election-related tweets, apparently won Donald Trump the presidency. “This was a big scandal, maybe the biggest in U.S. history, and it was entirely appropriate for Mueller, the media and Democrats in Congress to try to get to the bottom of it. Too bad Republicans were (and are) more interested in protecting Trump than protecting our national security.”

Where does the media go from here? MSNBC headliner Rachel Maddow, one of the biggest promoters of the Russian-collusion narrative, saw her ratings drop after the release of Mueller’s conclusions. According to the Daily Beast, MSNBC producers are wondering if they should continue giving a regular platform to former intelligence officer Malcolm Nance.

It’s unlikely many on-air guests will suffer repercussion for their inaccuracies or sometimes purposeful deceptions. Former Director of Intelligence James Clapper, despite perjuring himself during congressional testimony and misleading NBC’s Chuck Todd on-air, continues to be a guest on Meet the Press. On Wednesday, CNN’s Anderson Cooper interviewed former Lieutenant Colonel Ralph Peters who opined that “I may be utterly wrong. I may be influenced by my background as an intelligence officer. But again, I go back to what so far has not been addressed: the Steele dossier. And it’s been pooh-poohed and mocked. But that is the way the Russians do business. Given Trump’s behavioral profile, he was a perfect target, and if you want various explanations, the Steele dossier is one viable one.” Treating the Steele dossier, a raw document that over the course of almost three years has been repeatedly debunked as factually inaccurate, as a legitimate resource makes Peters a non-credible source.