Democrats Balk at Barr Letter, Where Will They Go From Here? 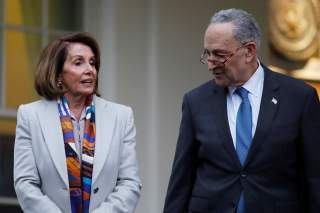 “Even if Trump was falsely accused, he only has himself to blame,” explained Late Show host Stephen Colbert, one of a coterie of late night commentators who have carried water for the Mueller investigation for two years. Now that Special Counsel Robert Mueller has concluded his investigation and, according to Attorney General William Barr, did not find sufficient evidence of conspiracy between the Donald Trump presidential campaign and the Russian government to warrant an indictment, promoters of the grand conspiracy are left to pick at the pieces.

While Colbert spent most of his monologue intimating that Barr was covering up evidence of collusion, non-comedians were unable to find a better answer. Pronouncing that Barr’s four-page summary released Sunday had no credibility, Democracy 21 President Fred Wertheimer said “it is all the more essential that Attorney General Barr promptly provide Congress and the public with the full, uncensored Mueller report and underlying documents, to enable Congress and the public to make their own determinations about the evidence that led Special Counsel Mueller to conclude that his report ‘does not exonerate’ President Trump on obstruction of justice.”

Wertheimer is referring to a partial quote in the Barr letter, which quotes the Mueller report directly as stating “while this report does not conclude that the President committed a crime, it also does not exonerate him” regarding allegations of obstruction of justice.

Lawfare, the national security blog published in cooperation with the Brookings Institution, pulled on a similar string. “While Mueller did not find that Trump obstructed his investigation, he also made a point of not reaching the opposite conclusion: that Trump didn’t obstruct the investigation. Indeed, he appears to have created a substantial record of the president’s troubling interactions with law enforcement for adjudication in noncriminal proceedings—which is to say in congressional hearings that are surely the next step,” read an analysis co-written by Lawfare’s editors.

Kevin Gutzman, a constitutional scholar and historian, believes people who are using this line of reasoning are purposely misleading their audiences. “The Special Counsel didn’t exonerate the president. Prosecutors don’t exonerate people. Neither do juries,” he said. “A prosecutor only decides whether there’s sufficient evidence of crime to secure unanimous conviction by a 12-man jury after a trial in which the burden of proof is guilt beyond a reasonable doubt, and a jury only decides whether he’s guilty beyond a reasonable doubt, yes or no.”

“That the Special Counsel’s report doesn’t exonerate the president is as surprising as that the sun rose in the east today. That’s what the sun does. Every time,” concluded Gutzman, adding that this is something any lawyer would know.

Knowledge of this basic legal truth did not prevent the Democratic leadership in Congress from snatching on to the word “exonerate.” In a joint statement, Speaker of the House Nancy Pelosi and Senate Minority Leader Chuck Schumer said, “[t]he fact that Special Counsel Mueller’s report does not exonerate the president on a charge as serious as obstruction of justice demonstrates how urgent it is that the full report and underlying documentation be made public without any further delay.”

Likewise, House Judiciary Chair Jerry Nadler tweeted that “There must be full transparency in what Special Counsel Mueller uncovered to not exonerate the President from wrongdoing. DOJ owes the public more than just a brief synopsis and decision not to go any further in their work.” Nadler followed up by saying the House Judiciary Committee would have Attorney General Barr testify in the near future to explain why he and Deputy Attorney General Rod Rosenstein concluded that the Mueller report did not contain sufficient evidence of obstruction to proceed.

TNI has previously detailed the investigations of the House Judiciary Committee and predicted they are unlikely to reach new conclusions. As the Barr letter mentions, Robert Mueller “employed 19 lawyers who were assisted by a team of approximately 40 FBI agents, intelligence analysts, forensic accountants, and other professional staff. The Special Counsel issued more than 2,800 subpoenas, executed nearly 500 search warrants, obtained more than 230 orders for communication records, issued almost 50 orders authorizing use of pen registers, made 13 requests to foreign governments for evidence, and interviewed approximately 500 witnesses.” It’s much more likely that Nadler’s efforts will be a retread of well-worn ground than lead to the discovery of new information.

Meanwhile, other Democrats are looking for greener political pastures. House Majority Whip Jim Clyburn said, “I believe that the Mueller report has been done. That’s a chapter that's closed. And I think that last night this administration opened a new chapter when it moved to completely invalidate the Affordable Care Act. And that to me is the number one thing on people’s minds.” Clyburn is referring to the Trump administration’s endorsement of a December ruling by a U.S. District Judge that declared the Affordable Care Act unconstitutional. This morning, chair of the House Democratic Caucus and rising star Hakeem Jeffries co-hosted a press conference, declaring that, “House Democrats were given the majority in order to defend health care on behalf of everyday Americans and that is exactly what we are doing.”

With no Russian collusion to wield for impeachment, and an “exoneration” debate over linguistics, the Democratic Party has reached a fork in the road: challenge Donald Trump in 2020 with investigations or policy?