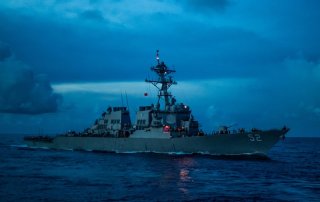 Mahan is back—tanned, rested, and ready!

On Tuesday, speaking at the Center for Strategic and Budgetary Assessments, Secretary of Defense Mark Esper unveiled a U.S. Navy force design titled “Battle Force 2045.” Administration policy and the law of the land require the navy to construct a 355-ship fleet, up from just under 300 today. If properly funded and executed, Secretary Esper’s plan would produce a 355-ship fleet by 2035—but only as an interim step toward a 500-ship fleet in 2045.

And he explicitly cited Alfred Thayer Mahan’s masterwork The Influence of Sea Power upon History, 1660-1783 as authority for bulking up the U.S. battle fleet for an age of peer-on-peer strategic competition. Mahan wanted the United States to construct a fleet capable of winning “command of the sea” from the strongest contenders it was likely to meet. Commanding important waters—in his words, amassing “overbearing power” that sweeps the waves clean of rival fleets—would permit America to conduct maritime trade and commerce more or less unhindered, choke off an enemy’s commerce, and support military strategy by landing troops or otherwise exploiting the oceans as a safe sanctuary for maritime movement.

Many blessings come from a dominant battle fleet.

Now, it’s important to note that while Esper rededicated the Pentagon and U.S. Navy to Mahanian ends, Mahan himself might blanch at the fleet design put forward this week to secure those ends. The sea-power prophet was a man of his times. In the ages of sail and steam, he maintained, fleets of “capital ships”—heavy combatants built to dish out and withstand “hard knocks” from their peers—should take to the sea to fight it out and determine who would control important seaways.

Yet Battle Force 2045 would rebalance the inventory away from aircraft carriers, cruisers, and destroyers—the capital ships of our day. The new fleet design would add large numbers of smaller, lighter, cheaper craft. In the words of Mahan’s contemporary Julian Corbett, “flotilla” vessels would constitute a major share of the battle force. Corbett partitioned fleets into capital ships; lightly gunned and cheap “cruisers” that fanned out in large numbers to police the sea once maritime command had been won; and the flotilla, swarms of lightly armed or unarmed, even less expensive ships constructed to carry out the administrative duties all navies must carry out.

But Corbett observed that a “revolution beyond all previous experience” was convulsing naval affairs even as he wrote, a century ago. Newfangled platforms were entering service, notably the submarine; meanwhile sea mines and torpedoes superempowered subs and surface flotilla craft. All of a sudden the flotilla could land heavy blows against an oceangoing fleet of capital ships if it ventured within reach.

New technology turned naval strategists’ world upside down. And Corbett’s revolution has only continued and accelerated over the past century with the advent of the guided missile. Nowadays flotilla vessels can smite hostile forces scores or hundreds of miles away with precision-guided arms.

And this is right and fitting. Washington’s paramount goal vis-à-vis Beijing should be to deter misadventures or defeat them if China’s leadership plunges ahead. Threatening to deny China’s navy and merchant fleet access to the high seas—now as during Mahan’s and Corbett’s day, a thoroughfare for trade and military pursuits—is a quintessential Mahanian goal and would comprise a daunting deterrent to mischief.

But Mahan and Corbett thought mainly in terms of open-sea battles. Today geography is an ally for the United States and its allies. To exert overbearing power outside Asia’s “first island chain,” achieving the Mahanian ideal, allied forces need only seal up the straits that permit access from the China seas to the Western Pacific and back. They can do that with today’s counterparts to the Corbettian flotilla—subs, surface patrol craft, aircraft, unmanned vehicles, and bodies of U.S. Marines or Army soldiers lofting anti-ship and anti-air missiles from the islands themselves.

Capital ships would roam the Western Pacific, rushing to points of impact along the line if a Chinese breakthrough appeared imminent. That’s what walls have done for military forces throughout history: they limit and channel breaches so that mobile forces operating in the rear can meet hostile forces from a position of tactical advantage. Suitably fortified, the first island chain would be the allies’ offshore wall against Chinese aggression. Light forces would defend the ramparts while heavy forces provided a backstop—and China’s navy would have a bleak day.

A few other random comments on Esper’s address. First, he reset the terms of debate about U.S. Navy force structure. In recent years it has become commonplace to lament how the navy will never reach a 355-ship inventory, chiefly because naval leaders’ vision remains centered on pricey major combatants that are unaffordable in bulk. Esper made 355 the floor for navy force structure, not an unreachable ceiling. And he agreed to let naval magnates reapportion money within the current budget to enrich shipbuilding accounts. If Congress chooses to allocate more, all the better.

Second, Esper’s salesmanship and branding improve on that accompanying the campaign for a 355-ship navy. Call it numerology or whatever, but round numbers capture people’s fancy—the more zeroes the better. That’s why celebrations at the turn of a decade, century, or millennium occasion more fanfare than an ordinary New Year’s—even though there’s no astronomical difference between them and ordinary years. Similarly, the Reagan administration’s push for a 600-ship navy resonated in large part because of the number 600.

The number 355 isn’t much of a rallying cry, but the round number 500 may well lodge in lawmakers’ and rank-and-file citizens’ brains, helping make naval affairs a daily topic of debate in Washington DC and beyond. Esper reinforced the point by invoking the Reagan shipbuilding program. Shifting around money, noted the secretary, will let today’s navy equal the fraction dedicated to laying new keels during the 1980s buildup toward 600 ships. Esper selected a number that should shape the debate while putting the new initiative in historical context.

China poses challenges on par with those once posed by the Soviet Union. Drawing the comparison could help build momentum in Congress and the electorate toward a bigger U.S. Navy to meet those challenges.

Third, naval advocates must not let themselves be swept away by euphoria over a 500-ship navy. Uncrewed or optionally crewed warships will make up one-third or so of that total. These are types that remain at the experimental stage. New technologies show promise to be sure. In fact, the unmanned surface vehicle Sea Hunter recently operated alongside the guided-missile destroyer USS Russell, hinting at a prototype for future operations teaming crewed with uncrewed platforms. But much remains to be done. The outcome is far from foreordained.

As with any hypothesis, the key to fleet experimentation is trying to falsify—meaning disprove—one’s own theories about technology, tactics, and strategy. Keeping a skeptical mindset toward fleet design is crucial. Otherwise, Battle Force 2045 will amount to a wish—and wishes often do not come true.

Rear Admiral Wayne Meyer, the father of the Aegis combat system, demanded that innovators “build a little, test a little, learn a lot” when experimenting with new hardware and systems. They must not rush untried systems into full-scale production lest expectations go unfulfilled and commanders lack working implements to execute strategy. Meyer’s slogan is worth tattooing on U.S. Navy and Pentagon culture. Let doubt never be effaced from fleet and strategic design.

Having started with Mahan, let’s close with Mahan. In a way, the Western Pacific is becoming a laboratory to test a theoretical question. Namely, what happens when one contender inspired by Mahanian ideas meets another in strategic competition? China has been all-in on Mahan for a couple of decades now, while Esper’s remarks represent the latest evidence that official Washington is renewing its fealty to the sea-power evangelist.

In the past Mahanian powers equipped themselves with more or less symmetrical fleets meant to duel in fleet actions. Arms races ensued. Today, though, a Mahanian China and a Mahanian America base their strategies less on fleets that would be familiar to Mahan and Corbett than on smaller seagoing vessels, not to mention shore-based missiles and aircraft. Even cyberwarfare and assets orbiting the earth play an increasing part. How strategic interactions will unspool in the Pacific remains to be seen.

James Holmes is J. C. Wylie Chair of Maritime Strategy at the Naval War College. His latest book, A Brief Guide to Maritime Strategy, was recently named a Naval Review Book of the Quarter. The views voiced here are his alone.