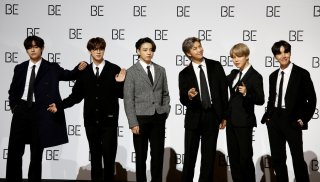 No doubt the wailing and gnashing of teeth in Pyongyang would be terrible to behold. And that would be in response merely to an announcement of creation of such a task force. Moon then could suggest the alternative of engagement and de-escalation, leaving the decision up to Pyongyang. Is Kim prepared to fight an all-out information war?

If no real human beings lived in the DPRK, then it should be kept as a museum, an exhibit of the horrors that people can afflict each other to. However, almost twenty-six million people live there. So vast changes are necessary. Someday, mercifully, North Koreans will be free.

In the meantime, the most important duty of Seoul and Washington is to keep the peace. One of the most powerful tools to do so would be to present an alternative path for the North. Ask Kim Jong-un how confident he is that his regime can win the battle for the allegiance of North Korea’s young? And what happens if he fails? That could prove to be the most powerful incentive available to convince him to make an enduring peace on the peninsula.

Doug Bandow is a senior fellow at the Cato Institute. A former special assistant to President Ronald Reagan, he is the author of Tripwire: Korea and U.S. Foreign Policy in a Changed World Follies and co-author of The Korean Conundrum: America’s Troubled Relations with North and South Korea.