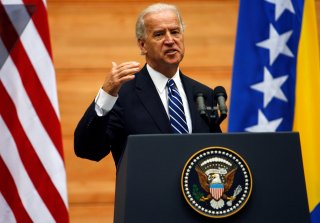 In the last days of the Iowa campaign in 2007, Democratic candidate Senator Joe Biden took to the airwaves to distinguish himself as a steady leader with broad experience in foreign affairs by claiming he ended the genocide in Bosnia. Biden touted his positions on Bosnia for most of his career, including during his successful run for the presidency in 2020.

Indeed, Joe Biden is considered a hero in Bosnia and Herzegovina and, even more so, among Bosnian-Americans. His victory over Donald Trump last year brought hope and prompted a public celebration in Sarajevo, one of the largest celebrations to take place in Europe.

Biden was one of the rare Democrats willing to criticize President Bill Clinton for inaction during the genocide in Bosnia and Herzegovina and stand up for the values upon which the United States was founded. His principled position during the Bosnian war was later used to defend his foreign policy track record mostly from criticism of his opposition to the First Gulf War and his support for the Iraq War.

Unsurprisingly, Biden energized the Bosnian-American community during his run for the presidency in 2020. The community backed Biden from the beginning, including during the Iowa caucuses, where, as a precinct captain in Des Moines, I helped the campaign turn out Bosnian-Americans.

Nearly ten months into his presidency, Biden’s Bosnia policy seems like a continuation of the most negative aspects of Trump’s Western Balkans policy. Appeasement of Serb and Croat nationalism in Bosnia, along with support for the dangerous territorial exchange between Serbia and Kosovo, is not what Biden promised to the Bosnian- and Albanian-American communities during his campaign. The fact that Biden left Trump-appointed State Department officials in charge of policy in a region that is the bedrock of his foreign policy legacy is even more dumbfounding.

Instead of satisfying his campaign promise to safeguard Bosnia’s territorial integrity and sovereignty—which is presently under the most serious threat in the last twenty-five years—Biden’s State Department officials are helping to deepen ethnic discrimination. U.S. officials have given overt support to EU-sponsored changes to Bosnian election law, which will radically alter the balance of power and unfairly privilege some demographics over others.

In a gerrymandered Federation, voters of the nationalist Croatian Democratic Union (HDZ) will be worth more than the rest of the voters in the entity of Federation of Bosnia and Herzegovina. This change will allow politicians to choose their electorate. If adopted, the resolution would render the country even less functional and directly contradict the verdicts of the European Court on Human Rights, as the human rights plaintiff Azra Zornic has argued.

After a serious drop in approval ratings following the hasty Afghanistan withdrawal and the deeply disappointing green-lighting of the Nord Stream 2 pipeline, Biden can hardly afford another foreign policy failure, especially in a country considered to be the centerpiece of his foreign policy legacy. Furthermore, betraying Bosnia to Serb and Croat nationalism will foment deep resentment among the mostly Muslim Bosniak communities across the world.

Working closely with EU commissioner Olivér Várhelyi—delegated by Hungarian prime minister Viktor Orban—sends the wrong message to progressive forces in the European Union, especially to Germany’s incoming ruling coalition. Germany's foreign policy will be run by the Greens—the party in the European Parliament most vocal about Bosnia, Serb nationalists’ threat of secession, and the danger posed by proposed election law changes.

A values-based foreign policy rooted in U.S. foundational values should not be applied exclusively to white and Christian nations, with lower standards for others. As Biden reminded the world in 1995, Bosniaks suffered a genocide simply because they were Muslim. Expecting Bosniaks, as well as many other citizens who do not belong to the three constituent peoples either because they are ethnic minorities or by choice, to accept second-class citizenship in a country in which they constitute the majority is a betrayal of the values that the United States holds sacred—that all humans are equal.

The Balkans-focused foreign policy community is not defending what the Biden administration is doing in Bosnia. Experts are critical and have unsuccessfully been issuing warnings about the consequences of this deeply flawed policy. But Biden can quickly change course and counter the threat posed by the Russian-supported Serb nationalist Milorad Dodik to Bosnia’s territorial integrity.

The administration’s National Security Study Memorandum on the Fight Against Corruption declares that countering corruption is a “core U.S. national security interest.” President Biden’s Executive Order On Western Balkans Sanctions opens the door for a new approach to the region. In addition to fighting endemic corruption, these new tools should be deployed against the Serb and Croat nationalists instead of appeasing them with more power and public resources.

The region is at a tipping point. Serb politician Milorad Dodik will resort to violence just like Slobodan Milošević did if there is no serious pushback from the United States. The key to weakening Dodik is exposing the rampant corruption that surrounds him—his kleptocratic network is intertwined with Russian president Vladimir Putin’s.

The Biden administration has made the global fight against corruption a national security interest for the United States. Recent announcements of new sanction instruments for fighting global corruption, including authoritarian kleptocracies, bear this interest out. The United States must use its new tools to fight corruption globally to include officials and businesspeople that support and enable Dodik and others like him.

The U.S. Congress, partly due to Biden’s activism, has been the driving force behind major decisions affecting the Western Balkans in the last thirty years. Should Biden fail to uphold his election promise, his former colleagues are there to hold him to account. Current Serb-centric policy does not send a good message to the Bosnian- and Albanian-American communities in key swing congressional districts ahead of the mid-term elections.

Reuf Bajrovic is the Vice President of the US-Europe Alliance in Washington, DC. He is the first Bosnian-American to serve as minister in the Government of the Federation of Bosnia and Herzegovina.