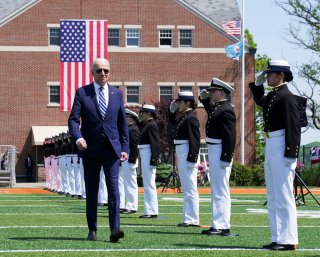 For weeks, the Biden administration and the Iranian regime have been sequestered at a posh hotel in Vienna, negotiating the terms of their mutual return to compliance with the 2015 nuclear deal (the Joint Comprehensive Plan of Action or JCPOA). After four rounds of negotiations, the Islamic Republic of Iran’s President Hassan Rouhani was quoted proclaiming that “almost all the main sanctions have been removed.” If that’s true, then it would be epic negotiating malpractice and, worse, an indefensible surrender of U.S. national security by  President Joe Biden’s lead negotiator Rob Malley to the world’s leading state sponsor of terrorism. Here’s why.

The Trump administration’s “maximum pressure” campaign has brought the regime in Tehran to the weakest point since the 1979 Islamic Revolution. More than twenty countries that were once regular oil customers of Iran have zeroed-out their imports. More than one hundred corporations have exited the Iranian market, taking with them billions of dollars in investment.

Iran’s Rouhani estimated that U.S. sanctions cost the Islamic Republic $200 billion. That’s $200 billion less to fund its terrorism abroad and atrocities at home. As the Hudson Institute’s Robert Greenway detailed, through the imposition of more than 1,600 designations the Trump sanctions

not only disrupted Iran’s surrogates and proxies; they also achieved unprecedented economic leverage, resulting in a 23 percent overall drop in Iran’s GDP, three consecutive years of negative GDP growth (the largest decline since 1983), an 84 percent drop in oil exports in two years (to the lowest levels in Iran’s history), a 58 percent drop in oil production in two years (the lowest levels its history), a record exchange rate for the rial (which climbed from 4,000 toman to 25,000 toman in two years), a current account balance at -40 percent (the lowest in its history), and less than $4 billion in accessible foreign exchange reserves—a drop from over $112 billion in 2017 (the lowest in history). The overall result is a $250 billion loss in overall economic impact.

Iran’s leader Ayatollah Khamenei has a weak hand. The Biden team should not strengthen it by surrendering its enormous negotiating advantage.

First, the Middle East has changed. The Trump administration’s withdrawal from the JCPOA was a big boost to renewed regional ties. The trust rebuilt between the United States and its regional friends, stemming from their shared recognition of Iran as the main destabilizing force in the region, led to the historic Abraham Accords between the Jewish state of Israel and its Muslim neighbors—the United Arab Emirates, Bahrain, Sudan, and Morocco. Re-entering a deal that friends of the United States found damaging to their interests would discard that trust and play into Iran’s hands.

Second, the regime cheated on the original deal. Israel’s daring liberation of Iran’s atomic archive in 2018, Iran’s nuclear chief Ali Akbar Salehi’s duplicity about a second set of Arak pipes, and the revelation of a secret nuclear weapons program headed by Mohsen Fakhrizadeh, before he was relieved of his position, provide ample evidence. There’s no reason to assume the terrorists have changed their stripes.

Third, like Mohsen Fakhrizadeh, the Islamic Republic’s chief terrorist Qassem Soleimani has been removed from the battlefield. That makes Iran’s power projection around the Middle East much less potent because, in terms of his influence, Soleimani cannot be replaced.

Fourth, the Obama team’s hopes that the 2015 nuclear deal would moderate the regime and lead to additional deals that address the full scope of its malign behavior, including terrorism, missile development, hostage-taking, and human rights abuses, never materialized. In fact, Iran’s malign activities continued unabated during the JCPOA negotiations and after the agreement went into effect. To fall for the same fairytale in pursuit of a “longer and stronger agreement,” as President Biden said, would be foolish.

Fifth, in 2015, the Iranian people hoped to benefit from the pallets of cash shipped to Iran by the Obama administration. They never did. Instead, they saw billions going straight to the Islamic Revolutionary Guard Corps (IRGC), the mullahs, and the regime’s terrorist proxies. Iranians won’t get fooled in 2021.

Sixth, the regime has lost any semblance of domestic legitimacy. The Iranian people have steadily become emboldened in their rejection of the forty-two-year Islamic revolutionary experiment. Their countrywide protests in November 2019, and the ensuing massacre of at least 1,500 people on the order of Ayatollah Khamenei, have caused an irreparable rift between the government and the governed. The current social media “No to the Islamic Republic” campaign is a further indication of the growing popular discontent.

While it was selling the original 2015 version of the nuclear deal, the Obama administration committed to “keeping in place other unilateral sanctions that relate to non-nuclear issues, such as support for terrorism and human rights abuses,” as well as sanctions on missile technologies and conventional weapons. 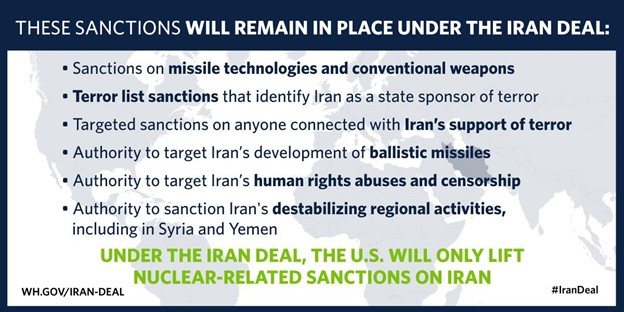 A graphic from the Obama White House archive

The 2021 version being negotiated by Malley reportedly includes the lifting of not just the Trump-era nuclear sanctions, but even those imposed on the Iranian regime for its terrorism and long-range missile development. Terror sanctions on the Central Bank of Iran, the National Iranian Oil Company, and the National Iranian Tanker Company—which have funneled billions of dollars to the Islamic Revolutionary Guard Corps, its Quds Force, and Hezbollah, the regime’s chief proxy—are also reportedly on the table. Providing billions in sanctions relief to terrorists responsible for the murder of hundreds of Americans, plus thousands of U.S. allies and Iranians, breaks President Barack Obama’s pledge and weakens U.S. national security.

Israel is America’s closest ally in the Middle East. It’s under attack from Hamas, Palestine Islamic Jihad (PIJ), and assorted other Palestinian terrorist groups—all supplied by their masters in Tehran with increasingly sophisticated rockets and drones. Hamas leader and U.S.-designated terrorist Ismail Haniya stated, “Iran has never hesitated to support the resistance and assist it financially, militarily, and technologically.” PIJ official Ramez Al-Halabi echoed Haniya in a May 7 interview, “The mujahideen in Gaza and Lebanon use Iranian weapons to strike the Zionists.”

According to recent reports, the Iranian regime provides $30 million per month to Hamas, and has historically supplied up to $100 million annually to Palestinian terrorist groups. The State Department’s comprehensive report on Iran’s belligerence estimates that “since 2012, Iran has spent over $16 billion propping up the Assad regime and supporting its other partners and proxies in Syria, Iraq, and Yemen.”

Given billions in sanctions relief, stemming from the Biden administration’s generous concessions in Vienna, it’s safe to assume that much of that bounty will end up arming Iran’s proxies and endangering U.S. allies across the Middle East. Biden and his team often emphasize the importance of strong alliances. Weakening America’s allies weakens its alliances, and that weakens U.S. national security. 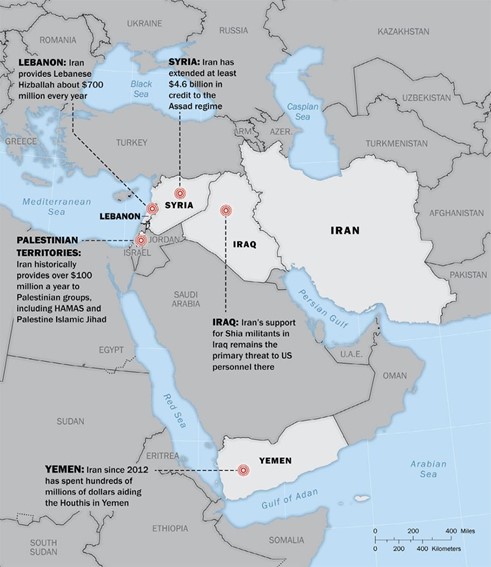 Map courtesy of the U.S. Department of State

The Islamic Republic of Iran was born of the original sin of taking fifty-two Americans hostage in 1979. During every decade since its founding, Iran’s regime has continued to transgress the International Convention Against the Taking of Hostages. Using Americans and other dual nationals as pawns to achieve Tehran’s political objectives has proven profitable. Hassan Abbasi, a senior IRGC strategist, admitted as much in January 2020: “Look how the IRGC generates income for its budget. We grab a spy, [Washington Post reporter] Jason Rezaian. America begs to get him back, but we say no, you have to pay for him. Then the government receives $1.7 billion in exchange for that spy. By catching a single spy, the IRGC earns the money that the government is supposed to allocate for it.”

True to form, reports from Vienna have referenced a possible exchange of American hostages (there are at least four currently held by the regime in Iran) for Iranian prisoners and the release of $7 billion in frozen funds. Another possibility involves the British government paying a £400 million ransom for British-Iranian citizens. As former U.S. hostage in Iran Xiyue Wang wrote, “For the safety and well-being of American citizens, and for the security and stability of the Middle East, the Biden administration should not authorize the release of any frozen Iranian assets to the Islamic Republic.”

The signals out of Vienna are not encouraging. U.S. Special Envoy for Iran Rob Malley has been hard at work dismantling the Trump administration’s historic leverage “so that Iran enjoys the benefits that it was supposed to enjoy under the deal.” No. That kind of a deal is a bad deal.

As the recent letter sent to Secretary of State Antony Blinken, signed by seventy Republicans and seventy Democrats across the political spectrum, outlined: “We must seek an agreement or set of agreements with Iran that are comprehensive in nature to address the full range of threats that Iran poses to the region,” including the regime’s nuclear program, ballistic missile program, and funding of terrorism. Iran must also release all hostages and political prisoners before any sanctions are lifted.