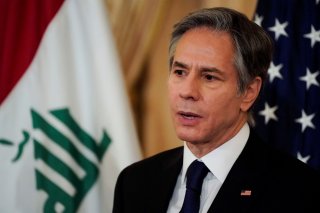 Proxies of Iran’s Islamic Revolutionary Guard Corps (IRGC) sent an exploding drone to assassinate the prime minister of Iraq, Mustafa al-Kadhimi, on Sunday morning, according to reporting by Reuters. Kadhimi survived. The U.S. State Department condemned “this apparent act of terrorism” but refused to name the perpetrator. If the Biden administration offers nothing more than this tepid response, one should expect Tehran to escalate its violent campaign to overturn the result of last month’s general election in Iraq, which resulted in a historic defeat for pro-Iran forces.

Of all the armies and militias in the Middle East, the one that uses explosive drones in its attacks the most is the IRGC and its proxy militias. Hence Iran’s fingerprints on the failed attempt to eliminate Kadhimi were too obvious to hide.

Tehran denounced the attack, but its real message for Iraqis was that a bloodbath awaits those who insist on forming a government that reflects the results of the October election.

Voters delivered a humiliating defeat last month for Iran’s Iraqi Shiite militias, whose bloc shrank from forty-eight to nineteen seats in Iraq’s 329-member parliament. Nationalist and anti-Tehran parties surged, but no coalition won a majority; Forming a government would be challenging even in the absence of Iranian threats.

Kadhimi did not run for election and has no bloc or constituency of his own, which makes the attempt to kill him an odd choice for Iran, at least at first glance. But it is exactly Kadhimi’s non-partisanship that has won him—and by extension the October 10 elections—immense credibility. That makes him a stumbling block in the way of Tehran’s efforts to annul the results.

Iran’s methods in Iraq come straight out of its playbook for Lebanon, where Tehran employed Hezbollah to reverse the verdict at the polls. An anti-Iran coalition prevailed in Lebanon in 2005 and 2009, but Hezbollah militias that operate outside the law repeatedly shut down the government. Facing coercion, the Lebanese Parliament approved Hezbollah’s preferred candidate for president as well as changes to electoral law that eventually allowed the party to prevail in the 2018 election.

Behind a democratic façade, Hezbollah now calls the shots in Beirut. Over the past few weeks, for example, the party has forced Lebanon’s cabinet to suspend its meetings because the cabinet will not dismiss the judge investigating a massive explosion last year at the Beirut Port.

Tehran’s proxies in Iraq are also trying to shut down the state. In early November, militias held a sit-in in Baghdad in protest of the election results. When their protest went unnoticed, protesters affiliated with the militias tried to swarm the Green Zone, a heavily protected area that houses the residences of top Iraqi officials and the U.S. Embassy.

Facing an advancing mob, security forces opened fire and killed at least one individual. The mob retreated, but Iran escalated by ordering the attempt on Kadhimi’s life.

Iran and its proxies are now trying to deflect blame for the failed assassination attempt. Saeed Khatibzadeh, the spokesman of Iran’s Foreign Ministry, condemned the attack and warned of “security conspiracies.” Qais al-Khazaali, chief of the pro-Iran militia Asaib Ahl Al-Haq, said that because no one was killed, a committee should be formed to investigate the attack and make sure that it was not an accidental explosion.

Khazaali, like Khatibzadeh, also warned of a foreign conspiracy to start a civil war.

Former Prime Minister Nouri al-Maliki, the only one of Iran’s allies whose bloc performed well in the October elections, taking thirty seats, reiterated the claim that “the enemies of Iraq” were trying to start a civil war.

Instead of promising to help Baghdad bring the perpetrators to justice, the Biden administration only offered assistance in investigating the attack. This signal of a tame response will likely persuade Iran that it has nothing to lose by ordering its militias to engage in more violence. Tehran’s goal will be to annul the results of the election, if not officially, at least practically through the formation of a militia-friendly cabinet.

Iraq is not a lost cause, however, and has advantages compared to Lebanon. First of all, it is simply much bigger and would be harder for Iran to digest. The Shiite, Sunni, Kurdish, and independents who did well in last month’s elections recognize the severity of the problem and vowed to disband the militias. Most importantly, this multi-ethnic, multi-sectarian coalition enjoys the full support of Grand Ayatollah Ali al-Sistani, the top Shiite religious authority in the world, based in the southern Iraqi city of Najaf.

If Washington and the West stand behind the anti-Iran coalition, it might be able to overcome Tehran and disband its troublemaking militias.

Hussain Abdul-Hussain is a research fellow at the Foundation for Defense of Democracies (FDD, a Washington, DC-based, nonpartisan research institute focusing on national security and foreign policy. He Tweets @hahussain.