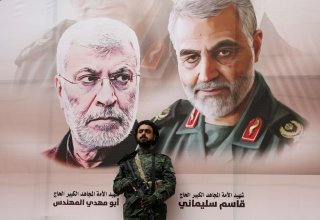 On January 24, 2022, the United Arab Emirates (UAE) and U.S. forces said they jointly intercepted two ballistic missiles targeting the Gulf state’s capital, Abu Dhabi. This is the latest attack by Houthi rebels to threaten the UAE’s reputation as a secure hub for international businesses in the Middle East and to widen Yemen’s years-long civil war.

The attack marked a sharp escalation in tensions as it was the second in a week aimed at the UAE, which is part of the Saudi-led coalition that has been at war with the Iran-backed Houthi rebels in Yemen for years. Though the Houthis frequently target Saudi Arabia, which borders Yemen, strikes aimed at the Emirates, which has long been considered a safe haven in a tumultuous region, had been rare until recently, as have American interventions like the one on Monday.

These incidents are only the latest in a series of deadly and provocative assaults launched by the Houthis—a series that includes last fall’s bombing of a humanitarian aid warehouse in the Yemeni port city of Mocha, the seizure earlier this month of an Emirati-flagged vessel carrying medical supplies in the Red Sea, and multiple drone and missile attacks on oil refineries and other targets in Saudi Arabia.

It is evident that the Houthi rebels continue to reject good faith efforts to negotiate a diplomatic solution, instead choosing the path of violence, including against civilians and civilian targets.

The combination of Iranian diplomatic action on one hand and Iranian-backed violence—in Iraq, in Yemen, and elsewhere—is not a surprise. In the broader context of the regime's bloated vision of itself as a global power player.

The Houthis very clearly meet all legal criteria for designation. They are a foreign organization that engages in terrorist activity that threatens U.S. interests. They have fired missiles at civilian airports on numerous occasions, targeted civilian energy infrastructure, and threatened international shipping. Additionally, in late 2021, they stormed the U.S. Embassy compound in Sana’a and imprisoned several U.S. locally employed staff. Further, it is well established that the Houthis receive training, support, and financial backing from Iran’s Islamic Revolutionary Guard Corps, which is itself a designated FTO. Revoking the designation of the Houthis without any material change in their behavior, as was done previously, undermines the credibility of this important foreign policy tool.

The United States must use every available tool to increase pressure on the Houthi militants, who have done nearly everything in their power to undermine the peace process in Yemen.

Efforts by Washington to show what is at stake and devise new means to deliver humanitarian assistance, even as the Houthis are relisted as a terrorist organization, send a clear message to Tehran. Support for this step should be built on both sides of the aisle in Congress.

The United States has now given more than $3.4 billion in humanitarian assistance to Yemen since the conflict began in 2015. This assistance will save many lives, but the truth is that no amount of aid will durably improve conditions until Yemen’s conflict ends. Blocking access to key weapons and technology from Iran, however, might increase the incentives for the Houthis to come to the negotiating table in good faith.

To accomplish this, the U.S. Defense Department should position sufficient military resources in the region and provide commanders with clear instructions to prioritize the interdiction effort.

Ahmed Charai is a Publisher of The Jerusalem Strategic Tribune. He is on the board of directors of many Think-Tanks including the Atlantic Council, Center for Strategic and International Studies, Foreign Policy Research Institute, and Center for the National Interest.

Image: A Houthi militant stands by a billboard with posters of Iraqi militia commander Abu Mahdi al-Muhandis and Iranian military commander Qassem Soleimani during a rally by Houthi supporters to denounce the U.S. killing of both commanders, in Sanaa, Yemen January 6, 2020. Reuters/Khaled Abdullah.