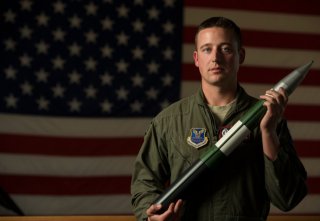 Nearly 700 scientists and engineers, some of them Nobel laureates, have written a letter to President Joe Biden urging the United States to adopt four new nuclear policies. The letter asks that the United States and the president pledge not to use nuclear weapons first; receive approval from another senior U.S. government official before using nuclear weapons; unilaterally reduce its deployed nuclear weapons by one-third, from 1550 to 1,000; and stop funding a new land-based missile to replace the current Minuteman III intercontinental ballistic missile (ICBM) force that was deployed in 1970. These steps, the authors say, “will slow the spiraling nuclear arms race with Russia and China” and advance “steps towards disarmament” by making arms control negotiations more credible.

There are four serious flaws in the proposal. Such a policy would allow Russian and Chinese nuclear forces to remain in a sanctuary free from attack. It would also allow China and Russia to attack the United States or its allies with a High-Altitude Electromagnetic Pulse (EMP), cyber, or chemical/biological attack—all capable of killing tens of millions of Americans—without fear of nuclear retaliation. Even worse, it would give the United States’ nuclear-armed adversaries an incentive to get in the first nuclear punch, especially if the United States and its allies came to rely upon our adversaries’ similar pledge not to use nuclear weapons first.

The second idea is equally worrisome but also unnecessary. Every nuclear crisis faced by a U.S. president, whether President John Kennedy over Belin or Cuba, President Richard Nixon in the Middle East war between Egypt and Israel, or President Ronald Reagan over Soviet fears that a military exercise was a prelude to an attack, has involved the U.S. president asking his closest advisers and national security officials for their best advice.

Each president relied upon different high-ranking officials. The idea that the president needs an affirmative vote from a senior U.S. official makes no sense. What if the vote is contrary to what the president wants to do? Given the constraints already inherent in a crisis, why would we encumber the president with more obstacles to necessary action, whatever that action may be? And furthermore, is the president’s authority to be changed by law? And who enforces this new law? Would it prevent necessary action from being taken? The idea is without merit and dangerous.

But it is the third idea that really is reckless. Unilaterally reducing U.S. strategic nuclear weapons to less than 1,000 and eliminating ICBMs also eliminates the ability of the United States to maintain a hedge if it might suddenly be required to build up beyond the 1,550 nuclear weapons allowed by the New START Treaty. Every president that has endorsed an arms control agreement has also endorsed a central capability of having a hedge or responsive capability to build up in the case of a strategic environment deteriorating.

With only 192 sea-launched ballistic missiles and zero land-based ICBMs, the maximum number of missile warheads the United States could deploy is 1,536—192 missiles each with eight warheads. Adding in the allowed sixty bombers, this number is just marginally above the current level allowed by the New START Treaty. This compares to Russian and Chinese strategic nuclear forces that could easily exceed 5,000 warheads over the next decade under a breakout scenario—or upwards of at least over 3,000 even if in compliance with current arms deals. What is the point of a strategic “balance” that is weighted three or five to one against the United States?

As for the idea of temporarily keeping the Minuteman III around, these ICBMs cannot be given an affordable or effective service life extension program as official U.S. Air Force analysis has proven. The Minuteman III has already gone through a number of life extensions and cannot last longer than 2035 without a $75 billion upgrade, assuming such an upgrade is technically doable. Each year brings more Minuteman technology that needs replacement, and which is no longer even manufactured. After all, the design is fifty-two years old.

Further, a Minuteman III missile service life extension does not enable an ability to overcome adversary missile defenses, cannot be reliably sustained, and will, in fact, cost $38 billion more than the Ground-Based Strategic Deployment (GBSD) that is slated to replace it.

It is true that Minuteman III is already planned to be sustained through 2035, another fifteen years. Those plans are already part of the program of record to allow the finely tuned replacement starting in roughly 2029, with the GBSD land-based missile. The Minuteman III technically will not meet the deterrent requirements as certified by the United States Strategic Command.

It is also completely unfounded that senior U.S. military officials concurred that the United States could unilaterally reduce its nuclear forces to less than 1,000 warheads and still maintain deterrence against Russia even if Russia maintained the higher New START level of forces.

I have spoken with each of the commanders of U.S. nuclear forces since 2010 when the treaty was signed, and they all have declared they do not and have not supported such a cut of U.S. warhead force levels. For the record, as the National Institute of Public Policy has illustrated in a recent assessment, no unilateral reductions of nuclear forces by the United States have ever resulted in reciprocal Russian behavior. Former senior Office of Secretary of Defense and National Nuclear Security Administration official John Harvey says no such cuts would be endorsed by U.S. military officials unless verified, equal reductions by Russia were also mandated by treaty.

As for an arms race, the United States has no modernized nuclear forces now deployed—the first deployment does not start until 2029. Today, some new U.S. platforms have been built and are being tested, but are years away from deployment. By comparison, Russia recently announced its nuclear forces are 86-91 percent modernized with twenty-three new types of strategic nuclear forces developed or deployed since 2010. The claim that the United States is leading an arms race is thus nothing short of ludicrous.

As for unilaterally giving up U.S. land-based ICBMs, China and Russia are both building a combined five new land-based ICBMs, including China’s more than 350 new ICBM silos. Apparently, new Chinese ICBMs are fine, but U.S. ICBMs destabilizing. Opponents of U.S. ICBMs have even declared that China has a strategy to ensure the survivability of its silo-based ICBM systems—Beijing would launch first! Gen. John Hyten, the just-retired vice chairman of the Joint Chiefs of Staff, stated that in his view the silo-based ICBMs in China are indeed first-strike weapons.

In that case, the ICBMs the United States maintains would be fully available for retaliation in a measured and considered action. The entire basis for the United States having a nuclear triad is that the United States has sufficient retaliatory capability to continue to deter Russia even if it rides out an attack and loses some of its ICBM forces.

The letter’s writers also advocate against having U.S. ICBMs on alert. In 1979 and 1980 there were false warnings of a Soviet sea and land missile attack. This was due to a computer chip malfunction when the United States was in the midst of using a training tape. The glitch was soon corrected and has not occurred since. The president was not notified of the false warning and a launch conference was not convened. In fact, the strategic environment has been so stable that for the entire seventy years of the nuclear age no launch conference has ever been convened to determine whether a missile launch somewhere on earth is headed toward the United States. That is certainly proof positive that the nuclear triad, with its land-based missiles, is indeed the most valuable U.S. deterrent capability we have.

Peter Huessy is President of Geostrategic Analysis of Potomac, Maryland.