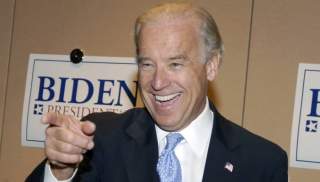 “In a room where people unanimously maintain a conspiracy of silence, one word of truth sounds like a pistol shot.” So said Polish defector and poet Czeslaw Milosz when accepting the Nobel Prize in Literature in 1980. The conspiracy of silence around the Gulf States’ links to extremism in Syria hasn’t been unanimous. But there were still many ears ringing after Vice President Joe Biden fired off at Harvard last Thursday. Biden stated that “[his] constant cry was that our biggest problem is our allies—our allies in the region were our largest problem in Syria.” This was because “they were so determined to take down Assad and essentially have a proxy Sunni-Shia war...[that] they poured hundreds of millions of dollars and tens, thousands of tons of weapons into anyone who would fight against Assad—except that the people who were being supplied were al Nusra and al Qaeda and the extremist elements of jihadis coming from other parts of the world.”  Biden even said that Turkish president Recep Tayyip Erdogan had admitted to him that Ankara “let too many [fighters]” enter Syria.

Erdogan and the Gulf States were furious, and Biden spent the rest of the weekend apologizing for his remarks, which were foolish and a diplomatic disaster. And this was hardly Biden’s first apology tour. He’s talked himself and his boss into trouble many times before.

But, as with so many of Biden’s other putative gaffes, the real problem was that he had said something that was true. In this case, Biden probably didn’t go far enough. Qatar, for example, has been a nexus of support for Islamism of all stripes, extreme and less so. Al Jazeera’s Arabic networks became virtual mouthpieces for the Muslim Brotherhood in Egypt during the coup there last year; this year, they showered favorable coverage on Hamas and Palestinian Islamic Jihad, even borrowing Hamas hashtags on social media. Members of Qatar’s royal family have, according to the Washington Institute’s Lori Plotkin Boghardt, hosted Osama bin Laden, sheltered 9/11 mastermind Khalid Sheikh Mohammad and provided extensive support to Al Qaeda in Iraq and its bloodthirsty leader, Abu Musab al-Zarqawi. At a less official level, Qataris have also been heavily involved in financing the official Al Qaeda affiliate in Syria, the Al Nusra Front, including its kidnapping of American journalist James Foley, who was later murdered by the Islamic State, another alleged beneficiary of Qatari generosity.

Turkey, meanwhile, has been the premier destination for those looking to sneak into the Islamic State, with wounded IS fighters reportedly even recuperating in Turkish hospitals. The extensive web of IS safehouses and recruiters inside Turkey has likely compromised Ankara’s ability to act seriously against the black-bannered barbarians. And Saudi Arabia and the Emirates have long appeared to favor anti-Assad fervor over other criteria when vetting Syrian rebel groups.

So Biden was spot on. But he’d have done well to mention some other things, too, if he’s getting into the business of airing dirty laundry about the Islamic State. The United States has been far too reticent, for example, in noting the dangerously large role that Iran and its Shia proxy militias have acquired in Iraq. (The quiet strategy does seem to have achieved one success: the leader of the head-drilling Badr Brigade has so far been stymied in his quest to recapture the Iraqi interior ministry for his organization.) Do we intend to sit by as Baghdad slowly becomes an Iranian satrapy?

Washington is also not innocent in the Syrian crisis. It is unfair to blame the Obama administration for Syria’s descent into chaos or for our friends’ dubious friends. The first was beyond our control and certainly beyond our political will; the second issue long predates the current administration. Yet several of Obama and Biden’s moves helped shift the international balance away from settlement and toward chaos. Our longstanding refusal to countenance an Iranian presence in talks about Syria’s future, for example, ignores Tehran’s growing influence there. The Islamic Republic has a veto on Syrian peace; failing to recognize that unfortunate reality just puts success even further out of reach.

But the administration’s August 2011 announcement that “the time has come” for Syrian president Bashar al Assad “to step aside” will be remembered as one of its greatest errors. As TNI publisher Dimitri K. Simes noted in September, this “gave a false encouragement to the opposition and...led neighboring states, particularly Turkey, to support the insurgency.” It also complicated negotiations: “After all, why should the opposition support a settlement if no less than the President of the United States announces that Assad’s removal is imminent and inevitable?” So Biden’s charge that the Gulf States were driven to error by their eagerness to take down Assad is rather rich. Despite more than three years without success, the administration is sticking by its insistence that Assad must go. Perhaps Barack Obama could stand to learn from his vice president's apologies: When you make a mistake, you own up to it.