Blame It on Lenin: What Putin Gets Wrong About Ukraine 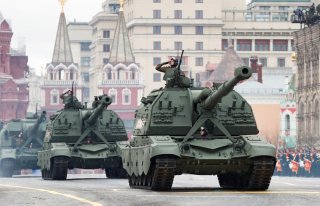 In his nearly hour-long televised address made on February 21, Russian president Vladimir Putin vilified the Ukrainian government for being, in his view, completely illegitimate and incompetent. The Ukrainian government and the oligarchs behind it, Putin asserted, have squandered the resources they inherited from the Soviet Union, came to be tools of the West, have persecuted Ukraine’s Russian population, and are even planning to acquire nuclear weapons to threaten Russia. But Putin placed special blame on Soviet revolutionary leader Vladimir Lenin for having unnecessarily created Ukraine in the first place.

Putin stated early on in his address that, “modern Ukraine was entirely created by Russia or, to be more precise, by Bolshevik, Communist Russia. This process started practically right after the 1917 revolution, and Lenin and his associates did it in a way that was extremely harsh on Russia – by separating, severing what is historically Russian land. Nobody asked the millions of people living there what they thought.”

Putin himself asked why Lenin did this: “What was the point of transferring to the newly, often arbitrarily formed administrative units – the union republics – vast territories that had nothing to do with them?” Putin then proceeded to answer this and similar questions that he raised: “There is an explanation. After the revolution, the Bolsheviks’ main goal was to stay in power at all costs, absolutely at all costs. They did everything for this purpose,” including satisfying “any demands and wishes of the nationalists within the country.” As a result, “Soviet Ukraine is the result of the Bolsheviks’ policy and can be rightfully called ‘Vladimir Lenin’s Ukraine.’ He was its creator and architect.” While Josef Stalin eliminated any degree of independence acquired by Ukraine or any other constituent republic of the Soviet Union (all of which were ethnically based), he left the federal structure in place, and it was these “union republics” which became independent when the Soviet Union broke up. Further, they inherited the borders that the Soviets had drawn and redrawn between them even though they included within some of them, such as Ukraine, large numbers of ethnic Russians.

According to Putin, Ukraine has been part of Russia for centuries, but the artificial creation of the Ukrainian Soviet Socialist Republic and the subsequent breakup of the USSR in 1991 led to the historical mistake of Ukraine becoming an independent state when, he claimed, it had never been one historically.

Putin, though, did not provide a full account of why Lenin created ethnic republics inside the new post-Soviet revolutionary state that arose from the collapse of the Tsarist Empire. In fact, Lenin did this to try to resolve a problem that still confronts Russia. The Tsarist Empire was, as Lenin put it, “the prison house of nations.” While Britain, France, and other West European states focused on building overseas colonial empires, Tsarist Russia built an overland colonial empire which consisted of territory occupied by Russians and a vast array of other groups including Finns, Estonians, Latvians, and Lithuanians in the northwest, Orthodox Christian but non-Slavic Georgians and Armenians in the South Caucasus, and an array of mainly Turkic speaking Muslim nations such as the Tatars in the heart of Russia, Chechens in the North Caucasus, Azeris in the South Caucasus, and several different groups in Central Asia. Further, nationalism had awoken in varying degrees among these groups—as it did among many others in Europe and elsewhere—over the course of the nineteenth century. Because they were also Slavic, mainly Orthodox Christian, and spoke languages similar to Russian (some insist that they are really Russian dialects), Russians saw Ukrainians and Belarusians as also being Russian. But many Ukrainians came to see themselves as a separate nation.

When the Tsarist Empire broke up in 1917-1918 during World War I, the harsh treatment non-Russians had received under Tsarist rule contributed to their desire to become independent. The problem Lenin had to deal with at the time was that, while he himself had promised independence to non-Russians from the “prison house of nations” when he was a revolutionary seeking the downfall of the Tsar, once he himself was in power he very much wanted to keep as much of the Tsarist Empire as he could intact. The Red Army initially recaptured much though not all of the non-Russian regions that had been lost to Russia at the end of World War I. But Lenin understood that nationalism could lead to their seeking independence later. His solution, then, was to try to forestall this by creating ethnically based “republics” ruled by communists mainly from that ethnicity and where the language of that region would, unlike in Tsarist times, be allowed to flourish.

In other words, Lenin sought to forestall the breakup of the Russian empire by making enough concessions to the non-Russian “colonies” within it motivating a willingness—or at least a tolerance—on the part of non-Russian communists and others residing in them to voluntarily remain within an empire formerly acquired and maintained by force. And Lenin was partially successful at this: the empire was still held together partly by force, but partly through non-Russian communists seeing it as being in their interests to remain a part of the union before Stalin came to full power. But, as Putin noted, Stalin instituted draconian rule throughout the Soviet Union, including in both Russia and the non-Russian republics.

What Putin did not mention was that after Stalin’s death, both Nikita Khrushchev and Leonid Brezhnev allowed non-Russian communists a larger and larger role in running their own republics. In other words, it was not just Lenin who felt the need to make some concessions to non-Russians, especially the communists among them.

Still, the memory of Stalin’s extremely harsh rule, the freedom of the press Mikhail Gorbachev allowed which helped revive those memories, and the desire for independence and aversion to “foreign” rule (which was affecting so many nations without their own states) led to the rise of non-Russian nationalisms not just among non-Russian ethnic groups, but even within their non-Russian communist parties. Prior to the breakup of the USSR, it was Boris Yeltsin—then president of the USSR’s largest constituent republic, Russia—who helped them achieve their aspirations by agreeing with the leaders of Ukraine and Belarus to dissolve the Soviet Union in December 1991, thus depriving Gorbachev of a job, and making Yeltsin the leader of the most important post-Soviet state. Yeltsin, though, also seemed to understand that trying to keep the non-Russians (at least, those within the fourteen former non-Russian union republics) forcibly under Moscow’s rule would be an endless struggle, and so it was better to let them go (even if he wasn’t willing to let Chechnya and other Muslim regions inside the Russian republic become independent).

Despite his expressions of sorrow over the breakup of the USSR, Putin does not seem focused—at least for now—on reacquiring the non-Slavic parts of it (though there is concern in Kazakhstan about whether he wants to regain the northern part of the country where there is a large Russian population). Putin, however, sees the two Slavic non-Russian republics—Belarus and Ukraine—as truly artificial creations which rightfully belong to Russia. Belarus’ authoritarian president, Alexander Lukashenko, was often at odds with the West, but sought to balance between it and Russia. He lost this ability, though, when he had to turn to Russia for support against the democratic opposition that rose up against him in 2020-2021 and became totally dependent on Putin. Since the breakup of the USSR, though, Ukraine has vacillated between first, two generally pro-Russian presidents, then a pro-Western one, then a pro-Russian one, and two pro-Western ones since 2014. And Putin has made clear that, for him, Ukraine is rightfully part of Russia, Ukrainians are really Russians, and Ukrainians who assert the contrary are utterly illegitimate.

Putin, though, cannot escape the problem that Lenin himself had to deal with of how to reconcile non-Russians to being ruled by Russia. The forceful imposition of Russian rule in part—much less all—of Ukraine will not bring about such a reconciliation. For even if Ukrainians cannot resist the forceful imposition of Russian rule over part or all of Ukraine now, Putin’s success in imposing it is only likely to intensify feelings of Ukrainian nationalism and lead it to burst forth again whenever the opportunity arises. Like Putin, Lenin was no democrat. Like Putin, Lenin wanted to restore control over lost parts of the empire. Instead of blaming Lenin then, Putin would do well to draw lessons from Lenin’s realization that a more accommodative approach toward Ukrainian nationalism would better serve Russia’s long-term interests.

Mark N. Katz is a professor of government and politics at George Mason University, and a nonresident senior fellow at the Atlantic Council.