Is Boris Johnson’s Resignation a Blow to Ukraine? 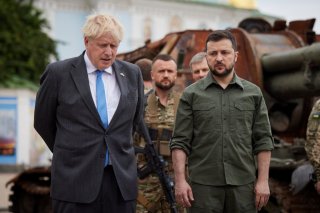 British prime minister Boris Johnson has announced his resignation, rattling Kyiv and delighting Moscow as the West struggles to maintain a united front five months into the Ukraine War.

“We all heard this news [of Johnson’s resignation] with sadness,” Ukrainian president Volodymyr Zelenskyy said in a statement. “Not only me, but also the entire Ukrainian society, which is very sympathetic to you. We have no doubt that Great Britain’s support will be preserved, but your personal leadership and charisma made it special.”

Johnson has been lionized in Ukraine, where he consistently ranks as the most favorably-viewed politician behind Zelenskyy. Kyiv officials up to and including the Ukrainian president openly rejoiced after Johnson survived a no-confidence vote in early June. Towns and villages across the country have unveiled Boris Johnson streets, a Kyiv bakery is offering Boris Johnson croissants, and there have been paintings by Ukrainian artists of Boris Johnson—affectionately Ukrainized as “Borys Johnsoniuk”—dressed in traditional Ukrainian garb and draped in the Ukrainian flag.

The British prime minister has become the face of the West’s maximum-pressure campaign against Russia in the wake of its invasion of Ukraine, vowing in the opening days of the conflict to fight for as long as it takes to cripple Russia’s economy with successive waves of sanctions.

Johnson was among the most principled and forceful Western proponents of the idea that a prospective peace deal to end the war should never come at the expense of Ukrainian territorial concessions. “My message to my colleagues in the G7 and, in particular, in NATO, will sound like this: ‘Now is not the time to agree and encourage Ukrainians to go to a bad peace, a peace for which they are offered to give up part of their territory in exchange for a ceasefire,” he said in June. Johnson, who plans to remain in his post until a successor is chosen, told Zelenskyy as recently as July that Ukraine can recapture territory currently occupied by Russia.

But Johnson’s sustained enthusiasm for the Ukrainian war effort is increasingly not being matched by the other major players in the Western coalition arrayed against Russia. French president Emmanuel Macron was not nearly as unequivocal as his British counterpart when asked during a June press conference what concessions Kyiv should consider as part of a negotiated settlement with Russia, telling reporters “this is up to Ukraine to decide.” German chancellor Olaf Scholz had to be pressured by Kyiv and several Western governments into providing Ukraine with substantial military support; as many as 47 percent of Germans believe that Ukraine should cede territories in the country’s east in order to strike a peace deal with Russia, according to recent polling. As reported by the Washington Post, an opinion poll conducted in ten European countries last month found that “those who want the war to end as soon as possible outnumber those who seek to punish Russia.”

Moscow predictably celebrated Johnson’s downfall. “The clown is going,” said Vyacheslav Volodin, speaker of Russia’s lower house of parliament, according to Reuters. “He is one of the main ideologues of the war against Russia until the last Ukrainian. European leaders should think about where such a policy leads.” Russian Foreign Ministry spokeswoman Maria Zakharova offered a similar sentiment: “The moral of the story is: do not seek to destroy Russia. Russia cannot be destroyed. You can break your teeth on it—and then choke on them.” Nevertheless, there are no illusions among Russian politicians and political commentators that Johnson’s departure will prompt a sudden sea change in British policy regarding the Ukraine War. U.S. National Security Council strategic communications coordinator John Kirby told Fox News that the resignation will have no effect on Western support for Ukraine. “Every leader at NATO and every leader at the G-7 [Group of Seven] said they were going to continue to support Ukraine for as long as it takes,” he said.

Johnson has promised that the United Kingdom’s support to Ukraine will continue after his departure. There is, however, no implicit guarantee that Johnson’s successor will share his unwavering personal commitment and genuine passion for the Ukrainian national idea. They will not necessarily inherit Johnson’s increasingly unrealistic vow to collapse Russia’s economy. Nor will they be bound by his position that Ukrainian territorial concessions should never be considered under any circumstances, no matter how long the war drags on and how dire the situation on the ground looks for Ukraine’s armed forces.

There will likely be nothing approaching a hard reset in Britain’s Russia-Ukraine policy, but, depending on who Johnson’s successor is, there may be a window for a subtle recalibration in London’s messaging regarding the feasibility and terms of a negotiated settlement in Ukraine.