Can Britain Turn Bosnia Away from Secessionism? 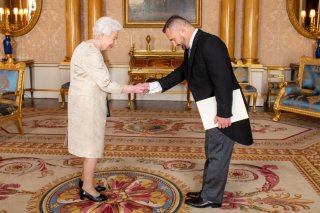 Following the decision of former High Representative Valentin Inzko to impose a ban on genocide and war crimes denial, officials from the entity Republika Srpska (RS), led by Milorad Dodik, have initiated a number of processes that are secession in all but name and would lead to the final disintegration of the country. The decision adopted in the RS National Assembly announcing the RS's intention to withdraw itself from the central government and its judicial, customs, and security institutions, as well as its wish to leave Bosnia and Herzegovina’s (BiH) armed forces and create an independent RS army carries a grave risk of violent confrontation and renewed conflict. It’s a part of a wider assault on the international order that is supported by Serbia and Russia and built on the premise of ethnically homogenous territories thinly veiled as “Srpski svet”—a call for the unification of all Serbs in the Balkans.

In doing so, Dodik is supported and fully aligned with Russia. As in Ukraine, Moscow sees the region of Western Balkans as a part of a greater geopolitical chessboard in which it can draw moves that will weaken the Western support for BiH, and continuously impair the will to build proper independent statehood. This strategy of undermining Bosnia’s stability, with the goal of keeping it out of NATO and the Euro-Atlantic sphere is no longer just a hybrid threat—the Russians were clear they will react if something like this is to happen. A new Transnistria in the Balkans with the help of secessionist forces in RS is widely attractive for Russian president Vladimir Putin; it offers a tool for leverage in the region and the continent.

In Dodik’s assault on constitutional order and territorial integrity, the International Community has had different approaches. Certain countries, such as the Netherlands, have led with principle within the EU. The Dutch parliament officially adopted a resolution calling for sanctions to Dodik and his clique. Even more notably, in what amounts to a significant policy change in Berlin, German foreign secretary Heiko Mass has been rather blunt, stating “unacceptable” behavior, and also calling to suspend funds to the RS. EU minister of parliament (MP) Tineke Strik visited Sarajevo and then led a debate in the European Parliament, calling for the EU to sanction Dodik. Her op-ed correctly identified that negotiating with autocrats will only set a bad precedent for the future.

Unfortunately, the EU seems more predisposed to negotiating with autocrats and those who wish to dismantle twenty-six years of fragile peace. Just a handful of countries are actually in favor of unified EU sanctions. On the other hand, the EU-U.S. willingness to bully pro-democratic forces in BiH through a recent initiative to adopt an unconstructive electoral reform will only further underline ethnic divisions. Such measures threaten to dissolve the country. Conceding to segregationist factions such as the Croatian Democratic Union party (HDZ) and appeasing Dodik’s secessionist ambitions will lead neither to long-term stability nor prosperity. These “quick-fix” solutions will only end up further eroding the EU and U.S. credibility in Bosnia and Herzegovina.

Instead of first dealing with those who are the source of the crisis, and then looking for sustainable long-term Constitutional reform solutions, the currently proposed changes would permanently cement the ethnonational principle of ethnic clans, and would de facto legitimize apartheid. They are also in conflict with European Court of Human Rights (ECtHR) judgments, and more importantly, are not the standard of any democratic society anywhere else in the world—not in Europe or the United States.

Historically, the British role in Balkans has not been significant—positive or negative. However, in a span of a few weeks, the United Kingdom has produced a series of initiatives that has reframed the conversation around its role in the country.

In the past week only, there have been a number of interventions of MPs in the House of Commons, led by Alicia Kearns, offering solutions for the ongoing political crisis. Moreover, while Dodik, Russia, and China have completely refused to recognize Christian Schmidt as the new High Representative, Schmidt was invited to London and received support for his mandate, including the use of Bonn Powers. Furthermore, two UK ministers visited Sarajevo to mark BiH Armed Forces Day and deepen bilateral relations. Their joint statement called for the continuation of support to BiH’s vital national institutions, further Euro-Atlantic integration, and a pledge for an enduring commitment to peace and security in BiH and Western Balkans.

In addition, Foreign Secretary Liz Truss has put Bosnia and Herzegovina at NATO Ministerial meeting in Riga and warned Putin that the UK would support stability in the Western Balkans. Her predecessor William Hague wrote a scathing piece calling for renewed support through NATO troops in Bosnia and sanctions for those who undermine the Dayton Peace Accords that ended the Bosnian War and serve as the foundation for BiH’s multi-ethnic power structure.

Finally, to buttress stability and security in the region, the UK announced Sir Stuart Peach as the new Special Envoy for the Western Balkans. Sir Peach, a seasoned defense and intelligence professional, will have broad powers to work within strengthening regional stability. This appointment showcases that Whitehall understands correctly the region through a security prism, which directly links regional stability with continental, and democratic backsliding with foreign malign interference. As MP Kearns stated, “Dodik must learn that Bosnia also has friends, with none more committed than the United Kingdom.”

Yet, while the UK’s support for BiH has been an unexpected and powerful display of solidarity, more concrete action remains to be seen. There are several other hard and soft power measures that could be adopted by the United States, United Kingdom, and other transatlantic partners to put the region and BiH back on the Euroatlantic path:

In my talks with various Western officials, skepticism rose regarding the effectiveness of sanctions against Dodik, as well as the possibility of further escalation. This is a false premise. Dodik’s actions will continue as long as the international community continues its policy of appeasement.

Sanctions should fall into two categories: individual sanctions and economic (sectoral) sanctions. Sectoral sanctions, primarily through the banking and finance sector should fully block RS entity banks and investment agencies. Borrowing, such as the €350 million at London Stock Exchange to cover RS budget deficit needs to be off-limits. More so, as RS exports seventy-six percent of its products to the EU, a ban on imports from transatlantic partner countries in Europe will deal significant damage to RS economic growth.

The United States’s individual sanctions against Dodik should be broadened. The UK should follow the lead on the European side of the Atlantic by targeting individuals, including high-ranked officials, businessmen, and Dodik’s circle of corrupt cronies. If the EU refuses to impose uniform sanctions, then the United States and UK should seek support from Canada and select a few European countries to act unilaterally.

The West must opt to reverse the “reserve status” in EUFOR Althea peacekeeping mission and instead deploy U.S. and UK battalions to strategic points in Bosnia (city of Brčko, Tuzla, and Sarajevo). This should be accompanied by an increased number of support personnel to NATO headquarters in Sarajevo.

Additionally, to cement military presence through a UK military base in Bosnia makes it clear to Russia’s ambitions that Britain is permanently interested in this area and its peace and security.

The West should continue and extend hard-power support by engaging with only legal & legitimate forces, the Armed Forces BiH, on modernization of defense and deterrence capacities and military infrastructure rebuilding. This should further advance the country’s readiness for NATO integration. The arrival of new Huey II helicopters is the result of a strategic partnership between the United States and BiH, and the UK should also follow with its own strategy of military relationship upgrade, with the support of NATO Quint (the United States, UK, France, Germany, and Italy).

The pro-BiH parliamentarians in U.S. Congress, UK parliament, and EU parliament should form official working groups and caucuses in their respective national legislatures that will work in identifying appropriate measures in times of crisis. The goal should also be to open a long-term democratic and principled dialogue with government and non-governmental actors in BiH (civilian elites, academicians, youth activists, and leaders) in producing a Dayton 2 constitution led by the idea of a civic state with full respect for individual and collective rights as is the case in the majority of modern European democracies.

The West should continue its soft-power support by establishing a Center of Excellence in Sarajevo that will work on strengthening the democratic resilience of vital national institutions, counter hybrid threats, cyber security attacks, disinformation campaigns, and conflict prevention. This should be led by NATO QUINT countries with the support of local professionals.

Intensifying activities on the push for energy diversification in Bosnia and gas independence from Russia is crucial. Gas has been increasingly used in achieving political gains through coercive economic means and is a Russian strategic-level effort to influence the geostrategic position of the BiH by weaponizing interdependence.

To discourage the continuous erosion of democratic principles and maintain peace and security in BiH requires a constructive, values-driven approach. As time goes by, the fuel for RS separatism will always present an existential threat to Bosnia.