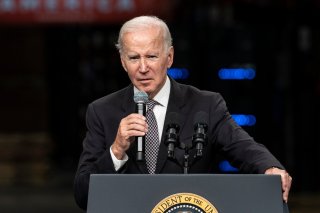 The controversy caused by the discovery of top-secret documents at the home, garages, and university offices used by President Joe Biden, following on the heels of an FBI raid on the home of former President Donald Trump, is legitimate. American justice acts independently of who is being investigated. This equal justice underlines that the rule of law is supreme, no matter which party is in power. This is how democracy ought to work.

However, this case, despite its legal and political freight, should not distract our attention from the real threats facing the United States and the global order of liberal states.

The first of these challenges is surely climate change. It is literally an existential threat to the whole world.

Biden pledged to reduce U.S. greenhouse gas emissions by at least 50 percent by 2030. He also announced plans to spend $2.3 billion to build electric infrastructure strong enough to survive the warming climate and its projected increase in violent storms, surging floods, and rising seas. The president’s decision to create an international fund to help poor countries fight the effects of climate change, which they did little to cause but will suffer disproportionately from, is fair.

This could also benefit rich countries since it will reduce the waves of expected climate refugees, which Al Gore estimates in the tens of millions per year. Such a human tidal wave would swamp or sink even the largest nations.

American leadership is needed here, since two of the world’s largest polluters, Russia and China, have shown no interest in reducing fossil-fuel use, which provides jobs and growth for their own people, but puts the rest of the world at risk. Only America, alongside its allies, has the weight to pressure these time-zone-spanning nations into seeing their enlightened self-interest.

The Islamic Republic is on the brink of the atomic bomb as well as the long-range ballistic missiles to carry nuclear warheads. That puts both NATO nations and the United States itself in the crosshairs. It is simply an appalling prospect.

Sanctions are an important tool of U.S. policy toward Iran, and in the absence of an agreement to end its nuclear program, they should continue. But sanctions alone are not enough. Iran, since 1979, has been among the most sanctioned nations on Earth, and yet, in all of these years, it has shown few signs of changing course.

A new, larger American strategy towards Iran is urgently needed.

Diplomatic efforts must be paired with a credible military threat. Biden has been explicit that he will not allow Iran to have nuclear weapons. These words cannot be hollow. An empty promise would mean that neither America’s friends nor its rivals can trust its promises. With trust, chaos rules.

In the wake of the September 2022 death of Mahsa Amini, a twenty-two-year-old woman who was allegedly beaten to death by Iranian security forces for refusing to cover her face and hair, the Iranian government has reportedly killed hundreds of demonstrators and arrested thousands more. Iran’s leaders do not rule by the consent of their people, but, in spite of them. As a result, the regime is unstable.

A shaky regime with the ability to send nuclear bombs thousands of miles is an unacceptable combination.

The United States should strengthen its outreach and support for Iran’s students, trade unions, minority leaders (especially Kurds in its northwest and the Arabs in its southwest), and dissident clerics—and feature them on Voice of America’s Persian-language broadcasts. Biden should cite them by name in presidential speeches and Congress should hold hearings featuring eyewitnesses to Iran’s savage war against its own people.

The whole world was impressed by the indomitable courage of the Ukrainian people, who courageously faced down Vladimir Putin’s murderous invaders in 2022. Outnumbered and outgunned, they fought on. Once the West agreed to provide powerful long-range weapons, including HIMARS, the tide turned and Ukraine won back large stretches of its stolen land.

Without U.S.-supplied arms, Ukraine might have fallen, taking Europe’s faith in America down with it. NATO would have been a dead letter; U.S. leadership an anachronism. China would have noticed too. It might have gone to Taiwan’s shores as Putin’s tanks toured Kyiv. Fortunately, this nightmare has been prevented by the United States’ strong leadership.

It is more of this enlightened, active leadership that the world cries out for.