Can Putin Bring Out the True Potential of India-Russia Relations? 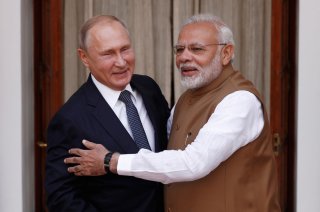 After its Galwan Valley clash with China in 2020, New Delhi has imbibed a strong “pointed alignment” strategy wherein it has focused on augmenting ties with partner states to respond to shared issues that are paramount to India’s national interests. India’s recent decision to deploy two regiments of Russian S-400 missile defense systems along its borders with both Pakistan and China—even as it faces potential sanctions from the United States under its Countering America’s Adversary’s Through Sanctions Act (CAATSA) legislation—and the recently concluded state-visit of Russian president Vladimir Putin to India, indicate that Russia is one such key partner for New Delhi. However, India’s growing focus on the United States and its complex and turbulent relationship with China has translated to tensions in its partnership with Russia. In this context, has the recent “rapprochement” in defense cooperation between India and Russia really reframed the ties between them? Has the India-Russia Special and Privileged Strategic Partnership reached its true potential, or are such developments more superficial than substantive?

When Putin visited India in 2018 for the Annual Bilateral Summit in New Delhi, it was referred to as “India-Russia: an Enduring Partnership in a Changing World.” Putin’s brief but pivotal state visit to India on December 6, 2021, to hold the  Twenty-first Annual India-Russia summit demonstrates the “enduring” nature of their partnership. Symbolically, the visit—which resulted in the signing of twenty-eight Memorandums of Understanding (MoU)—indicates that the historic partnership between India and Russia remains strong and that both leaders remain committed to further building their partnership despite the differences in their respective ties to China and the United States. The MoUs themselves show the growing berth of their traditionally defense-based ties, ranging across sectors like energy, trade, education, and culture. At the same time, while sectoral expansion of relations is evident, the ultimate focus on defense remains strong and central to India-Russia ties, as seen by the signing of a program for defense cooperation for the next decade (2021-2031). Such long-term planning strategically underscores the critical tenet of Putin’s India visit.

Ahead of the summit, India cleared a long-pending AK-203 Kalashnikov rifle deal worth nearly Rs 5,000 crore with Moscow. Following the deal, both countries now target to produce over 500,000 rifles in India via a joint venture. New Delhi is looking to rapidly modernize its armed forces as a consequence of its border tensions with China (and Pakistan); Russia’s posture in India’s strategic thinking is further emphasized in this regard. New Delhi moving forward with the S-400 system and rifles deal only shows the importance it places on Moscow, even as U.S.-India ties remain strong. The decision is a testament to Indian resolve and highlights its strategic autonomy; It demonstrates that the tight rope India normally walks between the United States, a major defense partner, and Russia, a traditional defense partner, has tilted in favor of Moscow.

India’s growing and active role in the Quad has led to Russian fears about losing not just a “friend” but also its major defense equipment buyer. The competition for the Indian arms market has been a concern for Russia, as Moscow has historically been India’s major supplier. However, Putin’s visit and the agreements may signify that Russia remains in a strong position to continue this trade.

Furthermore, Putin’s visit also signifies that Russia intends to strengthen relations with India to gain a presence in the Indo-Pacific and Eurasian regions. Russia’s closeness to China has effectively limited its influence in the Indo-Pacific. Still, Russia has a keen interest to get a “foot in the door” in order to limit both the U.S. and Chinese bids for hegemony. Russian and Chinese relations have largely been a result of their mutual distancing from the United States and common ideological commitment to communism, rather than traditionally built ties. However, China’s recent growth in diplomatic relations and influence with Kazakhstan, Kyrgyzstan, Tajikistan, Turkmenistan, and Uzbekistan, has deeply uneased Russia, which has been the traditional power in Eurasia. As China’s Belt and Road Initiative (BRI) grows, Russian influence in Eurasia stands threatened. The Russian-led Eurasian Economic Union (EAEU) has been a key partner in China’s BRI; Moscow now fears the lessening of its political and economic clout in the region as the countries grow more dependent on Chinese loans and investments. Ultimately, BRI remains a unilateral venture; Moscow understands that it will never be a jointly beneficial venture with China.

Such changing dynamics in Eurasia have made it necessary for Russia to diversify its options to ensure that Moscow does not become overly dependent on China or relegated to being a junior partner in the Russia-China relationship. As a pivotal Indo-Pacific power, India provides a vital and strong gateway to Russian entry into the region. Accordingly, Russia has stood firm in supporting India on tertiary issues, including the question of Jammu and Kashmir, despite Moscow’s ties with Pakistan. Furthermore, while China has strongly rallied against India on the issue, Russia has openly supported New Delhi’s inclusion as a permanent member of the United Nations Security Council. Similarly, Russia has also been a strong supporter of India’s representation at the Nuclear Suppliers Group (NSG) despite China’s resistance.

Likewise, India has supported Russia in multilateral affairs—by staying engaged with Moscow in forums like the Asian Infrastructure Investment Bank, Shanghai Cooperation Organization, and BRICS (Brazil, Russia, India, People's Republic of China, and South Africa), reminding that these forums should not entirely be allowed to be dominated by China, even though Beijing has been the linchpin behind most of these multilateral forums. Besides, India has not reacted to the current international debate on Russia’s possible invasion of Ukraine. More importantly, India has somewhat supported Russia’s overarching vision of a multipolar world, which involves making global governance and multilateral institutions more pluralistic and inclusive and therefore representative of the shifts in global power caused by the rise of emerging powers. Such mutual support of each other on issues of territorial integrity, non-interference, and the importance of the United Nations has helped strengthen their bilateral relationship.

India-Russia Partnership: “All-weather” But Not Comprehensive

India-Russia relations have strengthened, and perhaps, been somewhat reframed post-Putin’s visit. Nevertheless, although the defense sector remains a central driver of their partnership with some efforts to broaden ties, this is hardly sufficient to build a comprehensive partnership. Notably, the twenty-eight MoUs agreed to after Putin’s visit did cover different sectors but ultimately held a defense outlook to them, including cooperation vis-à-vis space and counterterrorism in Afghanistan amid the Taliban threat. Hence, the most significant achievements were made with regards to defense and defense-driven economic trade, with a goal to boost annual trade to $30 billion by 2025 from the current $8.1 billion recorded between April 2020-March 2021. Energy security was also a point of focus, with both countries signing oil contracts and agreeing to an uninterrupted supply of coal to India to support its steel industries. Therefore, the biggest achievement of the visit was the strengthening of security and defense through the ten-year defense cooperation deal, which includes extending military technology collaboration and manufacturing.

While Putin’s visit to India and the 2+2 dialogue that ensued highlighted the “enduring” and defense-focused nature of India-Russia ties, they remain far from reaching a comprehensive stage. In fact, the Indian-Russian “special and privileged” partnership has not reached its full potential yet. It continues to fall short on the global stage, especially since India’s embracing of the Indo-Pacific has advanced much more than New Delhi’s connection to Central Asia. This prevailing imbalance and the geopolitical and security dynamics that India is faced with vis-à-vis China—suggests that despite the critical importance India accords to Russia, efforts to reframe and strengthen the India-Russia partnership will ultimately always fall short of capturing the pomp and intense synergy visible in the India-U.S. “Comprehensive Global Strategic” partnership. In other words, deeper and broader association with Russia will by no means harm India’s determination to engage with Indo-Pacific groupings, like the Quadrilateral Security Dialogue, and partners.

For India, as important as defense ties with Russia may be, they cannot help meet its China challenge while Russia continues to adhere to an equidistant equation with both New Delhi and Beijing. The Galwan Valley clash was a turning point in India’s China engagement, and more importantly, its regional threat perception; it highlighted how India needs to focus on alliances if it is to be strong enough to deal with China. For Russia, however, the conflict involved its two most important strategic partners taking aim at each other, and Moscow decided to remain as neutral as possible. And under such conditions, the United States remains a more dependable partner for India amidst their shared threat of China. Even though the India-Russia partnership has seen surges with Putin’s visit and defense deals, these remain insufficient in significantly raising the profile of their partnership in comparison to the United States.

Washington has long viewed the rise of China as a threat to American hegemony, with its actions in the Indo-Pacific driven by a competition for influence and global primacy. Strengthening ties with allies like India via formats like the Quad is rooted in such thinking. The common aim to counter the threat posed by China binds the United States and India in a way that will never be the same for Russia and India.