Can the Quad Transform Into an Alliance to Contain China? 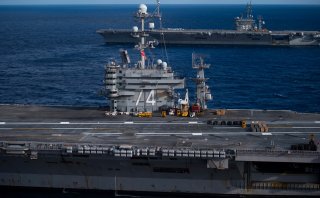 Whither the “Quad”? Is the Quad, or Quadrilateral Security Dialogue—a loose grouping of likeminded Indo-Pacific nations—a military coalition in the making?

Maybe—but how tight that fellowship becomes is largely up to Communist China, the provocateur that brought disparate partners together in the first place.

The Quad is made up of India, Australia, Japan, and the United States. The United States acts as the hub of this consortium. It shares close and longstanding bilateral alliances with two of the members, Japan and Australia, providing a durable basis for tripartite cooperation in East and South Asia. The other spoke is flimsier. How India will relate to the Quad is the real question.

This is not a country eager for alliance entanglements. Just the reverse.

Current events may yield insight into the Quad’s future. At present Secretary of Defense Lloyd Austin is visiting India on his first foreign trip. Austin traveled to Tokyo and Seoul in company with Secretary of State Anthony Blinken before tarrying in New Delhi. Quad members convened for a virtual summit on March 12. And on the bilateral level, New Delhi and Washington have concluded four “foundational defense pacts” since 2002, putting in place measures for bilateral military cooperation of various types. These agreements lay the groundwork for enterprises serving mutual interests should the partners choose to undertake them. That’s heartening news.

The U.S.-India agreements do not add up to a political commitment of any kind, let alone a mutual defense pact. They do provide the option to work together, and thus grant the partners freedom of maneuver in trying circumstances. The Quad is more of an entente cordiale than an Asian NATO.

According to Harvard professor Stephen Walt, three adhesives tend to bind together alliances, coalitions, and partnerships: common interests, threats in particular; social, political, and cultural affinities between the partners, such as a common language or heritage; and material incentives or disincentives applied by the dominant partner. Walt lists these glues in descending order of importance, and for good reason. Societies under threat naturally look for outside support, especially if they cannot manage challenges out of their own resources. They make common cause to survive—and survival is the most basic instinct for individuals and societies.

Walt doubts the other two adhesives are sticky enough to unite international consortia on their own. Sociocultural affinities do make for more intimate cooperation between partners that band together out of common interests. Material factors, meanwhile, are the least durable. After all, if a dominant ally bankrolls an alliance, renting its allies’ allegiance, their loyalty lasts only as long as the leader keeps paying the rent. If a dominant ally strongarms allies into joining it, their allegiance lasts only as long as the coercion does. In fact, a nonconsensual alliance can drain the leader’s resources and energy. Just ask the Soviet Union, Napoleonic France, or the Athenian Empire how easy it is to police unwilling allies.

Let’s use Walt’s metrics to gauge the Quad’s prospects. As he might have prophesied, a common interest in counterbalancing China brought the arrangement together over time. China also gets a vote in how it evolves. The more domineering Beijing’s conduct, the more closely the Quad partners will cooperate to offset its ambitions. It’s no accident that the tempo of Quad meetings, agreements, and military exercises has picked up in recent years, when China took to abusing its neighbors in East Asia and encroaching on the Indian Ocean region.

Does that mean China’s leadership could abort the Quad by moderating its words and deeds? I’m not so sure. It gets a vote, not a veto. If the twenty-first century has taught the region anything, it’s that China is not to be trusted. It used to pursue “soft-power” diplomacy, portraying itself as an innately beneficent great power on the rise. Beijing pointed to the “treasure voyages” of the Ming Dynasty admiral Zheng He as proof that China would never wrest territory from fellow Asians or otherwise molest them. It summarily jettisoned its charm offensive about a decade ago. It now glowers at its neighbors. It seems soft power now means cowing others into submission, not conciliating them.

Nor are promises issuing from Beijing sacrosanct, even if codified by treaty. Chinese spokesmen repeatedly foreswore efforts to obtain overseas military bases, only to pivot and open one in Djibouti in 2017. It is a charter member of the UN Convention on the Law of the Sea, but it rejects fundamental precepts of the law of the sea and flouted an international court ruling that struck down its unlawful claims to maritime jurisdiction. And on and on. Every Chinese commitment comes with a shelf life, and the communist leadership determines when it expires. People notice such things.

I suppose there are tactical advantages to regarding peacetime diplomacy as war by other means, and to making deception its core. But being powerful and deceitful comes at a cost. When sizing up a potential threat to national security, strategists examine the prospective antagonist’s capabilities and its intentions—the components of its strength. If the opponent’s conduct is duplicitous, erratic, or openly menacing, they have no choice but to assume the worst—and plan against its capabilities. And China’s capabilities are expanding at a prodigious rate. It has set a dangerous cycle in motion.

And that cycle is set to continue. It’s doubtful in the extreme that Beijing could go back to its softly, softly diplomacy—even if it wanted to. No one would believe it. Meanwhile it keeps augmenting its military might. In all likelihood, then, protracted strategic competition awaits—no matter how party chieftains comport themselves from now on. Judging from interests and threats, the Quad is here to stay in one form or another.

In some ways culture is a glue helping the Quad cohere. But in others it’s a solvent. The U.S.-Australian and U.S.-Japanese alliances are as sturdy as they come. These standing accords have existed for so long that they have come to form part of the allies’ individual as well as common heritage, much as NATO cemented the Atlantic community many decades ago. Disunion is almost unthinkable. It might seem that culture would attract India to such a multinational fellowship as well. After all, India is an English-speaking democracy and an offshoot of the British Empire, much like the United States and Australia. It has common ground with two of three fellow Quad members in the form of language, political institutions, and history.

But differences stand out as well. Great Britain did not found India the way it founded Australia and the United States. By contrast, the Raj was a brief if influential interlude in the subcontinent’s venerable history. Their variegated traditions give Indians an outlook on the region and the world that differs somewhat from other English-speaking societies. More recent history has its influence as well. India prides itself on its nonaligned status and strategic autonomy, which work against membership in formal alliances. It sees itself as a benign hegemon over the Indian Ocean. It fought Japan during World War II, and has an occasionally fraught past with America dating to the Cold War.

Cultural affinities are probably still a net plus for the Quad—but clearly the members have some baggage to overcome.

And the material dimension? These are prosperous societies, the pandemic notwithstanding. Military sage Carl von Clausewitz notes that there are two basic types of alliances: alliances of equals and those dominated by a hegemon. It might be true that the United States has the most to contribute to the Quad in resource terms, but it cannot expect to impose its wishes on its partners. Washington must treat the arrangement as a partnership among equals, and comport itself accordingly. A spirit of compromise and mutual deference suits this sort of informal consortium. That Secretary Austin took the trouble to travel to India and Japan is a sign that U.S. leaders have the correct attitude.

Let’s keep it up.

Austrian diplomat Klemens von Metternich might add one final point to this appraisal. Toward the endgame of the Napoleonic Wars, it appeared the coalition battling the little emperor might fracture—as so many had before. Interests and policies were starting to diverge, pulling the allies apart. This prospect alarmed Metternich, who told one interlocutor: “it is with alliances as with all fraternizations; if they do not have a strictly determinate aim, they disintegrate.” The Quad has no strictly determinate aim. The good news is that no partner is likely to embroil others in endeavors they would prefer to forego. The bad news is that the partners may waffle in stressful times while debating policy and strategy.

Keeping the Quad informal thus grants China time and the initiative. After all, Chinese Communist Party leaders have little need to consult with allies, still less to win them over to Beijing’s policies. China can act. Alliances of equals have no such luxury. If Austin and his counterparts in New Delhi, Canberra, and Tokyo can’t agree on well-defined aims, they can at least explore what is and is not possible for the partnership. That way they won’t be caught off-guard when trouble looms. The chances of concerted action will brighten.