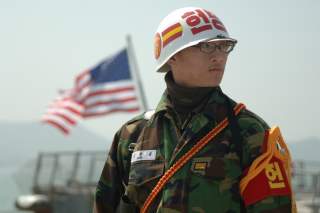 One of the world’s leading industrial powers and America’s most important allies no longer has a government—or at least a president, in anything but name. And it will be months before a new, effective chief executive is in place in the Republic of Korea.

America went through its own prolonged crisis of presidential authority in 1973, with the steadily widening Watergate revelations and Richard Nixon’s eventual resignation. The saga offered a stark reminder of one of the benefits of Westminster parliamentary government: failing leaders usually are ruthlessly dispatched by ruling parties hoping to hold onto power. Not so in presidential systems.

Today’s imbroglio includes alleged undue private influence on the government and political shakedown of corporate chaebol, usual staples of past South Korean scandals. But added are the roles of an old family friend, a discarded tablet computer containing files of presidential documents, and the peculiarly Eastern element of a shaman and old-world spirituality.

The result was the impeachment of President Park Geun-hye, daughter of the military dictator credited with triggering the ROK’s economic takeoff. It took murder to remove him from the apex of government. Her likely political execution was delivered by the National Assembly. Even if she is saved by South Korea’s Constitutional Court, she would be little more than a lonely figurehead.

President Park’s narrow election victory in 2012 seemed to cement conservative control of the national government and led to a steadily tougher policy toward North Korea. Most notable was her closure of the Kaesong industrial park, cutting off nearly $100 million annually in hard currency for Pyongyang. She subsequently became a particular object of hatred in the Democratic People’s Republic of Korea.

While her popularity had faded, as was typical for the South’s succession of democratically elected presidents, the ongoing scandal reduced her approval rating to 4 percent. Mass demonstrations demanded her ouster. Members of her own party joined the overwhelming legislative majority in voting to impeach her.

But here it gets interesting: she is suspended. The acting president is Prime Minister Hwang Kyo-ahn, whom she had planned to replace, but whose successor had not been approved by the National Assembly. The Constitutional Court could take months—four to six, most observers predict—to rule on her ouster. If she is forced from office, a special election will have to be organized, even though the normal poll is scheduled for December.

However, her removal is by no means certain. Two-thirds of the nine judges must agree, and most of them were appointed by her Saenuri party. Moreover, the terms of two of the jurists expire in March. If no decision is rendered by then, they will be off the court and no replacements can be appointed, which would make a supermajority even harder to achieve. If the court fails to affirm her ouster, she will limp on as president until December, vilified by the public, afflicted by continuing demonstrations and abandoned by her own party. The usual mechanisms of government would function, but she would be bereft of authority, ill equipped for respond to any emergency and unable to chart relations with the incoming Trump administration.

Whatever the Constitutional Court’s decision, Park is political and legal roadkill, facing prosecution the moment her presidential immunity expires. Already everyone is looking ahead to her successor. Acting President Hwang is Park’s man, and accordingly unpopular. He will have little authority—and none after the next election, whenever it is held.

Moon Jae-in leads the opposition party, lost narrowly to Park in 2012 and now heads opinion surveys. He would seem to have the inside track to the presidency, but Seoul mayor Park Won-soon has gained attention by promoting left-wing causes and attacking President Park. Another leftish activist on the rise is Seongnam mayor Lee Jae-myung, who calls himself Korea’s Bernie Sanders. Park’s collapse leaves the opposition well positioned to take control.

However, UN Secretary General Ban Ki-moon is likely to seek South Korea’s presidency after his term expires at the end of December. He had been expected to enter the ruling party, but now may join/form another. Ahn Cheol-soo heads a smaller party. He was a left-leaning contender in 2012 but ended up backing Moon; this time he may run.

There is speculation that Park refused to resign to let passions ebb and give Saenuri time to recover. An immediate election probably would make Moon president. Saenuri’s best hope is a multi-candidate race late next year, in which several left-wing candidates split the vote. By then the DPRK may have made yet another provocation, inflating support for the right’s tougher stance toward the North.

Washington officials are less concerned about South Korea’s domestic sensibilities and more about policy toward both North Korea and America. Hwang likely will be on autopilot, with little impact. Ahn has focused on domestic issues, such as equality and justice. Even if he shares the left’s perspective on inter-Korean questions, foreign policy won’t likely be a priority. At the UN, Ban emphasized diplomacy. What he would do at the helm in Seoul is not clear, though he is presumed to lean in a more rightward direction.

Although Moon formally backs the South Korean alliance with America, he has called for “balanced diplomacy” with the United States and China; many opposition activists oppose deployment of the anti-missile THAAD system. Moon also complained that sanctions won’t end North Korea’s nuclear program, though UN and U.S. measures imposed in recent years would make it difficult for a new South Korean government to restart anything like the gentler “Sunshine Policy” of yore. Moreover, Pyongyang’s continuing nuclear developments have hardened popular opinion against the North’s Kim dynasty. The other potential opposition candidates are thought to generally share this perspective.

In practice, even when strong critics of the United States, such as opposition lawyer turned president Roh Moo-hyun, for whom Moon was chief of staff, are elected, they tend to reaffirm the trans-Pacific military tie. After all, most South Koreans prefer to save money by having Americans pay for their defense. All but the most naïve realize they need some form of protection against the North.

If development of future policy must necessarily remain in abeyance, maintenance of the peace will remain the first priority. The fact that the United States, in the midst of its own power transition, must worry about the ROK’s security is a reminder of the cost of alliances that are antiquated, even “obsolete,” to use the president-elect’s term. Washington should have long ago turned over responsibility for South Korea’s defense to the South Koreans. Failing to do so has left America entangled and at risk while the South sorts out its political mess.

None of the ROK’s democratically elected presidents, dating back to 1987, have been able to retire without controversy. But Park is the first who may be forced from office prematurely. At this time her future matters only to her, but how and when her successor is chosen matters greatly to her countrymen—and, ultimately, to Americans. Incoming president Donald Trump should follow his instincts and reconsider an alliance which makes the United States hostage to a shaman’s ministrations in Seoul.