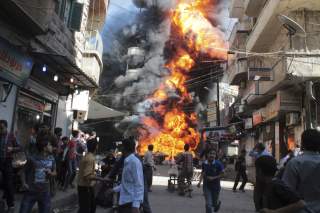 Afghanistan is America’s longest war, at seventeen years and counting. It has run longer than the Mexican-American War, Civil War, Spanish-American War, World War I, World War II, and Korean War combined. Yet Congress has conducted minimal oversight and done nothing as the executive branch’s aim devolved into pushing failure onto the next administration.

Members also sat like potted plants as presidents illegally made war in Libya, Syria, and Yemen and threatened to unilaterally strike Iran, North Korea, and now Venezuela. Legislators preferred to avoid committing themselves. If the ensuing conflict goes well, then they will applaud the president; if it goes badly, then they will criticize his impetuous incompetence. They routinely refuse to live up to their constitutional responsibilities, unless forced to do, as when President Barack Obama tossed the issue of bombing Syria to Congress.

Now, however, the Senate has voted to condemn “the precipitous withdrawal of United States forces” from both Afghanistan and Syria. Doing so “could put at risk hard-won gains and United States national security.” The measure was offered by Majority Leader Mitch McConnell, who has spent his entire career cheerleading every unconstitutional action military taken by every president. He recently, and doggedly, resisted allowing a vote on an authorization of force against the Islamic State. Thus, the fight against ISIS and consequent military deployment remain illegal. Even now McConnell and the vast majority of his colleagues refuse to abide by the Constitution.

Almost comical is the resolution’s reference to “hard-won gains.” Coincidentally, earlier the same day the Special Inspector General for Afghanistan Reconstruction released his latest quarterly report. The reality on the ground is accurately described as “hard-won,” but there are few “gains” to record. More territory and population are under Taliban control. Afghan troop numbers are down. Corruption and opium production remain at crisis levels. Increased allied participation in combat has been necessary to slow Taliban gains. The Director of National Intelligence warned that Afghanistan is likely to continue deteriorating even with Western support.

In Syria the government has won, despite Washington’s efforts. The evanescent “moderate” insurgents backed by the United States proved to be neither especially liberal nor particularly effective. They also committed many of the brutalities accompanying Turkey’s attack on Syrian Kurds in the Afrin area a year ago. Even with a couple thousand Americans ensconced in Syria’s north, Ankara is not going to abandon its campaign against Kurdish militias near its border. The working relationships that Iran and Russia have with Syria are well-established and won’t be disrupted by U.S. forces in Manbij. Kurds would be safer if Syria, a weak state but with sufficient authority to satisfy the Turks, reestablished border control.

The only serious Syrian gain for America is the destruction of the Islamic State’s caliphate fantasies. ISIS fighters still lurk about, but Washington has finished the toughest job, breaking the Islamic State when on the rise. Today virtually every government and movement in the region has an incentive to ensure that ISIS does not return. Of course, the radical ideal remains, but Washington’s involvement actually increases the organization’s theological appeal.

As for the Kurds, they fought for themselves, not America. The U.S. has no obligation to protect them because of their cooperation. Rather, Washington must put the interests of its own people, including in uniform, first. Moreover, any security guarantee would have to be permanent, since the threats won’t disappear. If that is what McConnell and his colleagues desire, why don’t they introduce legislation formalizing a defense treaty and military deployment toward that end? They should make their case to the American people.

Taking a somewhat different approach from the Senate resolution is bipartisan legislation introduced in the House barring troop withdrawals from Syria and South Korea without assurances from most everyone in the national-security bureaucracy, excepting the janitor, that doing so would be okay.

American forces in the Republic of Korea date back to 1950. Ironically, the Korean War was another illegal conflict, never winning the approval of Congress. More significantly, the ROK deployment long ago became obsolete. Today the South enjoys a fifty-to-one economic advantage and two-to-one population edge over its northern antagonist. America’s “gain” was to successfully shield South Korea, allowing the latter to recover from the horrendous effects of the Korean War and become a leading global power. Collecting on that “gain” means shifting the burden for the ROK’s defense onto the ROK.

Congress’ bipartisan foreign policy appears to be: whatever is must always be. Even seventy years after the Korean War, accompanied by vast economic and geopolitical changes regionally and globally, legislators, and the rest of the Washington foreign-policy blob, say it is too soon to make the slightest adjustment to American strategy. Let alone to place responsibility on others for their own security.

McConnell, who is revealing himself as one of the upper body’s uber hawks, offered his justification to USA Today: “The United States is engaged in Syria and Afghanistan for one simple reason: because our enemies are engaged there.” Failed presidential candidate Marco Rubio made a similar claim, that “These people, who are going to operate in these safe havens and Iran, we are their target.” These are silly contentions, however, especially in a world featuring terrorists who operate most everywhere. After all, Osama bin Laden was killed while in Pakistan. Khalid Sheikh Mohammed, the architect of 9/11, lived variously in Bosnia, Kuwait, Qatar, and Pakistan, where he was captured—but never in Afghanistan. Today the most effective Al Qaeda affiliate is located in Yemen. Presumably the United States should occupy Pakistan, Saudi Arabia, most of the Gulf, and the Balkans, at least.

Moreover, the Taliban is Washington’s enemy only because Washington is there. After 9/11 the United States had to degrade Al Qaeda and punish the Taliban for hosting Al Qaeda. But that was achieved almost immediately. Americans have been dying since then mostly in a forlorn attempt to bring liberal centralized governance to Central Asia, something Congress never endorsed. The Taliban wants to be left alone, not attack America. As for Al Qaeda, it is active all over, including in Syria, where Washington aided the local Al Qaeda affiliate. Is the group an enemy or not? Better for the United States to confront terrorism where it threatens with a focus on domestic vigilance, foreign intelligence, international cooperation and financial strangulation.

If Syria, Iran and Russia are America’s enemies, then it is only because Washington has decided they are enemies. All are bad regimes with contrary aims, but that is no justification for illegally occupying part of Syria and threatening war. Iran is a particularly malign actor and has become a fixation of the Trump administration, but Washington has consistently been the more hostile party: fomenting a coup, supporting the Iraqi invasion, backing Baghdad’s de facto allies in that fight, shooting down an Iranian airliner, arming aggressive, intolerant Saudi Arabia, and constantly threatening Tehran with military assault.

Finally, America’s enemies have plenty of enemies. The latter have far more at stake in defeating the Islamic State than America. Notably, the Islamic State was concentrating on becoming a quasi-nation state, not launching terrorist assaults—consciously separating itself from Al Qaeda—and never organized an attack on America. Most foreign assaults were by locals inspired by the Mideast killers. The movement much more directly threatens most everyone in the Middle East. Now that Washington has eliminated the Islamic State’s most significant combat capabilities and the Syrian civil war has largely wound down, regional combatants can concentrate on their common adversary.

The McConnell measure, which has no legal force, was more partisan ploy than serious policy. GOP members got to preen as uber-hawks, affirming yet again that they are willing to go to war at the drop of a hat, or even less. Democrats were divided, with some voting yes simply to embarrass the administration. Others were more prescient. Sen. Chris Murphy warned that the amendment “could, frankly, get us even more deeply mired into a series of conflicts in the Middle East.” As if wars in Afghanistan, Iraq, Libya, Syria and Yemen were not enough.

Some Senators appeared to be aware of the risk. Sen. Robert Menendez, the ranking member of the Senate Foreign Relations Committee, insisted that his yes vote was not to endorse war: “We are not in the business of authorizing open-ended conflicts or keeping our troops on the battlefields forever.” True, Congress never votes for endless war—it simply refuses to vote and allows the president to war endlessly. What else explains the seventeen-plus years that U.S. troops have spent in Afghanistan?

If legislators want to carp because the president has sensibly decided to terminate foolish, unnecessary, and unproductive military interventions, then they should have voted on initially authorizing those deployments. McConnell’s measure was an ugly mix of ignorance, sanctimony, politics, and hypocrisy. American involvement in those wars has gone on long enough. It is time for U.S. forces to come home.