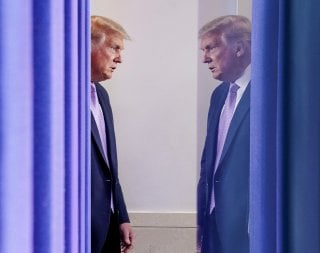 This November’s election promises to be one of the more contentious presidential races in recent American history. Donald Trump has compiled a controversial record in both domestic and foreign policy, seeking to reorient not only the Republican party but also America, creating a stream of near-constant debate across the political spectrum not seen in generations. The debate has only grown more heated thanks to the COVID-19 pandemic and resulting economic challenges the nation now faces.

Accordingly, a passionate debate exploring all aspects of the Trump presidency has been a near-constant presence in the pages of the National Interest’s website daily as well as in our print edition. The editors and publishers—mirroring the debate we see playing out across our county—could not agree on a single endorsement for president. Instead, we produced two long-form essays which both agree that this is a potentially historic election impacting the very future of the republic, but which take radically different views on where the potential dangers emanate from and which candidate provides the best solution.

Both authors are passionate about their views and provide important perspectives: Simes, the President and CEO of the Center for the National Interest, provided informal advice to the Trump campaign in 2016, while Zakheim, Vice Chairman of the Center and former Undersecretary of Defense (Comptroller) under the George W. Bush Administration, signed several prominent and widely circulated letters making the case against Donald Trump’s candidacy for the presidency that same year.

Simes contends that a second Trump term could be more successful than the first and, above all, that the sharp move toward left-wing authoritarianism in the Democratic party renders it imperative that Joe Biden not replace Trump as president. “The election is not only about what the incumbent president has done,” he writes, “but also about the actions of the opposition—in this case, the Democrats—to checkmate his efforts.” Zakheim, by contrast, excoriates Trump for his record on domestic and foreign policy, concluding that he will go down as one of the worst presidents in American history: “far too many of his policies undermine both America’s cohesion and prosperity at home and its leadership abroad.” To watch the exchange of views between Simes and Zakheim, which is moderated by National Interest editor Jacob Heilbrunn, please click on the video above or this link here.