Charlie Hebdo, Islam, Racism, and Everything Else America Gets Wrong about France 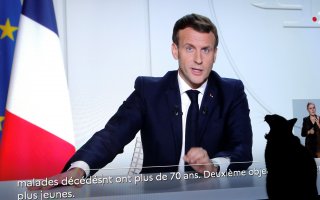 Samuel Paty’s horrific death has been a moment of deep reckoning for France. Paty was beheaded by a young Islamist Chechen refugee for having shown Charlie Hebdo cartoons of Mohamed during a class on free speech. These tragic events happened some five years after the attack on Charlie Hebdo, and a month after the start of the trial of some of the accomplices of “Charlie’s” murderers. And more recently, were followed two weeks after by another tragic attack in a church in Nice.

The French government has started to look into potential measures to deal with what French president Emmanuel Macron dubbed “Islamist separatism.” Macron is far from the first prominent politician to have expressed this fear of separatism. Former Socialist president François Hollande worried that the rise of radical Islam would lead to a “partition,” while Macron’s former Minister of the Interior Gérard Collomb feared that the French are “living side by side” but that they could soon be “face to face.”

Paty’s fate may just be the tip of the iceberg, with professors across France sharing their stories of radical parents and students trying to intimidate them. Teaching biology, history (with many professors reporting immense difficulties teaching the Holocaust), and even literature has become extremely difficult. Some 40 percent of professors admit to self-censoring to avoid incidents with pupils (and their parents), while 26 percent of French Muslims aged fifteen to twenty-four refuse to condemn the terrorists that killed Charlie Hebdo’s journalists—a clear sign that French schools are no longer capable of educating responsible French citizens without significant help.

Some of the measures announced include the shuttering for six months of the Mosque of Pantin—a known hotspot for radicalism that had widely shared a video asking for Paty’s firing over showing the cartoons in class—and dismantling some NGOs over their troubling ties with radical Islamist groups.

These measures have been met with a barrage of criticism—not so much in France, but abroad, where publications and intellectuals of all stripes and colors chimed in on what they considered to be the real cause France’s tensions. Undermining what they argued were Macron’s overblown concerns on separatism, they laid the blame for the current tensions squarely on the policies of France’s current and past governments.

These criticisms nearly always come down to the two following points: the lack of economic opportunities in the banlieues, and the radicalizing effect of France’s alleged racism. Not only are these criticisms unfounded, but they reinforce the narrative of the Islamists, who are keen to present France in its worst possible light to push their agenda.

As a student in the United States during the 2015 attack on Charlie, I remember attending conferences on terrorism where State Department officials and professors reacted compassionately to what happened in France but often blamed France’s flailing economy for the current chaos. The lack of economic opportunity allegedly led unemployed and impoverished young men to turn to radical options. I remember an “It’s the economy, stupid” quip getting a few chuckles.

The most sophisticated case for this “social” explanation for terrorism has been made by the political scientist Olivier Roy. Roy argues that the current events are not the result of a “radicalization of Islam,” but rather the product of an “Islamicization of radicality.” In other words, today’s jihadists would have been yesterday’s Red Army Faction or Action directe communist bomb-throwers.

In 2017, then-presidential candidate Macron shared this materialistic understanding. He saw mass unemployment and the lack of professional options as the main issues. He talked positively of Uber and other digital startups that had hired massively in the banlieues, seeing a blueprint for the future. The presidential candidate wanted France to become a dynamic “start-up nation” rather than languish on the “sad passions” of identity.

But this social explanation does not match the profile of French jihadists. Far from being caricatures of the desperately poor wretches with no prospects, most were raised in middle-class families (67 percent), with only 16 percent raised in working-class families. French journalist David Thomson has spent months in contact with many jihadists and argues in his book The Revenants that the “banlieue-immigration-poverty-petty criminality” vision misses the mark. He argues that the men joining the Islamic State for the most part “were well established in their active life, with a family and decent wages, before leaving because of their religious and political convictions.”

People leveling these accusations against the French Republic also seem to suggest that it has essentially abandoned the banlieues. Again, this couldn’t be further from the truth. The first “plan banlieues” attempting to improve the living conditions in these ghettos dates back to 1977. In 2000, the government spent €8 billion for the banlieues in another plan. The 2003 National Plan for Urban renovation led to some €47 billion in spending. Overall, between 1994 and 2019, some €75 billion were spent in “banlieues plans.” France also has generous redistribution schemes, spending in 2016 around €714.5 billion in welfare payments. In addition, one has to consider that some departments in France like rural Creuse or Ariège are comparably as poor and at least as far away from economic opportunities while not being breeding grounds for Islamism.

This is not to say that the lack of economic opportunities has no effect, but it is a catalyst among many others—not the primary driving force behind Islamism. While France has been hit especially hard by Islamist terrorism, it has not been the only country targeted. Even Germany, whose economy has been consistently overperforming France’s for the past fifteen years, faced major terrorist attacks from homegrown Islamists while over seven hundred Germans joined the Islamic State. Similarly, Sweden, a country heralded for its generous social system and its liberal values, saw three hundred of its citizens join the Islamic State out of a population of ten million (versus nine hundred French foreign fighters out of a population of sixty-six million).

The second argument leveled against French society and government is their supposed racism. The argument goes that postcolonial France has kept much of its colonial mentality. Its fiercely chauvinistic worldview and its distrust of Muslims breeds significant resentment among immigrants and their family, and then radical Islam fills that void.

These accusations are unfair. France hosts a larger Muslim population than any of its European neighbors, even edging the United States despite having a significantly smaller population. Polls also show that the French are more tolerant towards Islam than their European neighbors, with 85 percent of French citizens telling Pew Research that they would be willing to accept Muslims as neighbors, edging out Germany, the UK, and Ireland.

France’s critics will usually concentrate their attacks on French laicité. There’s a deep distrust of France’s laicité by foreign reporters and intellectuals, who suspect it is—or at least has become—little more than a heavy-handed weapon to justify Islamophobia.

Describing the concept of laicité to a non-French audience has long been a major struggle. Laicité is essentially France’s form of secularism, which guarantees freedom of worship while also focusing acutely on limiting the power of religion on the public sphere—a product of a history marked by regular conflicts between the monarchy and the Pope, the wars of religion after the Reformation and the French Revolution (where the clergy often ended up siding with opponents of the revolution). In 2004, in the name of laicité, the government enacted a law that ensured the religious neutrality of public education by prohibiting the wearing of ostentatious religious clothes and symbols (such as crosses or face veils). In 2010, another law banned face-covering veils, or burqas, in public, but mostly on national security grounds.

But the idea that French Muslims see laicité as a tool to oppress them does not hold up to any form of scrutiny. In 2005, a year after the 2004 law on religious symbols, laicité had a positive connotation for 81 percent of French Muslims. In 2011, 60 percent supported the 2010 law that banned the wearing of the full-face veil in the streets. In 2019, 70 percent thought that laicité allowed Muslims to practice their faith freely.

Putting a Target on France’s Back

The pundits and politicians in France and abroad who have been calling out an alleged “state-sponsored Islamophobia” should be wary about joining their voices with a chorus of unsavory international actors such as Turkish president Recep Tayyip Erdogan, who has in the past months launched brutal attacks against Macron for his alleged Islamophobic policies.

In addition, the term “Islamophobia” should be used carefully as it conflates two distinct phenomena. Islamophobia understood as anti-Muslim discrimination should be called out and punished. Yet too often the term is weaponized against any criticism of Islam. In a democracy, we should be free to criticize and lampoon any set of ideas, including religions, lest we want to reintroduce the blasphemy laws that Voltaire spent his career having to tiptoe around. Muslims should have the same rights as all citizens, but Islam should face the same scrutiny as any other religion or idea.