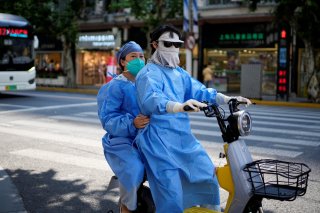 Chinese students and workers have taken to the streets, disgusted with the unraveling of the zero-Covid strategy heralded by the Chinese Communist Party (CCP) and its leader, Xi Jinping, as the envy of the world. The present mess is all Xi’s doing. It is another cautionary tale of what happens when autocrats put saving face before saving lives. The world cannot ignore the irresponsible and unaccountable actions of Xi and the CCP.

Few nations can boast an exemplary record in dealing with the Covid-19 pandemic. After the initial bumbling of lockdowns, mask requirements, and medical shortages, including vaccines, the world’s democracies, through transparent trial and error, protected their populations and learned to live with the virus. Xi and the CCP, given their paranoia and predilection for control, have sought to “annihilate” Covid within China’s borders through excessive testing and draconian lockdowns. Beijing attempted not to vaccinate and live with the virus but to snuff it out of existence. The Chinese surveillance state thought it could coerce nature, but nature is punching back.

In the three years leading up to the CCP’s 20thNational Party Congress, Beijing heralded the zero-Covid strategy as one of the prime accomplishments warranting Xi’s unprecedented third term. All this while China’s vaunted economic growth dropped from 6.75 percent in 2018 to 2.24 percent in 2020 and youth unemployment rose to nearly 20 percent. At the Party Congress, Xi ascended to his third term and rewarded the zero-Covid warriors with high positions in the inner circle of the CCP.

In early November, with Xi secure in his position, the party instructed local authorities to scale back lockdowns, restore the economy, and eliminate Covid. This self-defeating directive resulted in Covid infection spikes and the return of lockdowns, to the great consternation of the public. After three grueling years of zero-Covid, the Chinese people are now confronted with the specter of a nationwide spike in infections and hospitalizations on the road to population immunity, something that most nations experienced in the first year of the pandemic. Xi and his band of zero-Covid warriors have trapped China in an unenviable mess of their own making. Beijing can persist with lockdowns and face public wrath or relax restrictions and confront rampant infections across a nation with patchy immunity from low-efficacy Chinese vaccines and a national health system unprepared to handle mass infections.

Xi could have put his people before his pride and pivoted from zero-Covid to manageable Covid. He could have imported higher-efficacy Pfizer and Modera vaccines and commenced a national vaccination campaign to build population immunity and open up the economy. Unfortunately, history shows that autocracies prize pride over people.

In the final analysis, China’s Covid fiasco is not only a personal failure of Xi but also a systemic institutional failure of the brittle, rigid, and autocratic CCP. The Chinese state’s secrecy, close-mindedness, lack of cooperation, and false pride led to an incredibly irresponsible Covid policy, with both the Chinese people and the international community paying the price.

The consequences go far beyond China’s borders. The regime’s penchant for secrecy and saving face cost the world a critical month as a national outbreak mushroomed into a global pandemic. At the same time, China jailed doctors who wanted to share the truth and bullied the World Health Organization into publishing misleading information about the virus. And the economic impacts of China’s lockdowns continue to reverberate throughout the global economy.

At Davos in 2017, a gleeful Xi attempted to claim the economic mantle relinquished by U.S. president Donald Trump by calling for more invigorated, inclusive, and sustainable economic globalization. Few in the audience could have anticipated that the same Xi would rock global trade and supply chains more than any other leader in the last fifty years.

The Chinese people deserve a swift and safe recovery from the policy mess their leaders inflicted upon them. The international community should be ready to help if asked. After this fiasco, all prudent members of the international community should take umbrage at Xi’s boasts about reshaping the world in the image of the CCP for the “community of the common destiny of mankind.” The world would do well to listen to the brave Chinese patriot who hung a banner proclaiming: “We want freedom, not lockdowns; elections not rulers. We want dignity, not lies. Be citizens, not enslaved people.”

Dr. Kaush Arha is a senior fellow at the Atlantic Council and the Institute for Tech Diplomacy at Purdue.