China Ends ‘Median Line’ in the Taiwan Strait: The Start of a Crisis? 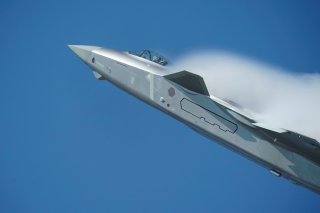 It was a line at sea, separating two sides locked in a decades-long conflict. A gentleman’s agreement rather than an official demarcation governed by legal instruments, the median line (also known as the center line) was a tacit code of conduct of sorts that, for decades, reduced the risk of accidents in the Taiwan Strait, one of the world’s major hot spots. Over the years the two sides—the People’s Liberation Army Air Force (PLAAF), and the Republic of China Air Force (ROCAF)—stuck to their half of the Strait, veering off at the last moment before crossing into the other side and potentially sparking a crisis.

With the exception of a brief incident in 1999, the tacit agreement held until March 2019, when two PLAAF J-11 fighters crossed the median line in the Taiwan Strait, flying 43 nautical miles into Taiwan’s side, forcing the ROCAF to scramble interceptors. The “deliberate” act, as Taipei described it, occurred as Beijing was gradually increasing its military activity near and around Taiwan, which continued until the re-election, in January 2020, of President Tsai Ing-wen in Taiwan against China’s favorite, Han Kuo-yu. Following Tsai’s re-election, PLA naval and aerial activity increased markedly, with several crossings into Taiwan’s Air Defense Identification Zone (ADIZ) and occasional “violations” of a median line that was evidently becoming more porous.

While some analysts attributed the uptick in military activity to an attempt by Beijing to exploit the distraction caused by the COVID-19 pandemic, there was reason to believe that the intensification of military activity was simply a natural evolution in its posture toward Taiwan. The more belligerent behavior reflected frustration in Beijing and a realization that, propaganda notwithstanding, the 23.5 million Taiwanese will not be fooled by Chinese promises of “peaceful unification” under the “one country, two systems” formula. More and more, Chinese hawks have expressed the view that only force can “resolve” the Taiwan “issue” once and for all. Such views have also been expressed in party-controlled media in China, where threats to attack Taiwan and to decapitate its leadership have become almost daily offerings. Although there is ongoing debate on whether Beijing is ready to initiate a major military campaign to seize Taiwan, displays of force meant to intimidate Taiwan (and possibly to collect intelligence on Taiwan’s response mechanisms) have become more prevalent.

Increased PLAAF activity has also become part of a kinetic dialogue between the PLAAF and the U.S. Air Force in the region, where the latter, in response to Chinese behavior, has also increased its presence with passages by reconnaissance aircraft. More recently, PLAAF intrusions in Taiwan’s ADIZ and across the median line have been used to signal Beijing’s displeasure over high-level visits by U.S. officials to Taiwan—Secretary of Health and Human Services Alex Azar in early August and Under Secretary of State Keith Krach in mid-September—and major arms sales announcements by the U.S. During Krach’s visit, the PLAAF conducted unprecedented intrusions in the Taiwan Strait, with 18 aircraft on Sept. 18 (two H-6 bombers, eight J-16s, four J-11s and four J-10s) and 19—in “pincer formation”—the following day (12 J-16, 2 J-10s, 2 J-11s, 2 H-6s and one Y-8 anti-submarine warfare aircraft from the PLA Navy).

During the altercation on Sept. 18, a PLAAF pilot was overheard on the radio telling the pilot in a ROCAF interceptor that “there is no median line in the Taiwan Strait.” During the same incident, a PLAAF pilot also shouted that Taiwan was a “pawn” of “foreign forces.” It was rather unusual for a PLA pilot to make what amounted to a policy statement, and at this point it is difficult to determine whether he had permission to do so or was simply expressing his ultranationalistic passions. Nevertheless, the remark sparked widespread speculation during that weekend suggesting that Beijing had decided to no longer recognize, and abide by, the median line. That speculation ended on Sept. 21 when Wang Wenbin, a spokesman at China’s Ministry of Foreign Affairs, told a press conference that “there is no so-called center line in the Taiwan Strait” (不存在所谓“海峡中线”).

We can only speculate on what can be the possible drivers for Beijing’s increasingly belligerent behavior. Here are a few, and it need not be a single one:

(a) Retaliation over visits to Taiwan by senior U.S. officials and major arms sales;

(b) Need to create an external distraction if, as is suspected, the Chinese economy is a much worse state than we are told. This could also explain recent clashes along the border with India;

(c) Resentment over the tremendous amount of positive publicity that Taiwan has been receiving over its exemplary handling of COVID-19 and in fighting disinformation. This includes a visit by a large delegation from the Czech Republic, led by Senate President Miloš Vystrčil, in early September. Beijing may want to shift the focus away from all the positives that Taiwan has accumulated over the past eight or nine months by forcing attention onto the military elements of the Taiwan Strait.

The weekend’s developments, followed by Wang’s announcement, generated tremendous attention within the policy community, with analysts and government officials trying to ascertain the implications of that shift. It must be emphasized that the “agreement” on a median line in the Taiwan Strait always was a tacit one. Thus, it is possible to interpret Wang’s (and the PLAAF pilot’s) declarations as simply reaffirming that Beijing never officially recognized the existence of a median line and that therefore there is no policy shift. Nevertheless, the obviation of a tacit agreement, one that had been respected in practice, can be construed as a deviation from longstanding policy, and one which markedly alters the rules of the game.

All of this is ostensibly meant to exacerbate the pressure on the Tsai administration, and psychologically to compound a sense of embattlement and inevitability with the Taiwanese public. So far the latter strategy does not appear to be working, and could in fact backfire, both with the Taiwanese and within the international community, which is looking on with concern as China destabilizes the Taiwan Strait. What is undeniable is that the closer to Taiwan PLAAF aircraft fly, the likelier it is that, at some point, there will be a collision, miscommunication, or signals will be misinterpreted and drastic action—a downed plane, for example—will be taken, which could quickly spiral out of control. In such a scenario, Beijing would inevitably blame Taiwan for the turn of events, would likely rely on disinformation to shape perceptions, and depict itself as “compelled” to take necessary retaliatory—and “defensive,” as Beijing would seek to convince the international community—action. It may very well be that Beijing actually wants an “accident” to occur, which it would inevitably blame on Taiwan and use as casus belli. Such risks are increased by the fact that the Tsai government, which so far has shown restraint, will be pressured to take more concrete actions in response to this challenge, especially if PLA aircraft were to approach within 12 nautical miles of Taiwan proper.

All of this creates a dangerous escalatory slope, with powerful forces in Beijing acting against de-escalation once the furies have been unleashed. Given the ultranationalism that the Chinese despot Xi Jinping has been cultivating, it is hard to imagine that he would back off if a clash occurred in the Taiwan Strait.

Is this preparation for imminent war? Arguably not, and soon (from November until January) weather conditions in the Taiwan Strait will be ill-conducive to military operations. However, this certainly represents a new round of psychological warfare against Taiwan and a good opportunity, as we saw, for the PLA to collect intelligence and assess ROCAF responses. Without a doubt, we have entered the most dangerous phase in cross-Strait relations since 2003-2004, if not the Taiwan Strait Missile Crisis of 1995-1996.

J. Michael Cole is a Taipei-based senior fellow with the Global Taiwan Institute in Washington, D.C., the Macdonald-Laurier Institute in Ottawa, Canada, and the Taiwan Studies Programme at the University of Nottingham, UK. He is a former analyst with the Canadian Security Intelligence Service in Ottawa. His latest book, Insidious Power: How China Undermines Global Democracy (co-edited with Dr. Hsu Szu-chien), was published in July this year.