China Has a Plan to Crush the Tibetan Diaspora 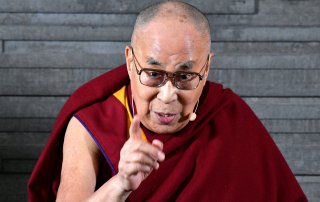 The atheists in Beijing are eagerly waiting for him to die so that they can pick his successor. They will do almost anything to gain control of Tibetan Buddhism—and all religion in China for that matter.

Tibetans wear the robes of tragedy. His Holiness fled China-controlled Tibet in 1959, crossing the Himalayas on foot into India just ahead of Chinese soldiers. He and his followers have now settled into the foothills of Dharamshala.

In that town and around the world, Tibetans are now celebrating the Year of Gratitude for His Holiness, which began July 1. The famed monk, despite the celebration, sees his work is not yet done. “I will also be there for around twenty years,” the Dalai Lama said on June 5, while giving the Bodhicitta empowerment, which is intended to cultivate an altruistic, awakened mind.

June 5 was an auspicious holy day in the Buddhist calendar for it marked the birth, enlightenment, and death of Buddha.

China is particularly interested in the Dalai Lama’s death. When he dies, Tibetans believe he will reincarnate. Beijing has demanded it have the right to pick the successor, who will be the fifteenth of this line.

In normal times, the Panchen Lama and Dalai Lama “recognize” each other’s reincarnations, in other words, choose each other’s successors. The current Dalai Lama recognized the eleventh Panchen Lama on May 14, 1995. That was too bad for the six-year-old Gedhun Choekyi Nyima, the boy he chose. China kidnapped him and his family three days after the Dalai Lama selected him.

Beijing in May announced Nyima, once called the “world’s youngest political prisoner,” is a college graduate and has a job, living a “normal life” as is his disappeared family. He has not been seen in public since his kidnapping, however.

In his place, Beijing chose Gyaltsen Norbu, who lives in Beijing and appears at high-profile gatherings the Communist Party arranges. Most Tibetans—in China and elsewhere—reject him as the true Panchen Lama.

So who chooses the next Dalai Lama now? Beijing passed a law in 2007 stating reincarnations are “subject to an application for approval.” Last year, a Chinese official said reincarnations “must comply with Chinese laws and regulations.”

“Tibet will become only a memory if Beijing succeeds in commandeering the next lifetime of His Holiness,” Moynihan told me. “They will erase Tibetan culture, Tibetan religion, Tibetan identity. Nothing will remain.”

Tibet is called, correctly, an “internal colony” of China. The current Dalai Lama, who retains the devotion of Tibetans, cannot help those inside China’s borders, but he can prevent Chinese materialists from controlling Tibetan spirituality.

His Holiness has indicated his successor need not be from Tibet, need not be a Tibetan, and need not be male. More fundamentally, he has also said he may decide not to reincarnate, suggesting last year that the concept of reincarnation may end forever. In any event, the ultimate decision on reincarnation will be up to the entire Tibetan community, and the public discussion the Dalai Lama started helps prevent China from hijacking the institution of reincarnation.

Everyone, not just Tibetans, has a stake in the outcome of the reincarnation debate. China’s plan to control succession is part of its attempt to eliminate religion in China and reorient the world in its direction. Chinese officials boast of their new model of human rights, economic development, and governance and even hint China should be considered the world’s only sovereign state. Through their global influence campaigns, they are pressuring peoples everywhere.

Perhaps that’s why Congress is getting in on the act. Sen. Marco Rubio (R-Fla.) and Rep. James McGovern (D-Mass.) have cosponsored the Tibetan Policy and Support Act, which would, among other things, provide for sanctions on Chinese officials interfering with the succession of the Dalai Lama.

“For a very long time, both Republican and Democratic administrations have assumed that by giving a pass to the Chinese Communist Party for its repression of its own citizens—including those in Chinese-occupied Tibet—it would work out for U.S. economic interests and those of other democracies,” Mecacci told me. “But the opposite has proven to be true, and the fallacy of such cynicism is now evident. By passing the Tibetan Policy and Support Act, the U.S. would make clear to China that it will not be allowed to annihilate an entire people, including their cultural and spiritual identity, without consequences.”

Both Americans and Tibetans have a common foe in China, so, in this case, everyone should heed the words of the late John McCain. “To view foreign policy as simply transactional is more dangerous than its proponents realize,” he wrote in 2017 op-ed that was published in the New York Times. “Depriving the oppressed of a beacon of hope could lose us the world we have built and thrived in.”

America’s interests and values coincide with the Tibetan Policy and Support Act. This legislation passed the House with overwhelming approval in January and now is now under consideration in the Senate.

At stake is not just one bill. China’s communists demand obedience. They are able to control Tibetans inside their borders today. Tomorrow, with a selection of the next Dalai Lama, they will go after the Tibetans in Dharamshala and elsewhere.

And if they succeed with Tibetans, there will be no stopping China’s neo-colonialist communists. We could, as former Sen. John McCain (R-Ariz.) told us, eventually lose the world.

Gordon G. Chang is the author of The Coming Collapse of China. Follow him on Twitter and Parler @GordonGChang.