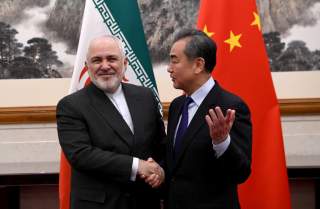 The Trump administration doubled down on economic sanctions against Iran on Monday as China slammed the U.S. pressure campaign for aggravating the new coronavirus outbreak in the Middle East.

Iran is calling for an end to the U.S. pressure campaign that is hindering its response to COVID-19, a deadly new coronavirus disease, even as it rejects smaller offers of U.S. support. The Chinese government has tried to blame the United States for the disease and is now using the U.S.-Iranian spat as another tool in its diplomatic arsenal.

China’s foreign minister called for the United States to “immediately lift unilateral sanction [sic] on Iran” in a Monday social media post trumpeting Beijing’s own humanitarian aid to the Iranian people. In response, an unnamed Trump administration official told Reuters that the Iranian “regime can’t be trusted to channel whatever money it would gain from the easing of pressure toward humanitarian activity.”

U.S. Secretary of State Mike Pompeo said last week that “[a]ny nation considering humanitarian assistance to Iran should seek the release of all dual and foreign nationals” from Iranian prisons.

“We should never be conditioning humanitarian aid. The purpose of humanitarian aid is to save lives, and that has to take priority over any immediate political objective,” Rep. Ro Khanna (D–Calif.) told the National Interest. “We need to be engaged in the world, providing the leadership, and solving the pandemic, and giving help to countries that need it.”

Khanna has long warned that China could soon economically and technologically outcompete the United States. The California congressman, who serves as presidential campaign cochair for Sen. Bernie Sanders (I–VT), added that humanitarian leadership “traditionally has always been the American role, and that should be what America is known for.”

Iran spurned an earlier offer of U.S. humanitarian aid, arguing that the offer was in bad faith while the United States continues to degrade the Iranian economy. Instead, Tehran has demanded an emergency International Monetary Fund (IMF) loan and sanctions relief.

“It’s unfortunate for the Iranian people that their government has rejected this offer to date,” a U.S. State Department spokesperson told the National Interest. “The media should know better than to believe Chinese and Russian propaganda that misleads the public into believing U.S. sanctions are to blame.”

The spokesperson added that “the Iranian people know that any sanctions relief would go to sponsor terrorist, not humanitarian, activities.”

The Trump administration restored some humanitarian exemptions to U.S. banking sanctions in February, allowing Iran to pay for virus test kits. But U.S. sanctions continue to prohibit Iran from importing certain medical devices. And the sanctions have degraded Iran’s economy overall, making it harder for Iranian authorities to implement the kind of nationwide shutdown that China and Italy have used to fight the pandemic.

The Trump administration is now even less likely to ease its pressure campaign against Iran following clashes in Iraq this weekend. A local militia with close ties to Iranian intelligence services killed two American troops and wounded three others at a military base north of Baghdad, and the U.S. launched a round of airstrikes targeting Iranian-backed forces.

“This is the time, especially given the coronavirus epidemic, for restraint,” said Khanna, who helped pass a war powers resolution preventing President Donald Trump from waging war against Iran last week. “The last thing this country can afford is getting into another war.”

“This is a time for us to evaluate what our foreign policy should be, and the threats to us, be it climate change or the threat of disease, and what America is doing more proactively to tackle those,” he concluded.

The U.S.-Iranian dispute comes at an opportune time for China.

China has tried to deflect blame for the new coronavirus, which first emerged in Wuhan, China, in late 2019. Chinese officials insist that the virus could have originated outside of China, and foreign ministry spokesman Lijian Zhao has openly promoted conspiracy theories blaming the U.S. military for unleashing the contagion.

Iranian officials desperate to blame an outside actor have snapped up the conspiracy theories. Ayatollah Ali Khamenei, who serves as both religious leader and commander in chief of the Iranian military, ordered his chief of staff to treat the new coronavirus as an enemy biological weapon.

“As a global crisis, COVID-19 [should] be an area of cooperation between nations,” U.S. military spokeswoman Alyssa Farah wrote in a social media statement. “Instead, the Communist Party of China has chosen to promulgate false & absurd conspiracy theories about the origin of COVID-19 blaming U.S. service members.”