China and North Korea: Is Asia's Dynamic Duo Headed for a Breakup? 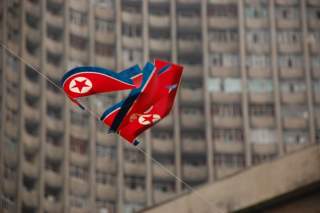 From the autumn of 1950, when Chairman Mao made the costly decision—he lost a son in Korea—to send the “People’s Volunteer Army” across the Yalu River to rescue the retreating Kim Il Sung from General MacArthur’s post-Inchon offensive, Beijing has been the chief guarantor of North Korea’s security. North Korea remains the only nation with which China maintains a defense treaty which requires assistance if Pyongyang comes under “armed attack from any state.” Thus, one would think there would be a measure of gratitude. North Korea’s Kim Jong Un, however, displays disdain for his country’s old ally.

Even with continued Chinese support, North Korea’s remarkable staying power despite famine, the Soviet collapse, and the economic miracle of rival South Korea has been nothing short of amazing. A key element in Pyongyang’s ability to successfully play from what appears to be a weak hand was explained by North Korea expert Chuck Downs in his insightful book, Over the Line: North Korea’s Negotiating Strategy. As Downs points out, the first two generations of the Kim family mastered the art of brinkmanship. This involved creating a crisis through provocative military action, thus drawing the attention of major stakeholders, and then entering into bogus negotiations to defuse “the crisis.” This is followed finally by the payoff in the form of food aid, fuel and other financial assistance. And, under this brinkmanship strategy, having a nuclear stockpile of undetermined quantity and quality is a major plus. Pleas to give up this irreplaceable bargaining chip, even from close ally Beijing, naturally fall on deaf ears—especially when considering the fates of those who surrendered WMD arsenals, like Libya’s Gaddafi and Iraq’s Saddam.

North Korea’s founder Kim Il Sung was masterful in seeking advantage out of the Sino-Soviet split during the Cold War, by playing off Moscow against Beijing. His son, Kim Jong Il, who came to power after the Soviet Union’s collapse, never neglected relations with Beijing, which helped to keep Pyongyang afloat in the post-Soviet era. Never one to indulge in extensive overseas travel, Kim Jong Il nonetheless visited China seven times during his seventeen-year rule. And Beijing came through for Kim during his regime’s greatest foreign-policy crisis. Beijing successfully blocked any UN action directed against Pyongyang when it was accused of sinking the South Korean military vessel Cheonan in March 2010, with a loss of forty-six lives. Kim Jong Il was also keenly aware that China underwrote Pyongyang’s food and fuel needs. In 2003, during Congressional testimony, then-Heritage Foundation official Dr. Larry Wortzel estimated that Beijing provided Kim Jong Il’s regime with between 70 and 88 percent of its fuel requirements and 30 to 40 percent of its food needs. While Kim Jong Il cultivated Beijing, Kim Jong Un bites the hand that feeds him.

Kim Jong Un has been thumbing his nose at his one and only ally—Beijing—ever since his rise to power. The New York Times reported that Beijing dispatched a vice minister of foreign affairs, Fu Ying, to Pyongyang to “sternly warn” Kim Jong Un not to proceed with a missile test soon after his father’s sudden death in December 2011. Beijing was acting to encourage a return to the negotiating table via efforts by U.S. Special Representative for North Korea Policy Glyn Davies to put forward the ill-fated “Leap-Day Deal” on North Korea’s denuclearization. That deal went up in smoke when Kim launched a long-range missile in April 2012 in commemoration of the centennial of North Korean founder Kim Il Sung’s birthday. Kim Jong Un compounded Beijing’s embarrassment by displaying a missile launcher, imported from China in violation of UN sanctions, in a subsequent Pyongyang parade.

Kim did not hesitate to blow off the advice of even China’s leader himself. In November 2012, the New York Times reported that a small delegation from Beijing, led by Politburo member Li Jianguo, arrived with a letter from the new Chinese president, Xi Jinping. The contents of the letter reportedly read: “Do not launch a ballistic missile.” Twelve days later, Kim did exactly that.

Pyongyang’s bête noire again rattled Chinese nerves—and reportedly Chinese dishes near the North Korean border—with an underground nuclear test on February 12, 2013 in the midst of Lunar New Year celebrations, the most important Chinese holiday. Highly irritated Chinese bureaucrats had to abandon family celebrations and rush back to desks in Beijing to deal with yet another crisis generated by their dysfunctional ally. As the Lunar New Year is also an important holiday in Korea, it is obvious that Kim and his minions fully appreciated that this would be especially upsetting for Beijing—which had again warned Kim over further provocations. Beijing went public this time with its displeasure by supporting additional UN sanctions in Security Council resolution 2094 on March 7, 2013. China’s UN Ambassador Li Baoding, according to a Voice of America report, stated that Beijing’s goal in supporting the resolution was “a nuclear-free Korean peninsula, the deescalation of tension and a return to the Six Party Talks.” Pyongyang has repeatedly referred to such sanctions as acts of war.

Chinese bloggers have openly reflected Beijing’s growing exasperation with its erratic ally by posting on the internet uncensored, disparaging nicknames for Kim such as “The Kid” and “Fatty the Third.” This is something that would have been unthinkable during the “as close as lips and teeth” era of Sino-North Korean cooperation.

When the above is considered collectively it explains why there has been no formal invitation for Kim to visit the seat of power of the Middle Kingdom, although both his executed uncle Jang Song-thaek and his former senior advisor Choe Ryong Hae were accorded that honor. An even clearer sign of the displeasure of the Beijing mandarins was apparent when Kim’s South Korean rival, President Park Geun-hye, received an invitation for a state visit to Beijing last year soon after her inauguration. Meanwhile Kim Jong Un, the proverbial wallflower, waits in vain. The Chinese snub was painfully reenforced when President Xi recently made a return state visit to Seoul while still not visiting his North Korean ally.

Kim Jong Un, if not Washington and Tokyo, picked up quickly on the special rapport that has developed between Xi Jinping and South Korea’s President Park, a self-proclaimed aficionado of Chinese culture. While perhaps not as close as the fabled friendship of Reagan and Thatcher, Xi and Park are certainly on much better speaking terms than, for example, Barack Obama and Angela Merkel.

Like a spoiled child scattering his toy soldiers, Kim launched a series of short-range missiles to apparently signal his displeasure with President Xi’s recent stop in Seoul. This latest series of missile launches drew the condemnation of the UN Security Council, of which Beijing is a prominent member, on July 17, in a statement issued by the Council’s president.

Ever defiant, according to South Korea’s Chosun Ilbo newspaper, Kim observed a military drill on an offshore island where the North Korean army used images of the panda, one of China’s national symbols, for target practice around the time of Xi’s Seoul visit. Earlier in the year, the same Seoul newspaper reported that a sign reading “China is a turncoat and our enemy” had been spotted at North Korea’s Kang Kon Military Academy. Not quite as close as “lips and teeth.”

And, even more menacingly, Kim Jong Un apparently chose to conduct one of his periodic missile launches earlier this year directly in the flight path of a Chinese civilian airliner flying from Japan to northeast China. The recent downing of a Malaysian Airlines passenger plane in Ukraine by a surface-to-air missile demonstrates the absolute recklessness of this action.

Kim’s most shocking action, from the viewpoint of filial piety, involved the sudden, public execution of his uncle by marriage, Jang Song-thaek, late last year. Jang was known as a “lao peng you” (old friend) of the Chinese elite and was seen as the possible architect for those economic reforms in North Korea which Beijing desperately wants—both because this would be following in the footsteps of the late Deng Xiaoping and because it would lessen Beijing’s financial burden. The alleged economic crimes used to rationalize “the human scum” Jang’s sudden fall from power included “selling natural resources overseas at cheap prices” and “selling off the land of the Rason economic and trade zone to a foreign country.” These are not very veiled references to Chinese mercantile activities in North Korea. Labeling Jang’s pro-Chinese activities as the actions of a “traitor” is an audacious swipe at the principal insurer of North Korea’s economic viability.

What some would see as further recklessness is Kim Jong Un’s current attempt to play the “Japan card” by cozying up to Japanese Prime Minister Abe with a promise of helping to resolve the long-festering abductee issue. Tangoing with its perceived regional rival is another action guaranteed to annoy Beijing. Further, as a descendant of the esteemed “Baekdu bloodline” of the Kim dynasty, which bases its legitimacy on anti-Japanese guerrilla activities before and during World War II, Kim can only go so far in seeking a thaw with Tokyo before entering potentially dangerous territory.