China Ratchets up Its Namefare Campaign Against Taiwan 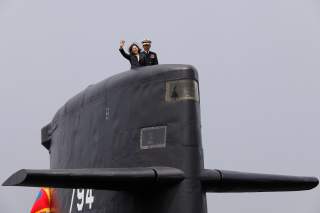 Beijing’s campaign of “namefare” against Taiwan—an attempt to discredit its sovereignty through disabusing others from using the name “Taiwan”—has extended its reach in recent months. Namefare does not rely on deadly weapons like warfare, or pesky rules like lawfare, or public embarrassment like shamefare. Rather, it is an Orwellian attempt to wage war over a name (e.g., Macedonia) to eventually assume sole ownership of its use while disabusing others from using the name.

Most newsworthy of Beijing’s engagement of namefare was the recent censorship of websites belonging to forty-four international airlines over their use of “Taiwan.” Many airlines changed their sites to Taiwan China; China Taipei; Taipei, CN; or simply Asia, East Asia and Northeast Asia without mentioning the country. Other recent namefare efforts by Beijing included forcing the cancellation in late June of a Taiwanese high-school choir from performing at a United Nations building in Vienna and revoking the right of Taiwan to host the East Asian Youth Games. Furthermore, the People’s Republic of China has engaged in multiple threats to multinational companies like clothing retailer Gap, hotel chain Marriott International, medical equipment maker Medtronic and fashion brand Zara over their representations of Taiwan as an independent country.

But just when you thought Beijing’s extraterritorial reach over Taiwan could not get even more trifling, the long arms of Beijing’s censors have extended into Vietnam—not over the name “Taiwan,” but over a symbol of Taiwan, their flag.

Beijing responded in recent days to media reports that Taiwanese companies in Vietnam have been granted permission to fly the national flag of the Republic of China (Taiwan). The reports cited one of the main reasons for flying the Taiwanese flag is to protect the factories from anti-China rioting in Vietnam, which damaged some Taiwanese factories which were mistaken for Chinese-owned factories.

In June, anti-China protests reportedly started at a Taiwanese-owned shoe factory in Ho Chi Minh City, sparked by proposed changes in law to create special economic zones available for a 99-year lease, the protests soon spread to the southern provinces of Binh Thuan, Long An and Tien Giang and the cities of Danang, Hanoi and Ho Chi Minh City.

Many of the protesters I spoke to were angry that the proposed law would allow corrupt Vietnamese officials to sell control of Vietnamese land to Chinese interests. Others were protesting a cybersecurity law—requiring companies like Facebook and Google to open offices in Vietnam and store data locally on its users, which would be accessible to Vietnamese authorities. Many protesters shared a belief that corruption was leaving very little left over for the people, despite an economy growing some 6-7 percent. Additionally, all of them were vocal about the negative view they held of China—not a big surprise given centuries of Chinese suzerainty over Vietnam.   So the notion of factory owners flying a Taiwanese flag to protect their factories from anti-China rioting is not far-fetched. For instance, in May 2014 an angry mob of some 1,000 Vietnamese, thought to be mad over Beijing's deployment of a $1 billion offshore oil rig in Vietnam's exclusive economic zone, set upon a Taiwanese steel mill in central Vietnam. In the rioting, workers were chased out of the mill, buildings were set on fire, and five Vietnamese workers and 16 other workers (described as Chinese) were killed, according to a doctor at a nearby hospital.

The anti-Chinese rioting soon spread throughout Vietnam, including the southern province of Binh Duong, just outside of Ho Chi Minh City. One of the companies attacked by rioters, Kaiser I Furniture Industry Company, suffered some $1 million in losses after being mistaken for a Chinese firm. “Now, we can display the ROC [Republic of China] flag in public,” Kaiser president Lo Tzu-wen said recently. “In the past, whenever an ROC flag was raised China intervened and reported it to the Vietnamese police, who would ask us take it down.”

Unfortunately, Kaiser may be forced to take their flag down again, after the flag-flying controversy was addressed by Chinese Foreign Ministry Spokesperson Geng Shuang in Beijing on July 30. Asked to comment on news the Vietnamese government has allowed some Taiwan businessmen to hang the Taiwanese flag in their factories, Geng replied “China firmly opposes all forms of ‘Taiwan independence’ separatist activities and has lodged stern representations with Vietnam. The Vietnamese side has ordered relevant enterprises to rectify their wrongdoings.”

Vietnamese Foreign Ministry spokeswoman Le Thi Thu Hang responded to these comments afterward, stating, “The local authorities have complied with Vietnam’s consistent policy on Taiwan,” while adding that Vietnam upheld the one-China policy and that flag flying was the decision of individual Taiwanese companies.

While the statements from the Chinese Foreign Ministry would appear to contradict Beijing’s policy of non-interference in other countries’ internal affairs and Hanoi’s response was defiant, Hanoi is likely to capitulate in the face of any additional pressure from China. Vietnam relies economically on China, its largest export market, and Vietnam’s military is a small fraction of China’s. In July 2017 and again in March 2018, Hanoi backed off over pursuing offshore oil and gas drilling prospects in conjunction with Spanish firm Repsol in waters disputed with China—after Beijing threatened to attack Vietnamese bases in the Spratly Islands.

Of course, there are other ways to protect factories, and Taiwanese factories could fly Taiwan's flag only during times of social unrest. Yet flags have not stopped rioters in the past—Japanese, Singaporean and South Korean factories flying their flags have all been targeted by anti-China rioters in Vietnam. But the flag-flying controversy is not really over the obscure debate on whether Taiwan's flag deters anti-Chinese rioters. Instead, it raises greater concerns as to what extremes Beijing will go to in imposing its one-China principle upon other nations, and whether these nations will succumb to diplomatic and economic Chinese pressure. For instance, in February 2017, Cambodian Prime Minister Hun Sen showed his long-standing support for Beijing's one-China principle by banning the use of the Taiwanese flag.

As Beijing intensifies international adherence to the one-China principle, its extraterritorial reach surrounding the usage of “Taiwan” and its flag should be disturbing to all. How long will it be before Beijing starts applying pressure on every other nation which hosts Taiwanese companies to show their loyalty to the one-China principle by taking down the flag of Taiwan?

Gary Sands is a Senior Analyst at Wikistrat, a crowdsourced consultancy, and a Director at Highway West Capital Advisors, a venture capital, project finance and political risk advisory. A former diplomat with the U.S. Overseas Private Investment Corporation, he has contributed a number of op-eds for Forbes, U.S. News and World Report, Newsweek, Washington Times, The Diplomat, Asia Times, National Interest, EurasiaNet, and the South China Morning Post. He spent four years in Ho Chi Minh City from 2014 to 2018 and now lives in Taipei.