China's Incursions into India Are Really All about Tibet 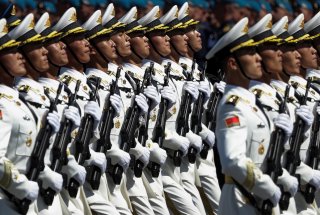 If a stone rolls down a mountain and no one is there to hear it, does it make a sound?

That's the question that lies behind repeated China-India clashes in the high Himalayas, culminating in this spring's deadly skirmishes in Ladakh. The area is so remote that in the early twentieth century, the British occupiers of India and the semi-independent kingdom of Tibet never bothered to demarcate their exact border, and the war-torn Republic of China was unable to assert control over Tibet, never mind establish its borders.

After the proclamation of the People's Republic of China in 1949, Mao Zedong's first priority was the subjugation of Tibet. The following year, the People's Liberation Army (PLA) "liberated" the country, forcing its leaders to sign a Seventeen-Point Agreement by which Tibet "returned to the motherland" of China. A rebellion in 1959 brought the inevitable crackdown, during which the 23-year-old Dalai Lama fled to India. The Tibetan government in exile, known in English as the Central Tibetan Administration, remains there to this day.

It is hard for us today to imagine the incredible remoteness of 1950s Tibet. Even now, there are few roads connecting Tibet's capital city Lhasa to lowland China, and virtually none over the high Himalayas to South Asia. A treacherous mountain road connects Tibet and Nepal via the Sino-Nepal Friendship Bridge north of Kathmandu, and 800 miles to the west an only slightly less treacherous mountain road connects the Xinjiang Uyghur Autonomous Region to Pakistan via the Khunjerab Pass. In between, nothing.

The lack of roads keeps everyone safe, because no roads mean no armies, and no armies mean no wars. When China and India did go to war in 1962, it was over a road. China began construction of National Highway G219, the Sky Road connecting southwestern Xinjiang to the western extremity of Tibet, in 1951. It actually passed through the Aksai Chin region of Ladakh, historically part of India, for more than 100 miles. No one in India even knew about the road until it appeared on Chinese maps, sparking a diplomatic furor.

Despite the heightened tensions, India didn't prepare for war. China did, using the Sky Road as a logistics route for a surprise attack in 1962. In the brief war that ensued, China consolidated its possession of almost the entire territory of Aksai Chin. So it's no surprise that 55 years later, when China started building road infrastructure on the Doklam Plateau bordering southeastern Tibet, India took notice. The non-lethal 2017 Doklam standoff lasted more than two months before being resolved by a mutual withdrawal to the status quo ante.

Why does China so crave these remote mountain territories that it is willing to repeatedly risk war with and make a permanent enemy of one of the world's most powerful countries? The twentieth century is over and China is not preparing for an armored blitzkrieg into the Ganges Plain. It has no ambitions to conquer north India or annex Uttar Pradesh. Its real goals are much more modest, but no less moral. China's border incursions in the remote mountains of northern India are all about its repression of Tibet.

Not autonomy but assimilation

Like the Xinjiang Uyghur Autonomous Region to its northwest, the Tibet Autonomous Region of southwestern China is anything but. Chinese Tibet is a thinly populated highland region the size of South Africa, but with a population of just 3 million. Yet it covers only a portion of the historical territory of Tibet, and is home to only about half of China's Tibetan minority population. The rest of historical Tibet has been carved into "autonomous prefectures" assigned to the neighboring and nearby provinces of Qinghai, Sichuan, Yunnan, and Gansu.

Taken together, the Tibetan territories represent roughly a quarter of the land area of modern China, but account for less than half a percent of its people. That disparity makes Tibetans particularly vulnerable to demographic submersion. Never accorded democratic rights anywhere in China, Tibetans have already been reduced to the minority populations in the provinces that have been allotted what was historically Tibetan land, along with the Tibetans who lived on it. Increasing rail and road links with lowland China raise the prospect that Tibetans may ultimately be turned into a minority within the Tibet Autonomous Region itself.

A new ethnic unity law promulgated in January by the local Communist Party authorities in Tibet has raised Tibetans' fears to a new level. The Tibet ethnic unity law, which is similar to the Hong Kong security law that is now attracting so much global attention, slipped through virtually unnoticed by the international press. It makes ethnic Tibetans themselves responsible for embracing the "motherland" of China and fighting "separatism." It also contains a provision encouraging the relocation of majority Han Chinese people to Tibet -- all in the spirit of ethnic unity, of course.

Like the Hong Kong security law, the Tibet ethnic unity law was apparently a response to pro-independence protests last November and December in Sershul/Shiqu, a county in Sichuan province's Garze Tibetan Autonomous Prefecture. Braving conditions much harsher than those that prevail in Hong Kong, more than thirty Tibetans were imprisoned for advocating independence and calling for the return of the Dalai Lama. The protests follow a decade of self-immolations in which Tibetans have symbolically sacrificed their own lives for the cause of Tibetan autonomy. As in Hong Kong, China now seems determined to ensure that the protests end.

China's expansionism along Tibet's southern border with India thus has a much more limited aim than the acquisition of territory of the conquest of India. It is intended to widen the buffer zone that surrounds Tibet. Trucks and trains may not stream across the India-China frontier, but people and yaks do. China wants to cut off all contact across the border, whether physical or even online. Its infrastructure-building near the Line of Actual Control (LAC) is more likely targeted at controlling its own restive subject population than at provoking an international incident.

In addition to tightening and deepening its own direct (but undefined) frontiers with India, China is attempting to shore up relations with Nepal and Bhutan, the small, landlocked countries that partially separate Asia's two behemoths. Both are home to many Tibetan refugees. In Bhutan, they have the opportunity to live relatively normal lives but are prohibited from protesting against Chinese rule. In Nepal, they are effectively held stateless in former detention camps. China seems to be seeking to incorporate both countries into its border-in-depth, making them, like Aksai Chin, part of the cordon sanitaire between India and Tibet.

The most famous Tibetan refugee of all, of course, lives in India. Tenzin Gyatso, the 14th Dalai Lama, has survived poverty, war, exile, assassination plots, de-platforming, and even the #metoo movement to remain the foremost spiritual leader of Tibetan Buddhism and the Tibetan people. He does not lead the Tibetan government in exile (he gave up all temporal authority in 2011), but he is still seen to speak for Tibet. The Dalai Lama has long advocated a middle way approach that concedes the historical reality that Tibet will remain part of China but demands meaningful self-government for Tibet within China.

For the Dalai Lama and many other Tibetans, that means self-government not only for the current Tibet Autonomous Region but for the entirety of the three traditional provinces of Tibet, including areas that are now administered under neighboring provinces of China. Obviously, the current Chinese regime has no intention of letting that happen, ever. Beijing believes that time is on its side, and with enough repression, it can ensure that it proves itself right. Respecting the authority of the Dalai Lama, Tibetans in exile have so far refrained from instigating violence. But the Tibetan Central Administration is a real parliamentary democracy, and in a democracy, you can only push the people so far. Future Tibetan governments in exile may not be as quiescent as the current one has been.

Much like Xinjiang but much less reported in the international media, China has turned Tibet into a virtual police state within the larger Chinese police state. China has also subordinated its genuine desire for friendlier relations with India to the all-important domestic goal of political control. It may be more than 800 miles from Lhasa to the LAC in Ladakh, but China isn't taking any chances. As it has shown with the Hong Kong security law, the Communist Party is willing to pay any economic price to achieve its political goals. China will pay dearly indeed for picking a fight with India. But for China, money is no object with repression is the goal.