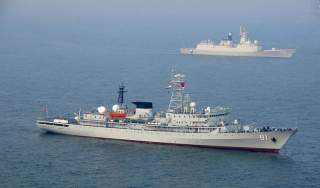 No more hiding its claws, no more biding its time, China has unquestionably entered a new era of assertiveness, casting aside Deng Xiaoping’s decades-long call for moderation, humility, and calculation in foreign policy. China is slowly but surely moving from consolidating its claims on features it has been occupying for decades to dominating the entire South China Sea, gradually achieving the capability to fully drive out Southeast Asian claimant states from other features under their control. Quite naturally, a sense of panic has gripped neighboring countries such as the Philippines, which have been locked in a bitter and seemingly hopeless maritime spat with their giant neighbor. We are no longer just talking about hypotheticals here; China is unabashedly operationalizing its sweeping claims across adjacent waters.

Far from resorting to its frequent tactic of pure obfuscation, the China’s Ministry of Foreign Affairs (MFA)—supposedly, the “voice of moderation” in China’s state apparatus—has become increasingly forthright and lucid in its defense of China’s assertive behavior in adjacent waters. After months of constant denial, China’s feisty Foreign Ministry Spokeswoman Hua Chunying has boldly declared: “China is entitled to set up ADIZs [Air Defense Identification Zone]” in adjacent waters, and a “decision in this regard depends on whether the air safety is threatened and to what extent it is threatened.”

Although, quite ironically, she also dismissed growing speculation that China will stand up an ADIZ in the South China Sea, dismissing it as a possible propaganda ploy by the Philippines and others, and arguing “Under these conditions, I think that individuals [such as the Philippines are] hyping up an ADIZ, that China possibly wants to set one up in the South China Sea, this obviously has ulterior motives." In short, China is entitled to an ADIZ in areas where it exercises “inherent and indisputable sovereignty,” and neighboring countries should just keep silent about it. A few weeks ago, the MFA adopted a similarly indignant and self-righteous position, when it basically asked ASEAN to refrain from saying anything about China’s massive reclamation activities in the South China Sea.

In our democratic societies, transparency is generally seen as a positive thing. But when it comes to the South China Sea disputes, China’s growing honestly is not necessarily a good thing, as it reflects Beijing’s confidence that it can present a territorial fait accompli to its neighbors and a strategic coup de grâce against Washington’s demand for freedom of navigation in international waters.  Yet, China’s strategic hubris is also inspiring a “maritime coalition of the willing” on its peripheries, defying the conventional wisdom that China has supposedly managed to buy the loyalties of its neighbors with its economic largesse. Even the ever-cautious South Korea has become vocally critical and openly outraged by China’s tendency to “try to influence our [South Korea] security policy.”

More than ever, Asia is hedging its bets, fully welcoming Chinese economic incentives in recognition of the relative decline of the West and Japan, but also continuing to look to the United States as an anchor of geopolitical equilibrium in the region.

Back in March, MFA astonished the region and the broader international community when it chose to reveal its broad objectives in the South China Sea, providing the rationale behind its mind-boggling geo-engineering overhaul of the land features in the area. Beijing mentioned “improving the working and living conditions of people stationed on these islands” as among the many supposedly benign purposes of its massive real estate expansion in disputed waters, and claimed “China holds a clear and consistent stance on the South China Sea issue.”

Astonishingly, China described its construction activities as “normal”, since they took place in “our own [Chinese] islands and in our own waters,” therefore, as the argument goes, China is perfectly acting in a “lawful, reasonable and justifiable” manner, and it “hope[s] that relevant part[ies] can take a calm view on this.” The comments echoed China’s Foreign Minister Wang Yi’s equally combative statements earlier this year, when he said Beijing “does not accept criticism from others when we are merely building facilities in our own yard,” since it has “every right to do things that are lawful and justified [within China’s nine-dash-line].”

Interestingly, and to the consternation of its neighbors, China has put an “international responsibility and obligation” spin to its construction activities. China claims that its construction activities provide international public goods such as “maritime search and rescue, disaster prevention and mitigation, marine science and research, meteorological observation, environmental protection, navigation safety, fishery production service and other areas”. In short, China is doing a favor to the international community by building a sprawling military-civilian complex across heavily disputed waters.

China has reportedly offered, when “conditions are right,” its facilities on disputed features for search and rescue and weather forecasting purposes to the United States. China's navy chief Wu Shengli asserted that far from impeding freedom of navigation, its facilities “improve the ability in these seas of public services like weather forecasting and maritime search and rescue, fulfilling international obligations to maintain the security of international seas.”

There are growing signs that China is effectively demanding acquiescence from its neighbors by building facts on the waters, launching a “PR-think tank” blitzkrieg to justify its actions before a Western audience, and gradually restricting the ability of Southeast Asian claimant states to resupply and fortify their position in the Spratly chain of islands.

China is yet to establish an ADIZ, and it ultimately may stop short of formally declaring one. But as I have consistently argued, China has already established the skeleton of an ADIZ, thanks to an emerging network of airstrips and military garrisons on contested features, backed by ever-expanding military and paramilitary patrols across the South China Sea. There are already signs that China is establishing an exclusion zone across the Spratly chain of islands. On at least six occasions, China has recently demanded (and intimidated) Philippine Air Force and Navy planes to cease patrols in the area. Since 2013, Chinese coast guard vessels have also tried to cut the supply lines of the small Filipino military detachment in the Second Thomas Shoal.

Next to Vietnam, which controls approximately 21 features, the Philippines controls the greatest number of features (8) in the Spratly chain of islands. For decades, it has occupied the Thitu Island, the second largest naturally-formed island in the area, which hosts a small Filipino community and an airstrip. Back in 2014, Manila was deeply alarmed over reports that China, potentially through the PLA Navy’s South Sea Fleet, was planning to seize the prized feature. Now, the Philippines is worried over whether it can, over the long run, resupply its personnel and refurbish its facilities on Thitu island, if and when China decides to expand and more decisively operationalize an exclusion zone in the Spratly Islands chain.

The Obama administration has prevaricated on whether it would come to the Philippines’ rescue if direct clashes erupt in the area, but the Philippine-U.S. Mutual Defense Treaty (MDT) could be activated if Filipino vessels and military personnel are directly attacked. But it is not clear how far Washington will go in pushing back against any Chinese attempt to cut Filipino supply-lines short of triggering direct armed clashes, since China will most likely do its best to keep any escalation in the gray zone to avoid the activation of the MDT.

Of course, down the road, one can’t rule out the possibility that China’s “calibrated escalation” will get out of control, as competing claimant states push the boundaries of confrontation. By relying on an armada of fishermen-cum-militia forces, which may not possess the professionalism of conventional armed forces, China’s maritime strategy can go astray. In many ways, China’s construction activities, patrols, and military maneuvers in the South China Sea have gained a momentum of their own. Slowing them down or striking an alternative course would demand significant political capital on the part of the Xi Jinping administration, which is heavily occupied with a high-stakes reform agenda at home. At some point, China may confront a classic “principal-agent problem,” if overweening subordinates, with their own personal and institutional interests, push for alternative, and more dangerous ideas on the ground.

A Maritime Coalition of the Willing

Meanwhile, Washington is also obviously worried about a potential “Thucydides trap,” since its own allies may also choose to be slightly more adventurous in reining in Chinese belligerence in order to test American treaty commitments. But nothing less than America’s strategic primacy in Asia is at stake, and freedom of (military) navigation in the South China Sea could be heavily undermined by either a full Chinese domination of those waters, or an armed conflict in the area. Nonetheless, there are growing efforts to augment the capabilities of China’s neighbors to defend themselves.

By revising their bilateral defense guidelines, Washington and Tokyo are now in a better position to not only push back against China in the East China Sea, but to also support counter-provocation efforts in the South China Sea, especially as Japan contemplates joint air patrols in the area. Through the concept of “collective security,” and the reinterpretation of Japanese constitution in favor of “proactive pacifism,” the Abe administration will also be in a stronger position to help strategic partners such as the Philippines and Vietnam to develop their coast guard and naval capabilities. The Philippines and Vietnam are also exploring their own mini-alliance, potentially paving the way for joint naval and coast patrols, greater diplomatic coordination in regional and international fora, and information sharing in the South China Sea.