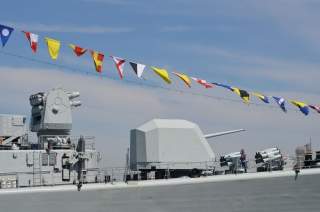 Shortly after Obama’s latest trip to East Asia (on April 23-29), where he sought to deepen Washington’s strategic footprint in the region and reiterate his administration’s commitment to remain as an anchor of stability in the Indo-Pacific theater, Beijing upped the ante by dispatching HYSY981—China National Offshore Oil Corporation’s (CNOOC) state-of-the-art oil rig—deep into Vietnam’s 200-nautical-miles Exclusive Economic Zone (EEZ). Outraged by China’s provocative action, Hanoi dispatched about thirty vessels to the area, which faced off with an armada of Chinese paramilitary vessels escorting the $ 1 billion deep-water oil-drilling rig.

It didn’t take long before there were reports of low-intensity clashes in the high seas, with Hanoi subsequently taking the unprecedented decision to release—despite vigorous Chinese pressure—a video, which shows Chinese vessels using coercive measures against Vietnamese maritime forces. Meanwhile, anti-China protests in Vietnam snowballed into a wholesale destruction of factories owned by, among other nationalities, Chinese and Taiwanese investors—precipitating the exodus of thousands of Chinese citizens to neighboring Cambodia. At this juncture, Vietnamese-Chinese relations entered their lowest point in decades, undermining years of painstakingly established bilateral mechanisms to peacefully resolve territorial disputes in the South China Sea. No wonder Beijing’s recent decision to aggressively take on Hanoi has prompted some experts to announce the birth of a new era of Chinese territorial assertiveness.

Confronting an increasingly uncompromising China, Southeast Asian claimant states such as the Philippines and Vietnam have inched closer to a genuine strategic partnership. Alarmed by the consequences of China’s actions on regional stability and the freedom of navigation in international waters, nonclaimant actors have also stepped up their efforts. Even the perennially polite Association of Southeast Asia Nations (ASEAN) couldn’t hide its panic, with regional leaders expressing “serious concern” over the ongoing disputes in the South China Sea. Meanwhile, Japan—along other Pacific powers such as Australia, India, and South Korea—have sought a deeper role in stabilizing Sea Lines of Communication (SLOC), given the significance of the South China Sea to the energy security and trade interests of all major regional players. In short, China’s territorial assertiveness has further internationalized the very territorial disputes, which Beijing adamantly frames as purely bilateral concerns.

Officially, China maintains that commercial considerations underscored CNOOC’s decision to dispatch HYSY981 to a contested territory, which falls 17 nautical miles south of Chinese-controlled Triton Island in the Paracels. China argues that the latest maneuver was simply a logical extension of previously conducted exploratory surveys in the (supposedly) hydrocarbon-rich area. Based on a conventional interpretation of the provisions of the United Nations Convention on the Law of the Sea (UNCLOS), Vietnam has sovereign rights over the hydrocarbon riches currently under exploration by the HYSY981. Thus, China has violated Vietnam’s EEZ privileges.

According to China’s distinct interpretation of the UNCLOS, however, Beijing can legitimately claim the area, because it falls within the 200-nautical-miles EEZ of the Triton Island, which is currently under the control of China. Through this form of legal interpretation, Beijing has sought to indirectly justify its notorious “nine-dash-line” doctrine, which serves as the foundational document that supposedly accords China “inherent” and “indisputable” sovereignty over almost the entirety of the South China Sea.

Aware of the weaknesses of its sweeping territorial claims, however, China has astutely maintained strategic ambiguity regarding its territorial positions and legal interpretations—further complicating the ongoing disputes. The “nine-dash-line” itself is particularly vague on its exact coordinates and the nature of China’s claims: Is China laying claim to all features in the South China Sea, or, more maximally, also the surrounding waters?

Whenever China engages in a provocative action, which ostensibly violates regional agreements and international law, it tends to resort to a multitude of legal explanations to justify its move. Precisely for this reason, some Southeast Asian claimant states have progressively internationalized the disputes by subjecting their territorial claims—and, by extension, those of China --to third party arbitration under the auspices of the UN.

Through its latest action against Vietnam, China has sought to hit multiple birds with one stone. On the one hand, China tried to reiterate its commitment to uphold its territorial claims in in the South China by openly defying Washington’s call for a peaceful, rule-based resolution of the ongoing maritime disputes, specifically during Obama’s recent visit to Manila. Given the rise of popular nationalism in China, and the growing influence of hawkish elements within the People’s Liberation Army (PLA) in recent years, the authorities in Beijing were hard-pressed to respond to Obama’s pledge of military support to Asian allies amid ongoing territorial disputes in the Western Pacific. The commercialization of the Chinese media landscape hasn’t helped either, since it has created a highly sensationalist coverage of the territorial disputes.

Moreover, China sought to test American resolve to uphold freedom of navigation in international waters and stand by its regional allies shortly after Washington and Manila signed a new security pact, which accords the U.S. military long-term, flexible access to multiple Philippine bases. Beijing was obviously tempted to push the envelope, since the Obama administration has been largely ambiguous on whether Washington would come to the rescue of the Philippines if a conflict were to erupt over disputed features in the South China Sea. By taking on Vietnam, which has no existing treaty alliances with any major power, China upped the ante without risking automatic military response from the U.S. or any major Pacific power. Plus, there is the added value of creating some distraction amid the dangerous escalation of Uighur insurgency in recent months.

In contrast to Japan and the Philippines, especially in recent years, Vietnam has generally refrained from using any provocative language against China, maintaining vibrant communication channels with the top leadership in Beijing. Cognizant of China’s diplomatic sensitivities, Vietnam not only refused to join the Philippines in filing an arbitration case against China, but it was also conspicuously quiet when Manila decided to push ahead with its legal complaint against Beijing earlier this year. And yet, this strategy failed to prevent further Chinese territorial expansion into Vietnam’s EEZ. China’s announcement that it will retain the oil rig within Vietnam’s EEZ up until mid-August carries the real possibility of further escalation.

Meanwhile, the Philippines also released photos suggesting Chinese construction activities on the disputed Johnson South Reef, which falls well within the Philippines’ EEZ. To the outrage of Philippines, the Chinese foreign ministry tried to justify the move by claiming it was “normal” for Beijing to proceed with such activities in areas where it supposedly exercises “inherent and indisputable” sovereignty. Obviously, this was in clear violation of, among other agreements, the 2002 Declaration on the Conduct of Parties in the South China Sea (DoC), which discourages claimant states from unilaterally altering the status quo.

Recognizing the limitations of existing multilateral mechanisms, particularly the ASEAN, a number of Southeast Asian countries have chosen to pursue a minilateralist approach, whereby a limited number of like-minded actors coalesce around a specific issue. On the sidelines of the recently concluded World Economic Forum (WEF) in East Asia, the leaders of Vietnam and the Philippines agreed to step up their strategic cooperation, especially with respect to the South China Sea disputes.

Vietnam is reportedly considering filing multiple arbitration cases against China, and the Philippines has offered extensive legal advice. The two countries are also considering deeper cooperation between their maritime forces, paving the way for increased interoperability and intelligence-sharing among their coast guard and naval forces. To strengthen their diplomatic leverage, the two parties are set to more regularly coordinate their statements and positions in the ASEAN and other multilateral bodies. The two countries have also been encouraged by greater diplomatic engagement and strategic cooperation with Malaysia and Indonesia, which have also been alarmed by China’s growing territorial assertiveness. In a highly symbolic gesture of deepening bilateral relations, and their joint commitment to resolve maritime disputes in a peaceful manner, the Philippines and Indonesia recently signed a new border agreement after two decades of high-stakes negotiations.

The deepening cooperation among Southeast Asian claimant states, especially the Philippines and Vietnam, is part of a broader network of alliances in the Pacific theatre. As Washington encourages its regional allies to bear greater responsibility for regional stability, Japan has emerged as an increasingly consequential partner to both the Philippines and Vietnam. Undeterred by Japan’s pacifist constitution, the Abe administration has carved out an important role in regional affairs by relaxing self-imposed restrictions on arms exports, increasing Japan’s defense spending, and advocating the principle of collective self-defense to allow Tokyo to more credibly serve as a counterbalance to China. Under the newly installed Modi administration, India is also expected to play a more pro-active role in regional affairs, with Japan emerging as a critical strategic partner. Meanwhile, Australia has progressively enhanced its military interoperability with the United States, with a growing focus on ensuring freedom of navigation in international waters.

Overall, China’s territorial assertiveness seems to have inspired a flexible, regional network of like-minded countries that are intent on preventing Chinese (intended) domination of SLOCs, and maintaining freedom of navigation in international waters, which is crucial to those countries’ own national security and economic interests.