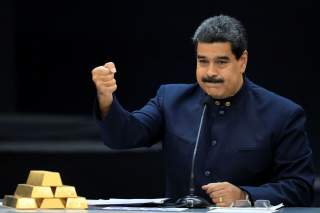 China is extending its economic, military, and political influence in the Western Hemisphere and, while the short-term benefits are appealing, countries in the region should be wary of long-term consequences.

At the Summit of the Americas in Lima, Peru in April, it was clear to me in my conversations with regional leaders that many U.S. partners are looking for U.S. leadership. They see the U.S. as their partner of choice, and they prefer doing business with Washington over China.

However, Beijing's offers are appealing because they have a lot of money and they don't play by Western standards of transparency, the rule of law, and democratic principles. Besides, the U.S. has lacked enthusiasm in the Western Hemisphere due to other crises in the world demanding Washington's attention.

That is no longer the case. With a new Secretary of State and a President focused on solving the Venezuela crisis, the U.S. is looking at the many opportunities for investment and stronger partnerships. The administration is also concerned about China’s increasing reach into Latin America and the Caribbean.

Although China's seemingly-unlimited resources and no-strings-attached approach to its investment deals make it appear an attractive partner, it ultimately does not deliver the economic prosperity it promises. Instead, those deals advance Beijing's goals to secure access to energy resources and new labor markets while providing limited economic benefits for host countries- even making conditions worse in some instances.

This was most evident in China's ventures in the region's energy sector where it has invested over $105 billion since 2005. More than half of that is concentrated in Venezuela. China financed oil-for-loan deals to secure direct access to Venezuela's vast natural resources. As a result, Beijing's investment has exploited Venezuela's natural resources and its people's wealth.

Beijing’s less-stringent and less-transparent investment conditions and safeguards inclined Venezuela to spend without bounds. This spending, combined with the Maduro regime’s gross mismanagement of the economy, corruption, and attacks on democracy, fostered the conditions for the region’s worst humanitarian crises.

Chinese loans for infrastructure projects throughout Latin America have also almost exclusively financed projects for Chinese companies, which often export Chinese workers to complete the projects. In some cases, these workers overstay their visas, displacing local populations and limiting their access to job opportunities.

Furthermore, Chinese investment also encourages poor governance and perpetuates corruption in the region. Chinese banks, including the China Development Bank and China Export-Import Bank, have provided financing for several Latin American countries that have struggled to combat corruption and uphold the rule of law.

Beijing makes no effort to help these countries fight such problems as the U.S. does. Instead, its financing perpetuates the problems, robbing these countries and their citizens of reaching their potential for achieving greater prosperity. Additionally, Beijing's investments have also created openings for organized crime.

In some cases, Chinese funding has helped to indirectly sustain anti-U.S. actors, such as Venezuela and Bolivia, which behave as Chinese satellite states on many issues. The lure of Chinese lending has further turned some countries away from more traditional lenders, such as the International Monetary Fund, World Bank and Inter-American Development Bank. Those conventional lenders provide economic safeguards, and transparent policy conditions, to encourage reforms that stabilize economies and promote economic growth- China's do not.

Beijing is also wielding cultural and political influence in the region to achieve geostrategic outcomes. It has aggressively advanced its efforts to manipulate public perceptions in the region towards its interests. China has done this through state-sponsored propaganda entities disguised as educational and cultural exchanges, such as the Confucius Institutes, journalist training events, and study-abroad programs.

Washington sees the fruit of Chinese efforts with the recent changes in diplomatic recognition by Panama and the Dominican Republic in favor of China, breaking previously long-standing ties with Taiwan. These developments have left only ten countries in the Western Hemisphere that recognize Taiwan.

Also, for the first time, China attended the Summit of the Americas in Lima and was selected to host the Inter-American Development Bank’s annual meeting in Beijing, even though China makes up 0.004 percent of the bank compared to the U.S.’s thirty percent share.

Moreover, China has also advanced its military interests by selling arms to the region, participating in exercises and military exchanges, and sponsoring military education and training courses. Needless to say, Beijing’s decision to secure a market for Chinese defense technologies and to institutionalize security relationships may present a security risk in U.S.’s hemisphere.

The Chinese reach into the Western Hemisphere is strong and multifaceted, and it is expanding in ways that threaten regional stability and undermine longstanding U.S. interests.

I believe the U.S. is up to the task of reminding our friends in the region of these concerns and to advancing a compelling U.S. hemispheric-wide agenda to strengthen partnerships and take advantage of the vast potential facing our region today.

Congressman Paul Cook represents the 8th District of California and is Chairman of the House Foreign Affairs Committee’s Subcommittee on the Western Hemisphere. Cook served as an infantry officer and retired after 26 years as a Colonel in the U.S. Marine Corps. During his time in combat, he was awarded the Bronze Star and two Purple Hearts.

Image: Venezuela's President Nicolas Maduro speaks during a meeting with the ministers responsible for the economic sector at Miraflores Palace in Caracas, Venezuela March 22, 2018. REUTERS/Marco Bello TPX IMAGES OF THE DAY