Chris Wallace Was The Worst Debate Moderator In American History 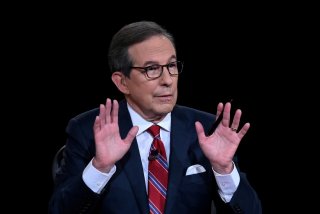 President Donald Trump acted true to form in his debate with former Vice President Joe Biden. Forget the president’s boasts, misrepresentations, and exaggerations that seemed to virtually color his every sentence. Rather, what mattered was his utter lack of common courtesy, of respect for his opponent, of comporting himself in a manner that befits the leader of any nation, great or small. Trump’s constant interruptions, his endless attempt to over speak, or over shout Biden, were his 2020 version of his aggressive circling behind Hillary Clinton while she spoke during their debates four years ago.

Biden, to his great credit given the circumstances, was a gentleman, trying his hardest to deal with facts, but constantly being forced to respond to Trump’s increasingly wilder insinuations and allegations.

Trump was no winner in this debate. And there was certainly a loser—Chris Wallace was the worst moderator of a presidential debate since these were first held sixty years ago. He constantly let Trump interrupt, and consistently allowed the president to have the last word. He simply could not control the debate, which naturally worked in the president’s favor, since for Trump, rules only exist to be broken.

What the American people will make of the debate is an open question. Hardline Trump supporters will certainly support their man. Left-wing Democrats will sigh despondently at Biden’s reasonableness, at his unwillingness to condemn the police or to advocate for the Green New Deal and other socialist-leaning excesses so precious to the Bernie Sanders crowd. Trump, of course, did all he could to link Biden to Sanders, to Obama, and to that great Trumpian bugaboo, Hillary Clinton.

Biden now faces a dilemma. By all rights, he should refuse to enter into another circus with a man who consistently finds new ways to demean his office and, in so doing, the country he is meant to lead. On the other hand, should Biden refuse to debate Trump, the president can be counted upon to call him “a loser,” “a coward,” and heaven knows what else.

Trump no doubt will be buoyed by his performance. His game plan was to discombobulate Biden, to make him look senile, to throw him off-balance. He signally failed to do so. Nevertheless, he drowned out too much of Biden’s serious efforts to make a reasonable case to the American people. He will certainly want to do so again in another debate.

What can Biden do? Should he try to mimic Trump and constantly interrupt the president, he will not succeed. At some point, because he is a decent man, he will shy away from sinking further into the mire that is Trump’s natural debating habitat. Instead, Biden should make Trump look foolish. He should get under the president’s notoriously thin skin. Sarcasm, along the lines of Lloyd Bentsen’s famous retort to Dan Quayle—“I served with Jack Kennedy, I knew Jack Kennedy, Jack Kennedy was a friend of mine. Senator, you are no Jack Kennedy—may be the only way to deflate his opponent.

That and fortitude. The majority of Americans are sensible people. They may or may not believe Trump’s unsupported assertions and mischaracterizations of all sorts of facts. But they are not going to respond well to consistent, untrammeled rudeness. They might tolerate it in one debate, but certainly, they will be disgusted if the president reprises his behavior in a second debate. If Biden can maintain his dignity, as he did during this first debate, and puncture the bumptious bully that he faces across the debate stage, the majority of American voters may well reprise to this president Leo Amery’s call to Neville Chamberlain eighty years ago, “You have sat too long here for any good you have been doing. In the name of God, go.”