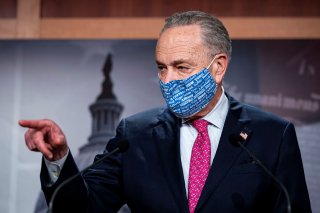 Chuck Schumer (D-N.Y.) secured his long-awaited goal of being the Senate majority leader in the most recent election, adopting the responsibility to steer both sides of the aisle out of a partisan gridlock after Congress tottered through mob violence on the U.S. Capitol, a House impeachment and intra-party division in a post-Trump era.

“I need to catch my breath, so much is happening,” Schumer said on the Senate floor just minutes after being declared majority leader.

In his newly assumed role, Schumer is expected to maintain unity within his diverse Democratic caucus while rallying Republican support on future legislation, particularly involving the economic and public health crises that have served as centerpieces in President Joe Biden’s political agenda.

But after acting as majority leader for roughly a week, Schumer has already received pushback from the GOP, as they’ve rejected Biden’s domestic agenda and balked at backing another big spending measure to pump federal funds into the economy and into the pockets of millions of Americans after Congress passed a $900 billion bipartisan relief package just last month.

Some crucial rank-and-file Republicans have also voiced opposition in specifically working with Schumer to swiftly pass legislation, including Sen. Susan Collins (R-Maine), who told CNN last week that it’s “absolutely true” that she would have a difficult time personally trusting the new majority leader. She did note, however, that she trusts Biden and other Democrats.

Collins cited the majority leader’s silence after her 2020 election win, as she pushed through brutal, public attacks from Schumer-backed groups that accused her of stealing money from the drug and insurance industry, a campaign blitz that was “deceitful” and “despicable,” according to Collins.

“What this campaign taught me about Chuck Schumer is that he will say or do anything in order to win,” she told CNN.

Schumer’s outspoken Democratic Senatorial Campaign Committee tactics aimed at knocking down the Republican majority on Capitol Hill have come back to haunt him, as the majority leader now needs bipartisan cooperation to quickly check the boxes on Biden’s legislative agenda and alleviate boiling pressures from his far-Left colleagues.

While Schumer’s relationships with individual colleagues could impair bipartisan behavior, experts think that overall party differences will be the biggest hurdle during the next two years.

“Individual leaders and their personalities aren’t inconsequential in the Senate, but much more important are the differences between the parties on policy and the incentive that the minority party faces to obstruct what the majority wants,” Molly Reynolds, a senior fellow in Governance Studies at The Brookings Institution, said. “This is especially true in a period of unified party control, where the party that controls the House, Senate and White House is under more pressure to demonstrate that it is capable of governing and the party that controls none of those three has little incentive to hand the party in power wins.”

But in order to grant the Democratic Party legislative victories, particularly relating to the economic downturn and the coronavirus pandemic, Robert Shapiro, a professor and former chair of the Department of Political Science at Columbia University, suggested that Schumer must use all party wings to balance the vigor from the Left and Right.

“He will do this with Biden by both of them going as far left as they can through reconciliation legislation, where the most conservative Democrats will limit how far they can go,” Shapiro said.

Shapiro noted, however, that it’s unlikely that “Republican legislators will support anything beyond aid to deal with vaccination and the virus's health effects and aid to individuals and businesses doing least well economically.”

And in the midst of Schumer's attempt at being the majority leader, Democrats on the Hill have linked tight to try and regain control of the upper chamber.

“He has held us together the last four years despite having senators that go from Bernie Sanders to Joe Manchin,” Sen. Chris Coons (D-Del.), referring to the more progressive to the more moderate sides of the party, said. “It is harder in the majority.”

Despite the supposed Democratic unity, far-Left members of the party have previously blasted Schumer for tapping into his ties at Wall Street in order to fundraise and rise to power within the chamber. Rumors have also swirled over an upcoming primary challenge in 2022 against Rep. Alexandria Ocasio-Cortez (D-N.Y.) for his position in the state, a snag that Schumer has heavily considered, as the Brooklynite continues to make in-person and virtual appearances with groups in New York.

Schumer’s most recent congressional headache, however, relates to the debate over whether Congress should nix the filibuster, a procedural tool with a sixty-vote supermajority requirement to move most legislation, and a minority party weapon to block or set the pace for certain bills.

“I think Schumer’s biggest challenge right now is determining what, if any, elements of the various proposals to address the health and economic crises could receive enough Republican support to overcome the threat of a filibuster,” Reynolds said. “If the answer is that none of them can, and Democrats choose to use the budget reconciliation process broadly, then he will need to determine how aggressively his caucus is willing to use those procedures.”

Most Democrats and progressives want to gut the filibuster so that more liberal policies can be quickly passed without Republican support.

Warren and other Democratic colleagues pivoted to the fact that McConnell blocked former President Barack Obama’s Supreme Court nominee Merrick Garland through the filibuster, which is a notable reversal to his current position in securing the filibuster relating to legislation. Republicans have moved to erase the 60-vote margin for all Supreme Court nominees and other judicial business.

But two moderate Democrats have come forward to maintain the 60-vote threshold, including Sen. Joe Manchin (D-W.Va.) who told reporters Monday, “We’ve got to come together, so I do not support doing away with the filibuster under any condition. It’s not who I am.” The distanced stance with the rest of the party prompted McConnell to relent his demand over preserving filibuster rules in the power-sharing agreement with Schumer after an ongoing standoff over the rights of the minority to stall legislation.

The agreement provides for equal partisan representation on Senate committees and hands Democrats committee gavels. Republicans were the chairs of the committees even in a Schumer-led Senate, as the upper chamber waited for results from negotiations between the now-majority leader and McConnell.

While Schumer has declared a win after McConnell cached his priority as part of the agreement, this likely indicates that Democrats will not be able to banish the filibuster for at least the next two years, as Manchin and Sen. Kyrsten Sinema (D-Ariz.) back protecting it.

It took Democrats nearly a decade to take back control of the upper chamber, so Schumer lies under seething pressure to uphold priorities from the Biden administration, the far-Left and moderate members of the party in his first jab at being the Senate majority leader, ever.

“He’s a very ideological guy in many ways but he's also a creature of the Senate in his own way,” Graham said. “He’s going to have to somehow deal with the energy of the left and create space for Biden to put some points on the board.”