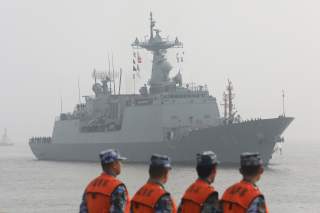 Over the last two years, Washington’s view of China has shifted substantially. During that time, the United States has taken concrete actions against Beijing, including economic sanctions, the scrutinization of questionable political and economic policies, more assertive freedom of navigation operations (FONOPS), and removal of China from Rim of the Pacific (RIMPAC) 2018. However, these actions have done little to stem Beijing’s bold maritime moves, specifically in the South China Sea (SCS). Instead, China continues to militarize outposts and take aggressive maritime actions that weaken stability in the region and jeopardizes critical trade routes and resource-rich waters.

All countries in the region need to come together and confront Beijing’s actions with a revamped maritime strategy that includes establishing a SCS Multinational Combined Task Force in order to check China’s aggression and interrupt their capacity to dominate in the SCS. Building consensus among regional and external partners will not happen overnight. But a concerted phasing plan that includes increasing multilateral exercises and FONOPs in the SCS will move those efforts in the needed direction.

Militaries structure themselves into combined task forces during real-world operations to achieve maximum interoperability and effectiveness. However, China is acting in the gray zone, a state between peace and war in which it attempts to make gains towards its national interests using tactics below the level of armed conflict. These tactics are difficult to counter. Along with thinking of new ways to counter China’s aggression in this gray space, the United States, regional, and external nations must consider organizing along the lines of structures used in traditional armed conflict as a deterrent to China’s strategy.

Over the years, the United States has generated a solid base of exercises that could play a role in this revamped strategy. The U.S. Department of Defense “Indo-Pacific Strategy” report highlights the need to strengthen its network of allies and partners through exercises and law enforcement activities. The goal of these exercises is to improve interoperability and to deter and counter China’s excessive territorial expansions and claims through presence and bilateral and multinational cooperation. Currently, the United States holds five annual and biennial multilateral military exercises (CARAT, Cobra Gold, Khaan Quest, RIMPAC, and SEACAT) with a wide range of ASEAN member states. Additionally, from September 2 to September 6, 2019, the inaugural ASEAN-U.S. maritime exercise was held in Southeast Asian waters, including the SCS.

Other nations with a vital stake in the region, such as Australia, Japan, India, and South Korea regularly conduct exercises with the United States in the various regional waters as well. Such exercises include Talisman Sabre, Malabar, Keen Edge, Keen Sword, and Group Sail. At times, some of these exercises have taken place in the SCS. For example, this occurred during Group Sail in May 2019, where a U.S. guided-missile destroyer conducted drills with a Japanese aircraft carrier, two Indian naval ships, and a Philippine patrol vessel in the SCS.

Despite a robust exercise schedule, there is room to strengthen and modernize this approach. First, the United States should seriously consider holding RIMPAC 2020 in the SCS. The significance of the world’s largest international maritime exercise being held in the SCS just two years after the United States disinvited China from participating will demonstrate that the United States and over twenty other nations are willing to take tough actions to protect their shared values.

But exercises only go so far in deterrence. There must be a considerable ramp-up in FONOPs.  Recently, the United States is making progress in this area. On November 19, at a media briefing in Manila Defense Secretary Mark Esper said, “the U.S. is conducting more patrols in the South China Sea to send a signal to China that it intends to maintain freedom in the area that’s crucial for global trade.” He went on to say that the United States has conducted “more freedom of navigation operations in the past year or so than we did have in the past twenty-plus years.” This trend must continue. However, purely unilateral FONOPs are proving to be insufficient in preventing Beijing from blocking regional countries from accessing their own resources.

The United States officially maintains the position that its FONOPs “are not targeted at any particular country, and they have no bearing on sovereignty disputes over land features.”  Therefore, the United States does not differentiate between excessive maritime claims made by China and allies and partners. The time has come to alter this stance. China may be considered the most egregious offender of excessive maritime claims and must be officially highlighted as such. Let’s not be deterred from calling a spade and spade in the name of diplomacy when China’s intentions are clear.

Efforts to substantially increase multilateral operations in the SCS and publicly declare them as multinational FONOPs should be led by the United States. A good start down this path is the Quadrilateral Security Dialogue. At a speech to the Heritage Foundation U.S. Secretary of State Michael Pompeo said that “we’ve reconvened ‘the Quad’—the security talks between Japan, Australia, India and the United States that had been dormant for nine years.” And although the current Indian Government does not want to militarize the Quad and is wary of taking an overtly anti-China security position, it is in India’s best interest to reverse this stance. Most importantly, this policy move needs to be further advanced through actions, such as combining ships from the four nations on a FONOP in the SCS. Instead of being categorized as an exercise, there should be public acknowledgment that these activities are aimed at confronting China’s excessive claims.

Beyond 2020, the most consequential step needs to occur. The United States must take the lead in establishing a standing SCS Combined Task Force with a multinational command structure charged with planning, coordinating, and executing the efforts of various countries conducting FONOPs in the SCS. The task force ought to consist of units from the “Quad,” ASEAN, other allies and partners, and be accessible to any nation that feels threatened by China’s actions. Rather than just exercising with the goal of interoperability this force must focus on detection, monitoring, and deterrence operations against China.

This policy will be described by Beijing as a major escalation and could push them to establish similar arrangements with any countries that remain outside of the task force structure. But more importantly, it will create ambiguity in the thought process of Beijing leadership — a key step in maintaining the upper hand in deterrence.  Furthermore, the task force will disrupt China’s current strategy in the disputed sea.

Admittedly, persuading the region’s nations to participate in such a coalition is a mammoth undertaking. If broached today with the regional countries, then the answer most assuredly would be that it is politically impossible for such a combined task force to sail together in this manner. There are vast assortments of national interests and priorities among the region’s countries, let alone the ASEAN nations. For ASEAN, many of these countries are not only disputing the SCS claims with China, but amongst themselves as well. But understanding that territorial and historical disputes exist, these nations would do well to focus on the common and much more strategically significant issues with China. Moreover, this structure will provide a meaningful platform for productive discussions on the other inter-nation disputes.

Of course, for the region’s nations to agree to such a task force, the United States will need to change its direction in other aspects of its national power, including the way it conducts its diplomacy and economic actions. Multilateral solutions must underpin the broader strategy. The United States needs to prove that it is committed to its allies and partners and will not leave them to ward off China alone—diplomatically, militarily, or economically—when times inevitably get tough. A better whole-of-government approach between the Department of Defense and the Department of State will be necessary to pull off this endeavor. For starters, the United States should walk back its demands that South Korea pay nearly $5 billion to support U.S. military forces in the country.

Some also point out that the continued growth of the Chinese military capabilities in the next few decades will produce a situation where no opposing military rivals will be able to operate with impunity or tactical superiority within the first island chain or likely even the second island chain. Thus, under those circumstances, the SCS Combined Task Force concept will be irrelevant and tactically useless when a conflict begins. However, this strategic certainty is precisely why the SCS Combined Task Force must be established now; to counter China’s growth today and make it a longer road for them to achieve their desired strategic footprint.

This strategy revamp is ambitious, but achievable with time. China cleverly used time combined with an effective information campaign to lull the world into complacency and achieve its current status. The sooner leadership from all countries work together towards this approach, the sooner China will be encouraged to adhere to the international rule of law.