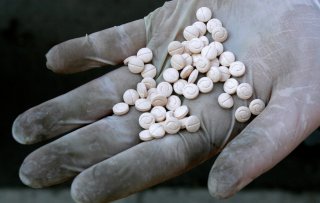 The 2022 National Authorization Act (NDAA) will soon go to the Senate for a vote, and with it, an amendment that seeks to address one of the most ignored byproducts of the Assad regime’s rule in Syria: the Captagon drug trade.

While the illicit trade of Captagon, an amphetamine-type substance, has emanated from Syria for years, there has been a recent, noticeable shift that demands attention from U.S. policymakers and regional partners. Since the drug trade arrived in Syria in the mid-1990s, Captagon production and smuggling primarily persisted among non-state actors and terrorist organizations that produced and traded Captagon in small quantities. However, as the Syrian economy faltered and the Assad regime grew more desperate for alternative revenue streams, the estimated $3.5 billion Captagon trade has transformed Syria into a narco-state, with industrial-sized production that has overwhelmed regional law enforcement systems and has stuffed the coffers of the regime and its partners, Lebanese Hezbollah and Iran’s Islamic Revolutionary Guard Corps-backed militias.

The proposed 2022 NDAA amendment, proposed by Congressman French Hill (R-AR-2), is a first and necessary step for the United States to get a pulse on the Syrian Captagon trade and identify ways to disrupt it. While Captagon has been on the radar of U.S. national security agencies for years, a lack of coordination, adequate monitoring, and strategic planning on how to successfully counter the trade between U.S. departments and agencies have put the United States and its partners far behind the curve.

Captagon shipments continue to overwhelm regional law enforcement systems, with Saudi Arabia receiving millions of Captagon pills camouflaged among licit goods like oranges, pomegranates, cocoa beans, and grapes at its land and maritime ports. Similarly, Jordan has struggled to keep up with the trade, as its forces lack the necessary resources and personnel to intercept all suspicious cross-border shipments and contend with violent cross-border clashes with traffickers. And across the Mediterranean in Europe and Africa, seizures of Syrian-sourced Captagon have become more frequent, found smuggled in pizza ovens, cardboard cylinders, and industrial equipment.

Despite limited Drug Enforcement Administration (DEA) efforts in joint investigations and intelligence-sharing with Captagon destination and transit countries, the United States and its allies lack a coordination mechanism—let alone a shared strategy—to manage the Captagon trade. Furthermore, the accelerating normalization of an Assad-controlled Syria among regional governments and even intergovernmental organizations such as Interpol, have made it increasingly difficult to counter, let alone monitor, the Captagon trade. Seizure evidence of smuggled Captagon shipments and law enforcement interdictions have enabled greater public awareness about the trade and its nexus with the Assad regime, but there is still little known about the drug’s chemical formula, how it is produced, how it is transported, and its transnational consumer markets.

It is vital that U.S. national security agencies converge upon an internal strategy that first seeks to understand the Captagon trade’s infrastructure and illicit actors’ modus operandi in order to properly counter it. The 2022 NDAA amendment’s proposal for an interagency strategy between the Department of State, Department of Treasury, Department of Defense, DEA, and other federal agencies, as well as an awareness campaign promoting accountability among Captagon’s illicit actors, should be a necessary step to countering the Captagon trade and strengthening the 2020 Caesar Act without having to pile on additional sanctions.

The Captagon trade has rapidly accelerated into a regional Mediterranean challenge that demands increased attention from the United States and its regional partners. It is crucial that the amendment to the 2022 NDAA receives bipartisan support as a testament to the United States’ interest in countering a regime and a narcotics trade that has come to terrorize so many.

Caroline Rose is a Senior Analyst and Head of the Power Vacuums Program at the New Lines Institute for Strategy and Policy, where she researches ungoverned spaces, contested territories, geopolitical flashpoints, and post-withdrawal security landscapes, with a focus on the Middle East and the Mediterranean. She tweets at @CarolineRose8.